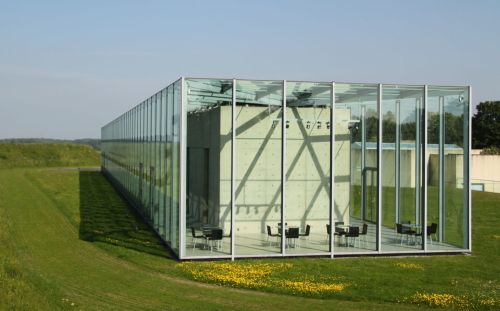 The Ratekenstation (Rocket Station) Hombroich – a missile base no more.

Mr Karl-Heinrich Muller is now my favourite German real estate agent. Who else buys a NATO missile base and turns it into an art museum? END_OF_DOCUMENT_TOKEN_TO_BE_REPLACED

CIRCUM-LAKE-UTION – cycling round the Bodensee 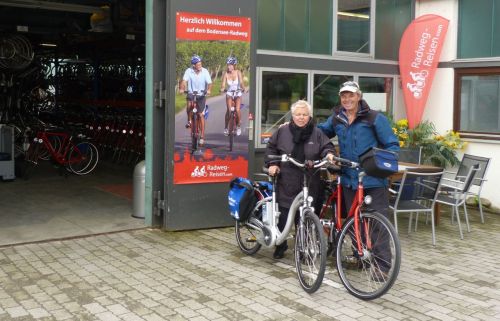 Will we have as much fun as the people in the picture?

The Sydney Morning Herald recently published my article about our epic ride around Lake Constance on Europe’s most popular cycling route, so now I can release the full story on the blog…

I’m regularly reminded that my wife is smarter than I am. She doesn’t need to do the reminding personally; usually it’s only too obvious. On this trip she’s riding an electric bike. END_OF_DOCUMENT_TOKEN_TO_BE_REPLACED 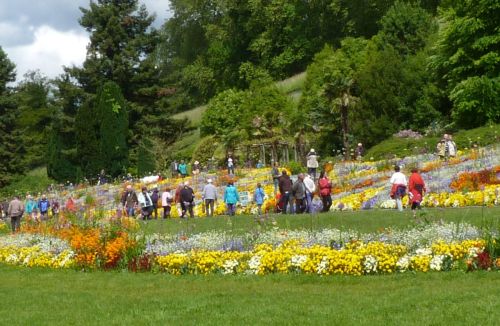 You expect to share it with other photographers and mobile phone users.

If the Dutch Keukenhof is the most photographed place on the planet, Insel Mainau is the German equivalent.

Maybe what’s left of the Berlin Wall or Neuschwanstein Castle narrowly pip it as subjects for German holiday snaps, though even that is doubtful. END_OF_DOCUMENT_TOKEN_TO_BE_REPLACED

THE EMPEROR, THE COURTESAN, THE POPE AND THE ARTIST

Imperia, holding the emperor in one hand, the pope in the other.

Of course not everybody likes it. It’s disgusting, pornographic, offensive and historically inaccurate.

Love it or hate it, you can’t ignore the public art of sculptor Peter Lenk, when it’s given pride of place by the harbours of Konstanz, Meersburg and Uberlingen. END_OF_DOCUMENT_TOKEN_TO_BE_REPLACED

That white stuff is snow on the mountains. It probably fell yesterday.

What a difference a bit of sun makes! Nearly seventeen degrees today, so off came the Goretex jackets (though they were kept handy, just in case.)

It was a day for a leisurely 38km on the flat, with vineyards on one side and the Bodensee on the other. It was a day for a long lunch with a generous glass of local wine, without getting too schlossed. It was a day for browsing a couple of museums and a compulsory gloomy castle. And finally it was a day for sitting by the water with a Greek dinner (‘my cousin live in Brisbane’) with a Zeppelin buzzing lazily overhead. END_OF_DOCUMENT_TOKEN_TO_BE_REPLACED

I’m sure I’m not the first tourist to suffer cathedral fatigue. I’ve heard about the ‘ABC’ of travel – ‘another bloody city – another bloody cathedral.’ I’ve never taken any interest in gothic architecture, so why should I suddenly find it fascinating just because I’m in Cologne?

But a tour of Cologne’s biggest attraction quickly becomes fascinating, because guide Franz’s stories help us reflect on the beliefs, endurance, ingenuity, and sometimes gullibility of those who constructed and used this cathedral through the centuries. Cologne Cathedral is not just about architecture, or Goths for that matter – it’s about people.

Secret church services were held on this site in the second or third centuries, when Christians were still persecuted, but things only really got going in 1164, when the bodies of the three Magi were transferred here from Milan. Pilgrims flocked to Cologne to see them, and still do.

It was St Helena who originally brought the Magi to Europe, along with other ‘holy’ relics she found conveniently lying around when she made her trip to the holy lands. She may not have been the first gullible tourist to be sold fake artefacts by local shysters, but Helena was Constantine the Great’s mum, so when she returned with her souvenirs, few dared challenge their authenticity.

The Magi were relabelled ‘Three Wise Kings’ to avoid any confusion with street magicians, and in 1248 the Cologners started work on a cathedral to accommodate them. The kings now lie in a gold, jewel-encrusted sarcophagus, behind bullet-proof glass, ‘to protect the jewels,’ says Franz, ‘rather than to preserve the relics.’

Once a year at Epiphany, the casket is opened and visitors can peer inside. The kings have been enhanced over the years. Crowns have been added to make the bones look more royal, but since they couldn’t be fitted on the recumbent skeletons, authorities removed the skulls for the coronation.

Scientific examination established that the bones belonged to gentlemen who died aged about 55, 35 and 15. No problem, said the cathedral authorities quickly; it’s perfectly possible that one of the kings could have been a boy.

Once the Kings were interred there, other customers wanted to RIP close to them, hoping it would somehow speed their passage to heaven. The honour was reserved for archbishops only, but in 1371 Duke Gottfried of Alsberg paid a fortune to get his place by the Kings. He was an unpopular inclusion, so his supine statue is covered with an iron cage to deter vandals.

Despite financial contributions from the likes of Gottfried, the money ran out in the sixteenth century, and the builders ran out soon afterwards. The ancient crane that had been used to haul stone to the tops of columns creaked to a halt, perhaps to the relief of the six convicts who’d had the unenviable job of operating it, running on a treadmill like human hamsters.

The crane stayed motionless for the next three hundred years. For centuries Cologne was known as the ‘city of the crane’. Then in 1824 more funds were found and work resumed on the twin towers. Thanks to the new technology, the spires and the cathedral façade were completed in a mere 38 years and the cathedral became the tallest building in the world. 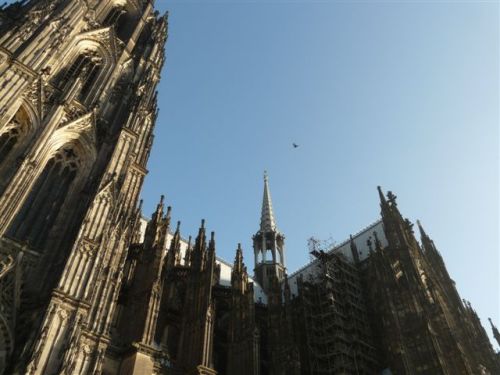 The cathedral’s mosaic floor is also a 19th century addition. Prior to that, the floor was covered with the graves of noblemen. Unfortunately the stones covering them made imperfect seals, so recently buried bodies tended to emit an unpleasant odour, which according to Franz gave rise to the phrase ‘stinking rich’. I thought it could have given rise to the phrase ‘odour Cologne’, but I wisely kept that pun to myself. Until now.

Masochists can pay a small extra fee to climb the 509 steps up the south tower. Yes, of course I did it, and without oxygen too. The narrow spiral staircase is not recommended for the claustrophobic. It was a relief to pause halfway up to admire Fat Peter, the world’s biggest suspended bell, who is seldom rung and is naturally closed for Lent. Any more fun could be dangerous to us.