WANDELING IN LEIDEN (it’s a place in Holland) 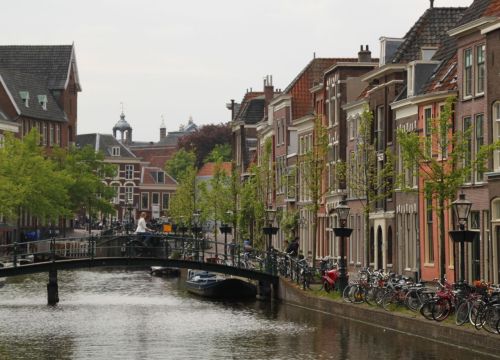 ‘Wandeling’ is one of my favourite Dutch words. It simply means a ‘walk’, but it suggests wandering and ambling.

That’s just what Mevrouw T and I were doing in the lovely Dutch university town of Leiden. END_OF_DOCUMENT_TOKEN_TO_BE_REPLACED

If nobody buys them I’ll eat them myself.

So here we go. After the royal succession last year, Koninginnedag (‘Queen’s Day’) has become Koningsdag, as Willem Alexander’s birthday is celebrated with a festival of orange across the nation.

The actual day of W-A’s birth, 26th April, is conveniently close to when the event used to be celebrated, former queen Juliana’s birthday, 30th April. (The King’s mum, Beatrix, was born in January, when the weather is generally not conducive to a giant street party.)

Amsterdam’s ever lovely Vondelpark is reserved for the kids of the city to earn some pocket money by performing, running games of skill and chance and selling surplus Barbies and Bob the Builder DVDs.

My camera was there too, for a fun day out. END_OF_DOCUMENT_TOKEN_TO_BE_REPLACED

Is there any safer place to ride?

I confess I was shocked to read the figures in the recent post on Mark Wagenbuur’s excellent website Bicycle Dutch.

Of course any one of those 184 deaths is tragic, but if we’re talking statistics we need to consider other figures too.

The estimated total distance cycled by Dutch riders was a staggering 14.8 billion kilometres in 2012. That’s about one death for every 740,000km* ridden, making the Netherlands one of the safest countries in the world in which to ride a bike.

More concerning to me is that 67% of the cyclists killed were over 60. We ageing pedallers are probably less likely to be riding recklessly than young gung-ho immortals, so we have to recognise that our bodies are more vulnerable and that our balance, eyesight, hearing and reflexes are not what they once were. We need to ride accordingly.

On the other hand, having so many older people still riding must overall be good for the nation’s public health.

Helmets are not compulsory in the Netherlands and in practice few cyclists wear them when riding around town.

(*suspect figure – should perhaps be much higher. See Glen’s comment below. )

Saltaire gets the colourful Hockney treatment.

Build a smart new museum and someone will complain that it lacks soul. Convert an old industrial site to a cultural facility and it immediately becomes a cool place.

Thanks to what is turning out to be an inspired home exchange, Mevrouw T and I are spending the Easter break in Saltaire, West Yorkshire. END_OF_DOCUMENT_TOKEN_TO_BE_REPLACED

THE GUGGENHEIM IN HOLLAND – Cobra Museum

Karel Appel’s playful sculpture outside the Cobra Museum in Amstelveen.

I feel well disposed towards artists who admit they really don’t understand what they’re doing.

“I just mess around a bit,” said Dutch artist Karel Appel; and it became the most famous thing he ever said in his life.

Appel’s work and that of his 1950s contemporaries from COpenhagen, BRussels and Amsterdam is celebrated in the COBRA Museum in Amstelveen, just outside Amsterdam. The museum’s permanent collection is one of the Netherlands’ greatest treasures.

This year, Appel and his fellow Cobras have been joined in Amstelveen by work from New York’s Guggenheim. Pollack, Rothko, de Koning, Poliakoff and others splashed, dribbled and daubed colour onto canvas, apparently at random, yet by some magical process the effect is wonderful. We thought the exhibition was fabulous, and highly recommend it to anyone who’ll be in Amsterdam over the next few months. END_OF_DOCUMENT_TOKEN_TO_BE_REPLACED

By the Amstel River. ‘Amster-dam’ = ‘Dam on the Amstel’, remember?

We’ve just arrived back in Holland, the breeze is gentle and the rain won’t be with us for two more days. So what better way to fight the jetlag than a ride through the Dutch countryside?

One of the most hit-on posts on this blog is my brief list of Holland’s Prettiest Villages. I decided I’d see how many of them I could manage to ride around in a day. My route took me through Ouderkerk aan de Amstel, Abcoude, Weesp, Naarden, Muiden and back to Amsterdam. A respectable 72kms, plus a few where I forgot to switch the computer back on.

If that seems a bit energetic for Day 1 in the saddle, let me confess up front that Mevrouw T kindly offered me use of her electric bike. I know, that’s cheating, but we thought the beast should be tested again, before we take it farther afield.

It was indeed a lovely ride, and the bike’s electric booster left me energy over for photography. END_OF_DOCUMENT_TOKEN_TO_BE_REPLACED