A sunny spring day, a gentle breeze, horses grazing in lush fields, a cuckoo in the woods, the rattle of machine guns and the soft clump of a mortar. This is one of the Netherlands’ oldest and largest national parks, the Hoge (high) Veluwe. It also contains the greatest private art collection of the early 20th century.

Until now I’ve been lucky enough only to have heard machine guns on film soundtracks. When you meet them in the wild, they’re frighteningly loud, even at what I hope is a safe distance. The Dutch army has a base near the Hoge Veluwe and there is serious weapons training going on behind the warning notices. The area is apparently ‘Levensgevaarlijk’ (’deadly dangerous’).

It was a far more dangerous place in September 1944. This was the site of Operation Market Garden, the massive airborne assault on nearby Arnhem during WWII, dramatized in Richard Attenborough’s film A Bridge Too Far.

The Airborne Museum and war cemetery in the village of Oosterbeek remind us of the story. Nearly 50,000 American, British and Polish troops were dropped into the area by parachute or glider with the mission to capture the Rhine bridges and bring a quick end to German occupation of the Netherlands. They met heavy German resistance and, cut off from their support and taking appalling casualties, they were forced to retreat or surrender. The war dragged on through another winter, during which thousands of Dutch people starved to death.

In the dimly-lit bowels of the Airborne Museum I pass through the simulated ‘airborne experience’; it’s not one anyone would want to experience for real. I’m surrounded by life-sized model soldiers, shattered buildings, burned out vehicles and a deafening soundtrack of shooting and shelling. Then at the exit there are the casualty lists – thousands of dead, wounded and captured on both sides, in a cause which was already all but won and lost.

Apart from that background gunfire, things are mercifully peaceful in the High Veluwe now, as they were in the 1920s when Helene Kroller-Muller and husband Anton assembled the greatest art collection of its day, now displayed in the museum that bears their name, in the lovely national park which was once their family estate.

The sculpture garden of the Kroller-Muller Museum - for mine, Nederland's greatest art gallery

It’s unusual to buy a ticket to an art museum and be offered a free bike. The Kroller-Muller Museum is set in nearly 6000 hectares of forest and heathland. It is possible to drive through the park to the museum, but cycling 3km on one of the park’s white bikes is a pleasant option for anyone who’s up for it.

Mevrouw T and I can feel slightly superior to the white bike hoi polloi, having already ridden our own bikes ten kilometers up the cycle path from the town of Ede. Not that it was difficult. ‘High’ is a relative term in Dutch geography and there is nothing more than a gentle slope up to the Hoge Veluwe.

The enormously wealthy Kroller-Mullers aimed to ‘bring art and nature together in an exceptional setting’, and the museum’s sculpture garden does this brilliantly. The rhododendrons are not yet flowering, but the lakes and lawns are a perfect backdrop for large-scale sculpture with Auguste Rodin, Henry Moore and Jean Dubuffet as star attractions. 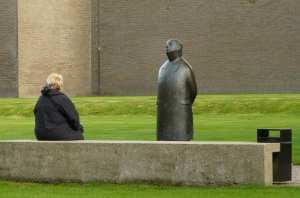 Inside the museum are fine examples of work by the usual suspects, Picasso, Monet, Pissarro, Renoir, though most visitors have come to see Helene’s van Gogh collection. She bought 87 of his paintings and 180 drawings, including a few classics – The Sower, The Potato Eaters and Terrace of a Café at Night. The family suffered a major financial squeeze in the late 1920s, so to keep the land and the art together, they sold both to the Dutch state at a knockdown price. Now it’s public property, and we’re delighted.

We pedal through the national park, keeping a lookout for the deer, wild sheep, wild horses, and wild boar which are reputed to lurk here. Unfortunately we don’t see any of them, but I do glimpse a wild mouse crossing the cycle path.

A few kilometres north of the museum, we come to the Kroller-Mullers’ former home, Jachthuis Sint Hubertus, open for guided tours. When you can afford to put one of Europe’s greatest architects on your payroll for a few years, telling him money’s no object, you expect to get a pretty special house. Hendrik Berlage was already famous as the architect of Amsterdam’s stock exchange, and in designing a pad for the K-Ms he was able to express himself to the full. The jachthuis (hunting lodge) was completed in 1920 and, in today’s terms, the building cost 65 million euros (around $100 million). Ouch!

Jachhuis Sint Hubertus - this is the holiday house you get for 65million euros.

An artificial lake was dug to reflect Berlage’s tower, served by only the second electric lift in the country. Berlage intended the house itself to be a work of art, rather than just containing works of art. Every tile, cupboard door, and stick of furniture was designed or commissioned by the architect, and it works a treat. 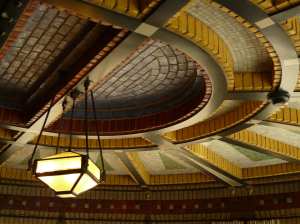 Berlage loved his tile work - even on the ceilings

The army is still busy shooting things when we emerge, but as we ride to Apeldoorn to catch the train back to Amsterdam, the stunning visual memories linger, while the sound fades into the background, and then is heard no more.

Getting there: Several trains per hour run from Amsterdam to Ede-Wageningen, EUR23.40 ($30) return, and from there buses run to the Kroller-Muller Museum every half hour. Total trip takes 1.5-2 hours.

Staying there: Hotel Restaurant Paasberg in Ede has double rooms from EUR70 per night, B&B. For other accommodation options see arnhem-tourism.com
Further information: Entry to the Airborne Museum, Oosterbeek is EUR8. See airbornemuseum.org. Entry to the Hoge Veluwe Park including use of bikes and Kroller-Muller Museum is EUR15. Guided tour of Jachthuis Sint Hubertus EUR3. See hogeveluwe.nl