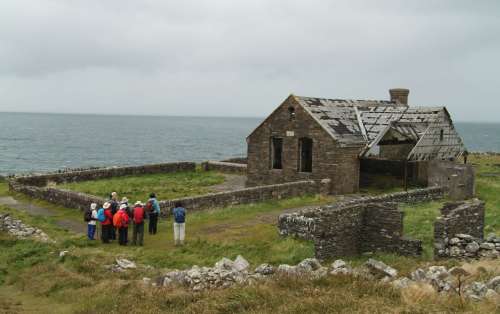 The old school house can still teach visitors a thing or two.

There wasn’t much going on in the village of Dun Chaoin (Dunquin) perched on the end of the Dingle Peninsula in County Kerry, Ireland. Until 1970, when film director David Lean arrived to make Ryan’s Daughter.

The place sparked up for a year and a half as filming ran way over time and over budget. When shooting finally finished, Lean offered to leave the village sets there as a tourist attraction. The residents couldn’t see the point of that, according to our guide John from South West Walks – the film sets would make useful firewood and that was about it.

DVDs of the film are on sale in every souvenir shop in the area. I’ve seen Ryan’s Daughter, but remember little of it. I know it’s not Mr Lean’s most highly regarded work, and certainly not as memorable as his epics Bridge on the River Kwai, Lawrence of Arabia and Doctor Zhivago.

What I do remember from it is John Mills playing the village idiot, Michael, a role which won him an Oscar as Best Supporting Actor. I’m sure he was good, although the academy voters always seem to me unduly impressed by actors who play people with disabilities – think Dustin Hoffman in Rain Man, Daniel Day Lewis in My Left Foot, Geoffrey Rush in Shine, Colin Firth in The King’s Speech. They’re all fine actors who delivered excellent performances, but it’s easier than it looks to stammer, limp and twitch a bit.

But back to Ryan’s Daughter. On a spectacular headland looking across to Great Blasket Island stands the only surviving relic of the film – the old school house. It was nice to stand on the spot where Sarah Miles and Robert Mitchum had been.

‘KD’ and ‘GG’ have tried to attract attention by adding their initials to the gateposts. Yes, we noticed you, and we think you’re dickheads.

The school set from Ryan's Daughter. Note the separate entrances for boys and girls.

The writer was the guest of South West Walks and Utracks.