The Dutch look after their cyclists; maybe no country in the world has better bike infrastructure. But since everybody rides a bike there, they all get very good at it. If they don’t, they’re in trouble.

It’s not my photo; it’s from The Dutchables.

But was this really taken in Holland? The cars seem to be on the wrong side of the road.

Thanks very much to all the people who referred me to their favourite cycling quotes. There were a huge number of visits to this site (for a Tuesday) and lots of excellent suggestions. This is my favourite, and worth a post on its own. I don’t know who wrote it, but a bit of googling has it first appearing in 2001.

“In the beginning God created the bicycle, saw that it was good, then went for a nice Sunday ride on the bike lanes He’d made the day before, and they were good, too, because they were new and He had the angels keep them clear of debris. Later, of course, God would get cross and have the flood wash all the good ones away.

And God said to Himself, Let us create man, because cycling is too much fun to keep to Myself, and so He created man, him did He create, create did He him do. And God put man in paradise, and commanded him, Glideth upon the earth anywhere thou wisheth, except for that big hill over there. For on the day thou goeth down that hill, thou shalt surely die.

And God said, Man needs a companion to keep him from spending too much money on new bicycles. So God caused man to fall into a deep sleep by asking him if he wanted to go clothes shopping at the mall, then took a rib from him. Then God said to Himself, Who am I kidding, I’ll never hear the end of it when she finds out she was just a rib, so He created woman from frankincense and myrrh and a certain je ne sais quoi.

Thanks to my correspondent John Myers of Bicycle Victoria, who sent me this selection of quotes from famous bike lovers. It makes for interesting reading, considering the sad fates of many of the celebrities quoted…

“It is by riding a bicycle that you learn the contours of a country best, since you have to sweat up the hills and coast down them. Thus you remember them as they actually are, while in a motor car only a high hill impresses you, and you have no such accurate remembrance of country you have driven through as you gain by riding a bicycle.”
Ernest Hemingway (suicided)

Nothing compares to the simple pleasure of a bike ride.”
John F. Kennedy (assassinated)

GREAT VIC BIKE RIDE 2010 – gearing up for a new adventure 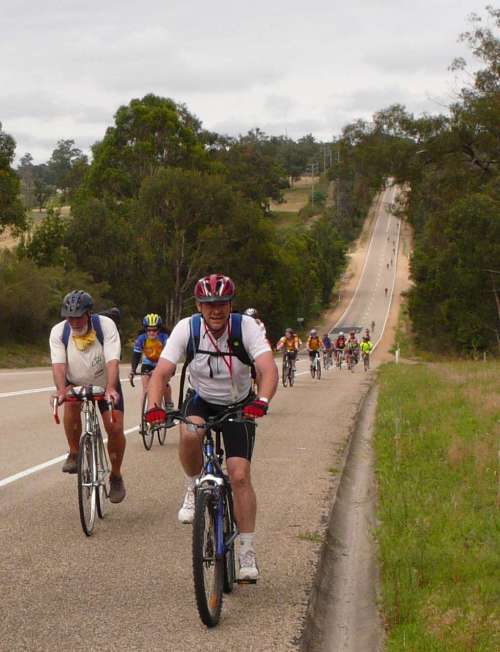 After three years of doubt and hesitation, I’m ready to face this fabulous event again. My son expressed interest in doing the Great Vic Bike Ride and when the Young Bull throws down a challenge like that, the Old Bull has to prove he has something left in the tank. Also we can enjoy the bonding experience of standing in shower queues together. There’ll be 4998 other riders, so it takes a while to get everybody clean. END_OF_DOCUMENT_TOKEN_TO_BE_REPLACED

LEICHHARDT – Sydney’s cheesy little Italy is saved by the coffee

Dante is still deciding whether to approve of the Italian Forum...

This week I’ve been writing a brief, edgy, alternative tourist guide to Sydney. We’ve lived here for over thirty years and like most residents, we don’t often do touristy things and our lives are seldom edgy and alternative. However, a job’s a job, and it was an incentive for me to have a look around town…

I recommended that visitors start the day with a pulse-quickening coffee, and suggested that in Sydney that means a trip to the suburb of Leichhardt, the heart of Sydney’s Italian community. Café Sport in Norton Street built its reputation on serving the best coffee in Australia, but since decent coffee has now spread all over town I hadn’t been there for years. END_OF_DOCUMENT_TOKEN_TO_BE_REPLACED

It's somewhere over there...

Shh – don’t tell the muggles! I found one! A geocache…right there, approximately where the website said it would be. All I had to do was to take my bike on a 40km ride, wheel it down a muddy track where nobody goes, apart from birdwatchers and mosquitoes , look around for a few minutes, reach my hand into a promising spot, brush away the red-back spider webs and there it was – my first geocache!

No, of course I’m not telling you where. You’ll have to find your own one. There are more than 1.2 million of them out there somewhere, as you can see if you look at the geocaching website. www.geocaching.com

All I can say is that using my GPS was not all that important. In fact, the co-ordinates on the website and the co-ordinates on my GPS gave readings at least 10 metres apart, leaving me a reasonably large area to search in. Having found it, I spent a minute or two running down the list of people who found it before. There were about thirty of them, the most recent one a month ago. I wanted to add my name to the list of jubilant finders, but I couldn’t. Next time I’ll take a pen with me.