Everyone rides a bike in Amsterdam, but that’s just the problem. If you avoid getting sideswiped by a bus, you may tangle with another bike, probably pedalled by a tourist just as bewildered as you are.

So try cycling into the countryside, the healthy green alternative. You’ll survive. You’ll enjoy it. I always  do. 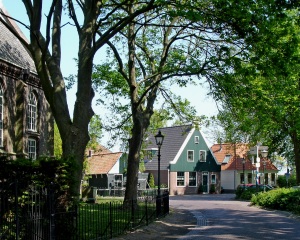 Rent a bike at any of the hire places close to Amsterdam Centraal Station and ask for a map of ‘Waterland’, north-east of the city. You can join an organised cycle tour to take you there, which is fine if you want to meet Knut from Norway or swap travellers’ tales with Betsy and Brad from Ohio. But if you’d rather save a few euros and ride at your own pace, you can easily go off on your own.

Check your tyres and saddle height, trying to look competent. Note that there’s no need to actually ride yet. The front of Centraal Station is a confusing nightmare of roads going in all directions, with trams, taxis and buses raising the degree of difficulty, so it’s not the ideal place to start your Dutch cycling career.

Instead, wheel your bike through to the back of Centraal. Behind the station people wait for little blue ferries, which putter across the North Sea Canal to “Buiksloterweg”. Fear not – you won’t have to pronounce the word, just hop aboard. Don’t fumble in your pocket for euros; the ferries are free. They’re for bikes and pedestrians only, and take just two minutes to reach the other side. 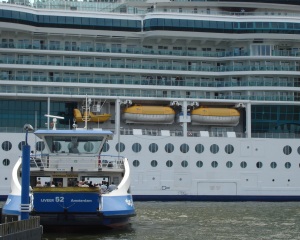 Once there, pretend to check your tyres again and wait while the cool racing riders in their revealing shorts speed into the distance. There’s a wide, flat cycle path in front of you. I repeat – wide, flat, cycle path. No cars, no-one watching, so wobble as much as you like. Turn off at a friendly sign, “Schellingwoude” – (don’t even think of saying this out loud). Then it‘s a doddle to roll along the bike path through shady parks beside the North Holland Canal. Even without gear changes or special cycling legs you’ll get out under the Amsterdam Ring Road in about twenty minutes. 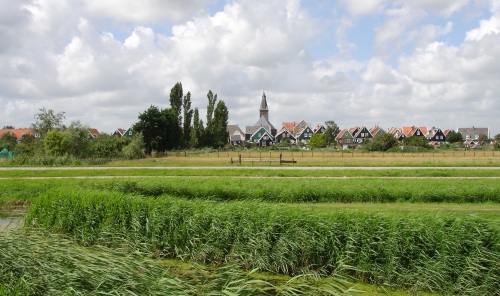 Welcome to Waterland. There are cows grazing in green fields, ducks on canals, little white bridges, church towers poking up out of distant villages and flat bike paths everywhere. There are signposts at every intersection, and even if you get lost it won’t matter because it’s all so stunningly pretty. 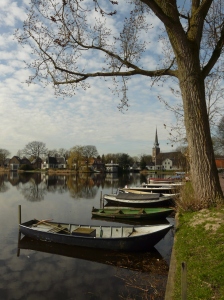 Where you go now is up to you. A quiet 20-25km loop through old villages Zunderdorp and Ransdorp, out to Durgerdam, and back to Amsterdam will take about two hours, including a coffee break. If you’re up to riding all day and doing 75km, you can eat cheese in Edam, ride the dyke to historic Marken, zip down to Nieuwendam and still be back in town for a pre-dinner beer. There are lots of middle roads between these gentle and masochistic alternatives. 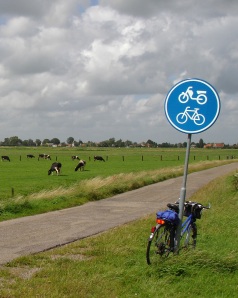 So, first through the polders, those fields rescued from total sogginess by the little canals cut through them. The villages of Zunderdorp, Zuiderwoude and Broek in Waterland are notable for their old houses and churches. It’s apparently compulsory here to have geranium pots by your windows and massed pink and purple hydrangeas in a lush garden. The farms look so prosperous they couldn’t possibly be real farms. Surely they’re country retreats owned by merchant bankers. Or are subsidies so generous in this area that a farmer with ten cows can also afford six horses?

The wetlands between the fields are protected nature reserves. There are oyster-catchers, lapwings, redshanks, a kestrel (okay, I’ve got a bird book) and thousands of geese. Every canal has its ducks, coots and resident white swans.

It’s quiet, but you won’t have the road all to yourself. You’ll meet sporty types on matching his and hers touring bikes. A mother rides with a toddler mounted on her handlebars and older children on their own bikes proudly weaving alongside. From time to time peletons of wannabe Rabobank riders whip by in tight formation. Then there’s that older couple riding at a snail’s pace, but always turning up in front of you, no matter how often you overtake them.

Sorry if you were hoping to see old windmills. Out here they’re modern ones, converting that wind you’re cycling against into clean green electricity. The power lines in the background sometimes spoil a good photo, but this is right outside a major capital city, so what did you expect? 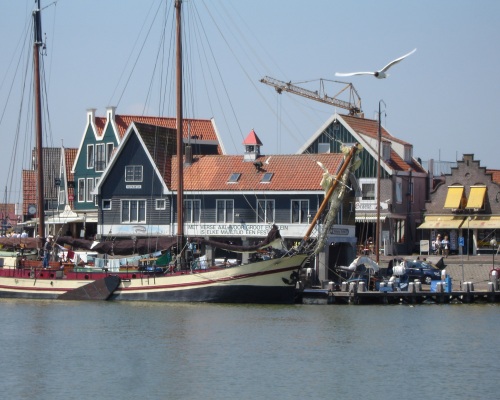 If your legs are still functioning, follow the signs to Monnickendam, Volendam and Edam. According to my dictionary,  ‘dam’ is Dutch for dam, and there are lots of them in Waterland. What used to be the Zuiderzee (South Sea) is now cut off from the North Sea by a massive dyke and has become a lake, the IJsselmeer.

Many bus tours stop in Volendam, so it’s the perfect place to shop for “I love Holland” baseball caps, but Edam and Monnickendam are my favourites. During the summer, Edam puts on a popular cheese market show on Wednesday mornings, with men in silly costumes running round carrying huge trays of the stuff and tossing it on to horse-drawn carts. It’s very crowded but fun, in a cheesy sort of way. Monnickendam is quieter, quirkier and still a working shipyard. It’s a fine place to stop at a café for “koffie and appeltaart”, neither of which are prohibited substances under amateur cycling rules.

Head east along the dyke to the island of Marken. Yes, you can ride a bike to this island, because since 1952 it’s been connected to the mainland by a causeway. In the old days, Marken fisherfolk wore colourful traditional dress. Now Marken’s main industry is selling postcards of colourful fisherfolk. However, the green wooden houses, perched on stilts or built on mounds to keep their feet dry, offer great photo opportunities, as does the lighthouse on the tip of the island. 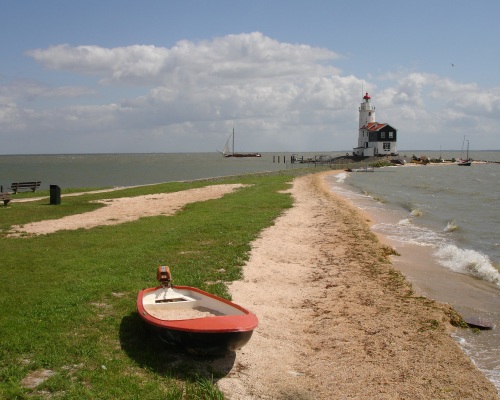 Your backside is probably telling you it wouldn’t mind a hot bath some time soon. So turn for home past Durgerdam, with its row of fishermen’s cottages, and along Nieuwendammerdijk, recently voted ‘Amsterdam’s second most beautiful street’ in a newspaper poll. Winner was the Brouwersgracht in the centre of town, but the mere fact that Nieuwendam can claim to be part of Amsterdam suggests you’re nearly back in the big smoke.

See – you survived Waterland! As the ferry chugs over to Centraal you have two minutes to consider keeping that bike and riding it round town tomorrow. Good luck!

RECOMMENDED MULTI-DAY RIDES IN THE NETHERLANDS:

ZEELAND – bikes on dykes in the south

Macbike at Amsterdam Centraal Station has rental bikes from 8.50 Euros a day.