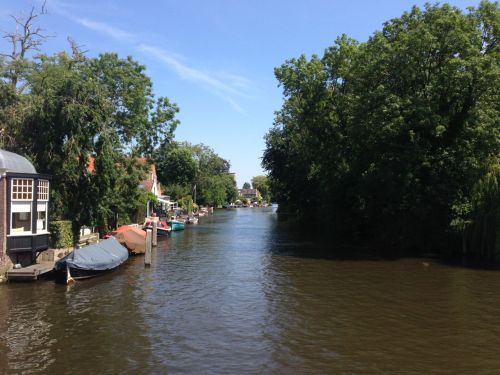 The Vecht at Loenen.

It’s our last week in Amsterdam for this year. Time for one more bike ride, this one with my friend and guide Hans, down the Rhine Canal to Loenen, between the lakes to Ankeveen, along the winding River Vecht to Weesp, and home again.

The wonderful thing about cycling here is that even after years of exploring the area around Amsterdam on two wheels, there are still new routes for us to discover, all of them with quiet, safe, all-but-car-free cycle paths.

The Rhine Canal connects Amsterdam with Utrecht and beyond. It’s designed for barges of course, but note the bike path beside it.

It’s a bit inconvenient to climb up to this bridge with a bike, but they have thought of cyclists. Note the groove for wheeling the vehicle. And once on top, there are two car-free bike lanes.

After a koffie stop in the village of Loenen, we followed the narrow bikes- and pedestrians-only path through the lakes Wijde Blik and Loenenveense Plas. A new route for me, and a lovely one. 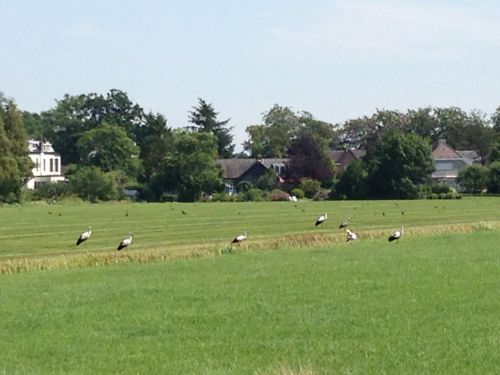 Storks had nearly disappeared from most of the Netherlands until a few years ago. They’re reasonably common now, though I’ve never seen seven of them together before.

Here’s another one of those paths, fairly busy with bike traffic during school holiday time. But everyone is patient and considerate. 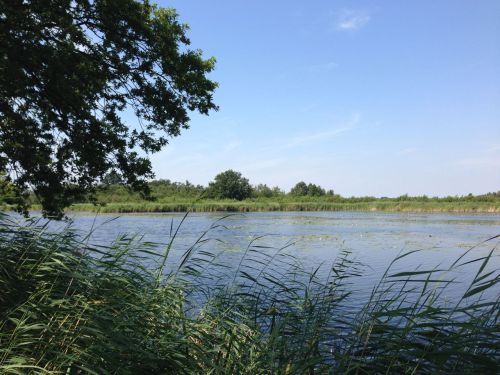 Why wouldn’t they be, with the Ankeveensche Plassen to enjoy? 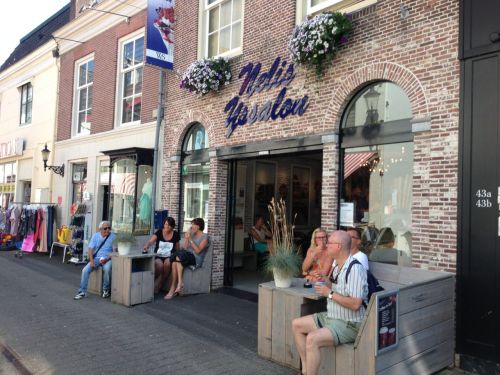 Only some 20km left to ride, so we’ve earned an ice-cream in Weesp. Highly recommend Neli’s popular establishment!

Thanks, Hans, for the company and the tour guiding!

Here’s the route we took. 80km of it, in a leisurely five hours, with many stops for koffie, ice-cream, photos and rear-end recovery.

4 responses to “DUTCH CANALS, RIVERS AND LAKES – cycling the Vecht”