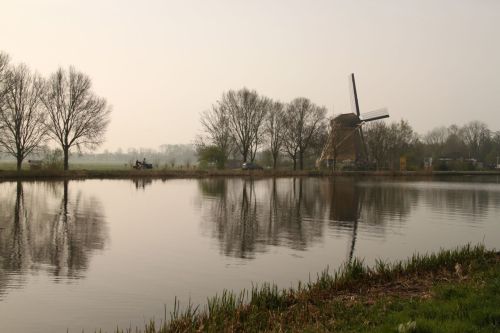 By the Amstel River. ‘Amster-dam’ = ‘Dam on the Amstel’, remember?

We’ve just arrived back in Holland, the breeze is gentle and the rain won’t be with us for two more days. So what better way to fight the jetlag than a ride through the Dutch countryside?

One of the most hit-on posts on this blog is my brief list of Holland’s Prettiest Villages. I decided I’d see how many of them I could manage to ride around in a day. My route took me through Ouderkerk aan de Amstel, Abcoude, Weesp, Naarden, Muiden and back to Amsterdam. A respectable 72kms, plus a few where I forgot to switch the computer back on.

If that seems a bit energetic for Day 1 in the saddle, let me confess up front that Mevrouw T kindly offered me use of her electric bike. I know, that’s cheating, but we thought the beast should be tested again, before we take it farther afield.

It was indeed a lovely ride, and the bike’s electric booster left me energy over for photography.

A bit of mist in the car-free avenue that is Kalfjeslaan, a great path out of Amsterdam.

First stop by the Amstel River is Ouderkerk (Old Church). The village is mainly interesting for the Jewish-Portuguese cemetery where Baruch Spinoza’s parents are buried.

I liked this little lane by the Waver River.

20 km and an hour or so on the clock, and I reached Abcoude…

…in time for market day.

The path by the Gein River is one of my favourites – flat, beautiful, with two windmills and very few cars.

I’ve taken so many shots of this bridge in Weesp, mostly because there’s a good cafe looking out at it. 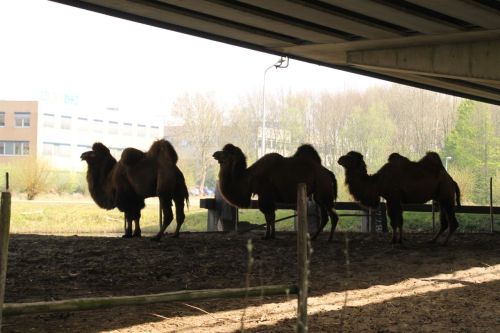 I’m sure there’s a very good reason why camels shelter under a bridge near Naarden. I just can’t think of it right now.

Naarden is a vesting (a fortified village) with a moat and a museum where school kids can look at cannons. They must be a little disappointed if they’re not allowed to shoot them.

Muiden. A place for a final drink by the lock before pointing the bike back at Amsterdam.

There’ll be more Dutch rides to come and I’ll be perfectly satisfied if they’re all as nice as this one. Stay tuned.

And oh, the results of the Dutch ID electric bike test, for those interested. I set the support on ‘ECO, level 1’ for the whole 72km trip. That was enough to give me a noticeable little ‘hand on the back’ when riding into the wind, and I arrived home with the gauge offering me another 33km of boosting at that level – over 100km all up, in other words. Pretty good!

For the detailed map of my route, including false turns, CLICK HERE.

17 responses to “AMSTERDAM TO NAARDEN – a fine spring cycle”