THE GUGGENHEIM IN HOLLAND – Cobra Museum

Karel Appel’s playful sculpture outside the Cobra Museum in Amstelveen.

I feel well disposed towards artists who admit they really don’t understand what they’re doing.

“I just mess around a bit,” said Dutch artist Karel Appel; and it became the most famous thing he ever said in his life.

Appel’s work and that of his 1950s contemporaries from COpenhagen, BRussels and Amsterdam is celebrated in the COBRA Museum in Amstelveen, just outside Amsterdam. The museum’s permanent collection is one of the Netherlands’ greatest treasures.

This year, Appel and his fellow Cobras have been joined in Amstelveen by work from New York’s Guggenheim. Pollack, Rothko, de Koning, Poliakoff and others splashed, dribbled and daubed colour onto canvas, apparently at random, yet by some magical process the effect is wonderful. We thought the exhibition was fabulous, and highly recommend it to anyone who’ll be in Amsterdam over the next few months.

This is the sort of work about which people say, ‘My five-year-old could have done that.’ Is it really a case of The Emperor’s New Clothes syndrome? Do we only take the CoBrAs seriously because they’re hung in a smart gallery next to artists whose paintings sell for millions?

A few years ago Mevrouw T and I attended an Art Amsterdam event, in which dozens of Dutch galleries displayed samples of the work of their artists. We walked around listlessly, muttering darkly about five-year-olds. Then a painting in the distance caught my eye. ‘I don’t know much about art but I know what I like. I like that one.’

I moved closer and I still liked it. A lot. I bent to inspect the price tag: from memory, 120,000 euros. The signature was Karel Appel.

To quote from the Cobra Museum website: “Cobra artists wanted to produce art that could be understood by everyone, that would speak directly to the individual. To achieve this, they sought to get as close as possible to the underlying core of what it meant to be human. They sought ‘authenticity’, and found something closer to that authenticity in the artistic expressions of children, folk culture and in non-Western societies.” 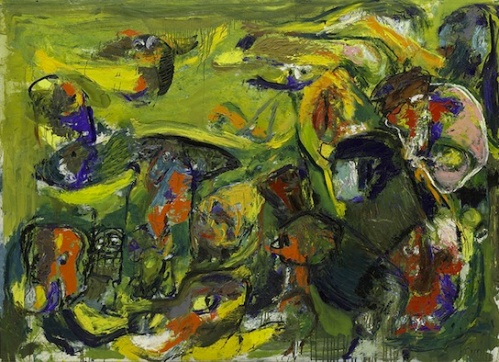 Appel’s colourful work is characterised by the thick layers of paint, daubed on with brush, palette knife, bare hands and sometimes poured on by the potful.

So here’s another quote from Karel Appel that I love: when challenged that his work sold better than those of other Cobra artists in a group exhibition, he answered, ‘But I use more paint too.’

If 120,000 euros is a bit outside your budget you could do as we did and spend a few euros on coffee mugs with designs by Cobra artist Corneille. Our mugs can be understood by everyone and ‘speak directly to the individual’. 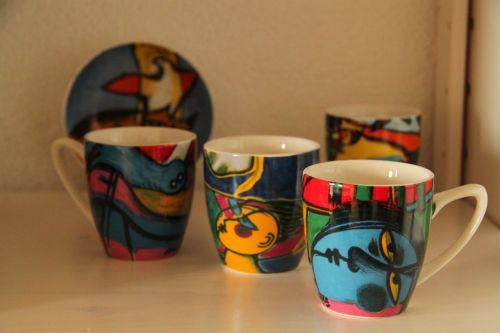 7 responses to “THE GUGGENHEIM IN HOLLAND – Cobra Museum”