HOLLAND BY BIKE AND BARGE 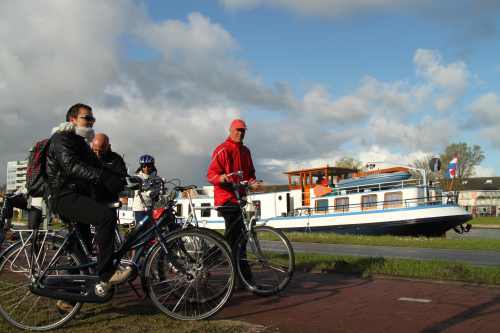 The barge, ‘Holland’, and its intrepid crew getting ready for a great day’s riding.

As I’m going to be chained to a desk and a computer for the next few weeks, I’ll take the chance to look back on some of the highlights of the travel year to date.

For forty years, the grimy little barge Germa carried sand around Dutch canals. Then someone decided that carrying tourists would be more fun, and perhaps more lucrative too. So in the 1960s Germa was given a total makeover, with guest cabins built inside and a coat of cheerful paint outside. They changed Germa’s name too, to the more appealing Holland.

Now proud skipper John and cycling guide Marcel lead people on leisurely canal cruises, along the way taking their guests on bikes, to pedal round those Dutch icons – tulips, clogs, windmills and cheese.

‘Don’t bring too much luggage,’ was the pre-boarding warning. ‘Our cabins are small.’ I find that part of the charm. There may be more luxurious boats, but we have bunk beds and ensuite bathrooms and what more do you need? It’s good to be forced out into the comfortable saloon to mingle with our twenty fellow passengers, on this trip German, Italian, Belgian, British and Canadian.

A fine thing about doing this sort of active travel adventure is that you meet other active adventurers.

It’s a family event – our youngest member is seven-year-old Paris, and our oldest…I promised not to tell.

Jackets zipped against the biting wind and cameras at the ready we steam from Amsterdam up the North Sea Canal past the docks and cranes, warehouses and apartments, before ducking into the Spaarn River. John docks at the village of Spaarndam and guides Marcel and Thea unload our bikes. We have a quiet 10-12kms ahead of us to get our backsides acquainted with our saddles as we ride to Haarlem.

The bikes are sturdy sit-up-and-beg Dutch models, built for comfort rather than speed and perfect for those who are wobbly on two wheels. Paris and his older brother Mihir take it all in their stride, causing their parents some anxiety.

But there’s little to worry about. Marcel, tall and gangly, rides in front, setting a gentle pace, for the most part along car-free cycle paths, and at intersections directing us left, right and straight ahead with a wave of his red baseball cap. More confident riders in the party also make sure the kids are safe.

Cycling Dutch style – a line of bikes and not a car to be seen.

We reach Haarlem, our first overnight stop. The Holland is waiting for us there, moored among other barges, Jelmar, Panache and Zwaan, each with rows of bikes on the deck.

Some reward themselves with a beer from the bar, while others take a shower or a stroll. Dinner will be at six. Skipper John is also a ‘hobby cook’, he tells us, meaning he takes a pride in his culinary inventions. It’s decidedly Dutch comfort food; soup, chicken or schnitzel with vegetarian options, just what we need after a few hours cycling.

After dinner, Marcel leads us on a twilight walking tour of Haarlem, to my mind Holland’s most beautiful town. Unfortunately its museums are closed by now, but there is still enough to interest us. The lovely market square and beautiful garden courtyards of the hofjes (accommodation for the poor provided by wealthy philanthropists) are testimony to Haarlem’s former prosperity.

Through the bridge on the River Spaarn, Haarlem.

Haarlem was for centuries larger and wealthier than Amsterdam, thanks to the Protestant immigrants from Belgium who brought the textile and beer trade to town and it’s still one of the more affluent places in the country.

It even has a discreet red light district next to the church. The ladies wave from the upstairs windows – another very Dutch cultural experience. ‘They know me from last week,’ says Marcel, waving back.

Next morning we have a leisurely breakfast as the barge takes us up river, then hop on our bikes for a thirty kilometre ride. This sounds daunting to some, but the day is broken by two hours in the spectacular Keukenhof Gardens, then by photo stops as we ride past the tulip fields. They’re only in bloom during the spring, so the trip is perfectly timed.

Tiptoeing through the tulips. You’re in big trouble if you step on them.

Tired but happy, we meet the barge for dinner in Leiden. It’s a buzzing student town, birthplace of Rembrandt and site of the Netherlands’ first university, established by William of Orange as a reward for Leiden’s brave resistance of the Spanish siege. Marcel knows his history too.

The short night ride to explore the town is optional, so some take the opportunity to give tired legs and tender rear-ends a well-earned rest.

Day Three turns out to be the best, and longest, cycling day of the trip, as we ride into the area known as Holland’s Green Heart. It’s classic Dutch countryside, green polder fields criss-crossed by canals, each with its resident white swans.

Marcel calls a halt at a windmill, where volunteer miller Andries shows us around. This mill dates back to the 1600s, he tells us, though there was a mill here as early as 1430, pumping water out of the canal and sending it towards the nearby Haarlemmer Lake. 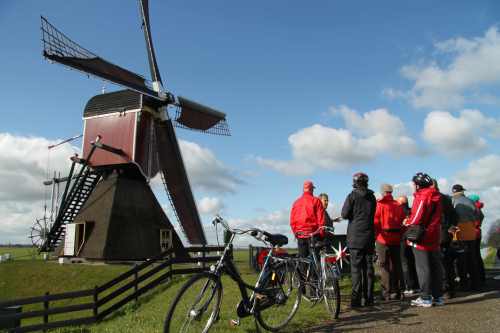 Andries explains the wondrous workings of the windmill.

On our final morning we need to make an early start on the bikes. The flower market at Aalsmeer is the world’s biggest, and much of the action happens at dawn. Though I know Holland well, this is new to me.

Aalsmeer Flower Market claims to be the world’s biggest building (by area).

It is extraordinary. Billions of boxed blooms are being appraised and auctioned to buyers sitting on tiered banks tapping bids into their computer screens. Thousands of cases are shuttled on little trains around what we’re told is the biggest building in the world by the area.

Four and a half thousand people work here and by some mysterious process every one of them seems to know exactly what to do. To visitors watching from the observation deck, it’s an amazing hive of fast-motion activity.

We ride back to the Holland for breakfast, farewells and a final glide through the locks and drawbridges back into Amsterdam.

Paris and Mihir declare it their best holiday ever and many make plans to do it again, or to take a longer barge/bike tour. This has been an excellent degustation Dutch menu. More please!

The writer was the guest of Utracks.

Three Amsterdam attractions are a short walk from the start and end of the barge trip:

Amsterdam’s public library OBA is a world class facility, with a buffet cafe on the top floor giving a great view over the city. Free entry. See oba.nl

BIKING AND BARGING THERE: Utracks 4-day guided Tulip Bike and Barge Tours operate from late April to mid May. Cost: from $650 including accommodation, meals, bikes and Keukenhof and Flower Market entry. See www.utracks.com/utau

17 responses to “HOLLAND BY BIKE AND BARGE”