NAARDEN, NETHERLANDS – a star fort in a star location 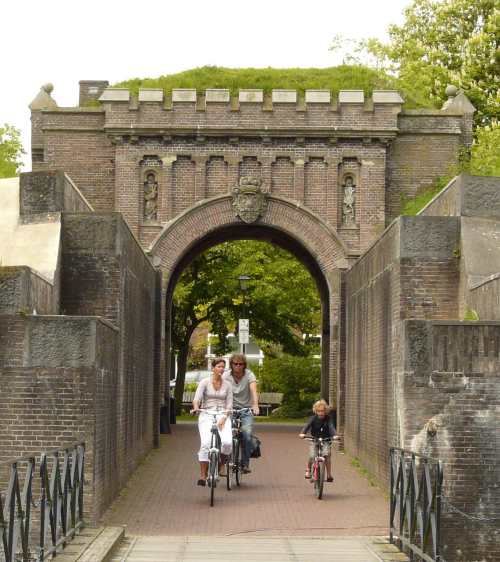 For reasons I will probably never understand, there was a sudden rush to search this blog yesterday for information on Naarden, the small fortified Dutch town east of Amsterdam. I can only guess that Year Six were set an assignment on Naarden and were hoping I would do their homework for them.

I referred to Naarden briefly in a post on the Dutch Cycle Network, because it’s a village I regularly ride past, and I’ve occasionally stopped to refuel with koffie and appeltaart there.

Those who visited RT’s LOTR wanting serious information on the place would have been disappointed, so if you’ve got an extension on your homework deadline and still would like my expert help, here it is…

Naarden is an excellent example of a Spanish ‘star fort’, a walled town with vantage points shaped like arrow heads sticking out into a moat. It’s hard to take a single photo to show how they all fit together unless you have access to a helicopter. Or Google Earth:

Most other fortified villages in the Netherlands have now been swallowed up by the growth of the towns around them, their moats have been drained and only a few oddly-angled streets remain. Naarden has been restored, and boat tours of the moat and visits to its museum are popular with tourists and school groups.

Naarden was one of the largest cities in the Netherlands in the heady days of 1131, and was the capital city of Holland when Amsterdam was nothing but a few fishermen’s hovels along the banks of the River Amstel.

The old stadhuis (town hall) with its characteristic step gables is a popular wedding venue, while in the Waalse Chapel in the Kloosterstraat lies whatever remains of the Czech philosopher and theologian Jan Amos Comenius (1592-1670). His most famous book, Orbis Sensualium Pictus (don’t worry, I’d never heard of it either until I googled it) was written in Naarden.

Comenius was a great believer in a united Europe, and his ideas eventually gave rise to the current charter of the United Nations.

I hope all this helps, dear students of Dutch history and geography. Don’t forget to mention this blog in the bibliography at the bottom of your assignments. And put my information into your own words. Cutting and pasting is called ‘plagiarism’ and you’re not supposed to do it.

Hope you all get A+.

14 responses to “NAARDEN, NETHERLANDS – a star fort in a star location”