March 21st is officially the first day of spring. To celebrate the occasion, the sun made a brief, tentative appearance, causing Amsterdammers to throw off their coats, jump on the bike or the joggers and hurry to the Vondelpark, the largest patch of green in Amsterdam, vowing ‘this year I really am going to get fit’…but first let’s have a coffee and a beer in the sun.

The park is long and thin – a couple of kilometers long and only about three hundred metres across. It’s also car free, crisscrossed by walking paths and cycle tracks, weaving between the lakes, sculptures, formal gardens and cafes. 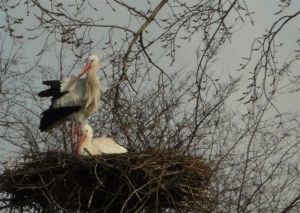 Joost van den Vondel was a 17th century Dutch poet. His poems are remembered by few these days, but his statue still stands in the centre of the park. And you can google his poetry: “Amstelredam, die ‘t hooft verheft aan ‘s hemels as, en schiet, op Plutoos borst, haer wortels door ‘t moerasch.” (Amsterdam, who raises her head to Heaven’s axis, And shoots, on Pluto’s breast, her roots through the swamp). Sorry if that’s not an accurate translation, but it’s my best guess. 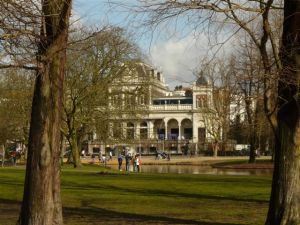 When I first came to Amsterdam in the 1970s, the Vondelpark was the domain of the backpackers, many of whom spent the night camping here, trading travellers’ tales, mind-altering substances and bodily fluids. I went there in daylight hours for the music sessions, dominated by the Turkish drummer who knew only one rhythm. I took my yellow fiddle and jammed along with the guitars and harmonicas of other wannabe Bob Dylans.

The Rose Garden was a notorious gay beat, where people strolled around with colour-coded handkerchiefs hanging from their back pockets. Which handkerchief you displayed and which pocket you dangled it from gave other strollers the clue to the sort of adventure you were up for…so I found out later.

The park has become more regulated since those happy hippie days. Bossy signs now ban camping (of the tent variety) in the park. Sunbathing is allowed, but nudity is not. Live acoustic music is encouraged, but quite rightly Turkish drums are now banned.

Some local residents and concerned park users questioned why sex in the bushes by the children’s playground is apparently still okay, while walking a dog without a leash is not. Writer Youp van ‘t Hek argued in the local Amsterdam newspaper that the lawmakers had got it right this time. He and his wife had always enjoyed sex in the Vondelpark bushes. The children’s play equipment was convenient for hanging up their clothes, but such harmless fun should not be interrupted by a wet doggy nose.

Despite the attempted crackdowns on fun, I have a personal reason to like the Vondelpark. I met my wife here, on a sunny spring day in 1976. Perhaps she liked the colour of my handkerchief (it certainly wasn’t the quality of my fiddle playing) and we took it from there.