A NIGHT AT THE OPERA HOUSE 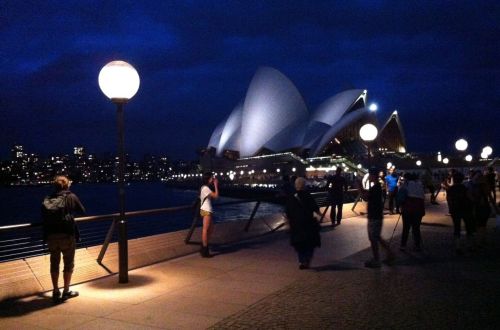 Simply approaching it makes you feel something magic is about to happen.

Mevrouw T and I don’t do this often enough. A thoughtful Christmas present was two tickets to a Sydney Symphony Orchestra concert.

A rare trip to the iconic Sydney Opera House at night reminded us what a special building it is, and what a spectacular location it enjoys. END_OF_DOCUMENT_TOKEN_TO_BE_REPLACED

SYDNEY WALK DAY 9 – back under the Harbour Bridge 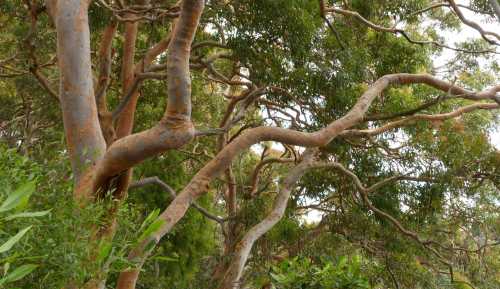 Sydney Red Gums (Angophora costata) - could be the world's most beautiful trees.

A really good little walk today, with lots of features of interest and a few surprises.

Again I took the bike, because I expected to have to skirt around through suburban streets and I wanted to get that part of it over with quickly. Some Greenwich residents get nice views across the Shell Oil Terminal to the Harbour Bridge, but I’d already seen enough bridge views from Longueville.

The surprise came when I rode down a steep hill into Berry Island Reserve, named after a certain Alexander Berry. He also lent his name to the southern NSW town Berry and they never returned it. END_OF_DOCUMENT_TOKEN_TO_BE_REPLACED 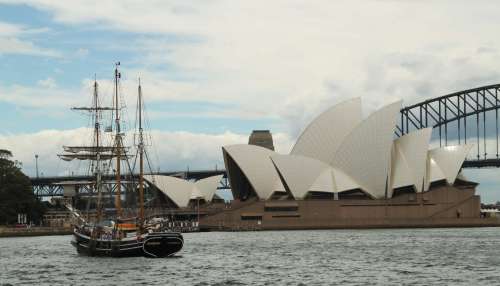 It would be unreasonable to expect the whole walk to look quite like this.

There are only three Australian landmarks that people around the world recognise even if they’ve never seen them live, up close and personal. I passed two of them on my walk today. The third one is Uluru (formerly ‘Ayers Rock’). END_OF_DOCUMENT_TOKEN_TO_BE_REPLACED 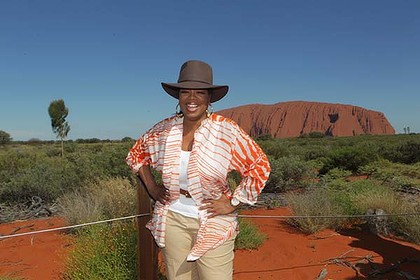 Welcome to Australia. We don’t have enough American celebrity talk-show hosts visiting us, wearing Akubra cowboy hats, cuddling koalas and Aboriginal kids and telling us how they love coming Downunder because everybody is so natural and friendly. I understand we Aussie taxpayers have invested about $1,500,000.00 to get you here, so we’re naturally very excited to see what our money has bought. Please excuse us if we gush a bit.

I was at first a little disappointed not to be included on the interviewee list for your shows in the Opera House, but I consoled myself by remembering that Nicole Kidman needs the publicity more than I do. I can always talk about myself on this blog. END_OF_DOCUMENT_TOKEN_TO_BE_REPLACED 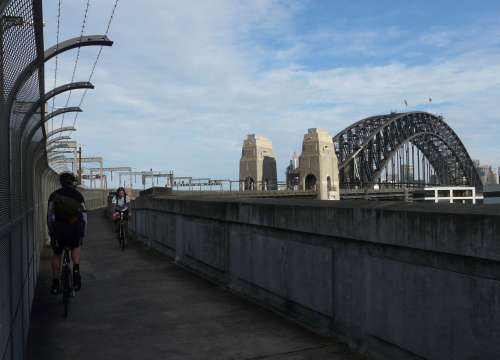 Sydney has a new plan for spending millions of dollars on new bike lanes and infrastructure, and it has met predictable opposition from motorists and radio shock jocks. The usual arguments fly round: “This is not the solution to Sydney’s traffic congestion” (No it’s not, but it’s part of the solution; every car off the road helps a bit), “It takes away parking spaces” (Very few, and every bike means one less car needing parking’), “Sydney is too big, hot and hilly – we’re not Amsterdam” (No, and Amsterdam is cold, wet and crowded, so bikes could never work there)…

I ride the bike every day when living in Amsterdam, for commuting and for fun. So I tried to imagine whether cycling in Sydney could ever take off as a tourist activity. There are a couple of companies offering guided small group cycling tours. I haven’t road-tested them, so I can’t recommend (or condemn) them, but could Sydney ever offset expenditure on its cycling infrastructure by attracting more cycling tourists?

I tested a route from inner west Petersham, into the city centre, then across the iconic Sydney Harbour Bridge, to see what Sydney had to offer. I was pleasantly surprised.

Here’s the route in pictures… 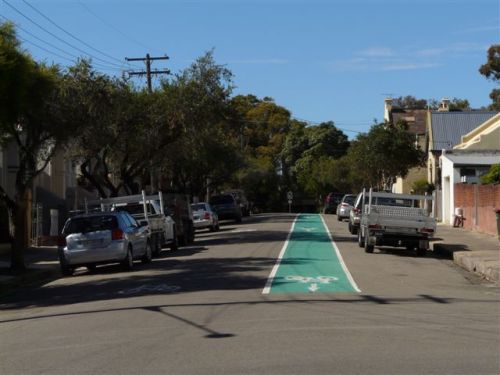 Leichhardt Council's been spending some money on green paint and splashing it around Annandale. That's a good start, though there are still too many places where the green just stops. But the roads are quiet and leafy, and there are nice houses and parks to visit. 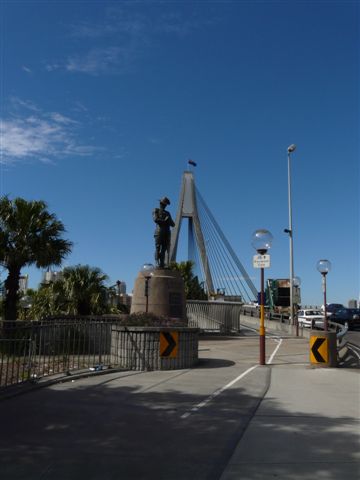 The digger wished me luck on the Anzac Bridge, but it's a good car-free cycleway and I didn't need it. The view from the middle is exhilarating and only the ramps at the ends are tricky. 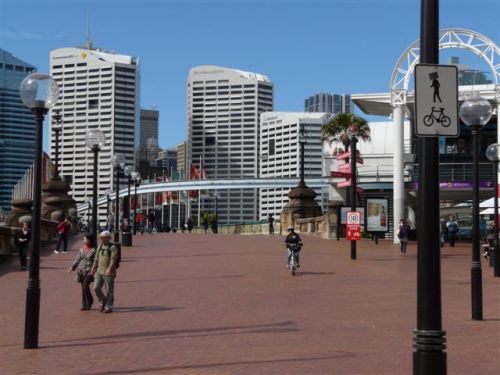 A simple green designated cycle lane across Darling Harbour would make this bridge much safer for pedestrians and less frustrating for cyclists. As it stands, cyclists have to weave between them. But it's good that we're allowed there at all, and there's plenty to keep tourists happy here - shopping, cafes, aquarium etc. 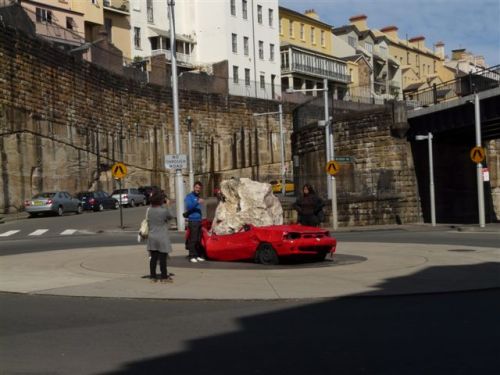 Rumour has it that this art work in Hickson's Bay Rd was designed by a cyclist. 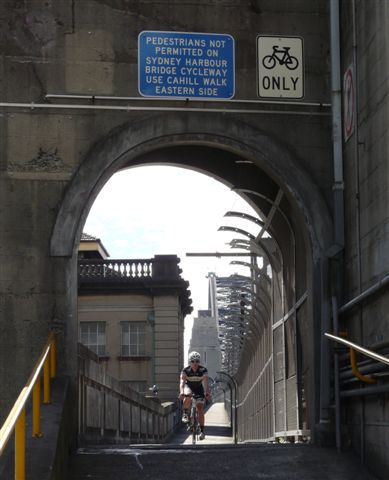 After a few false turns in the historic Rocks area, I found my way to the Harbour Bridge cycleway - note the signs banning pedestrians! 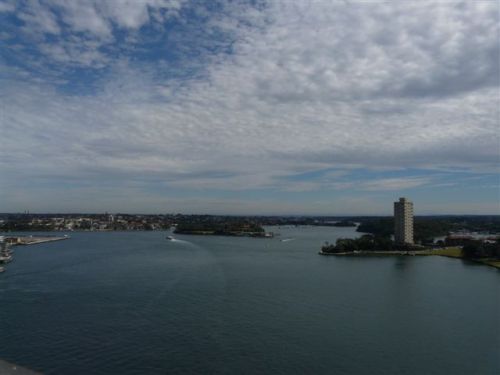 People pay big bucks to the Bridge Climb company to get this view. It's free from a bike - and still brilliant! 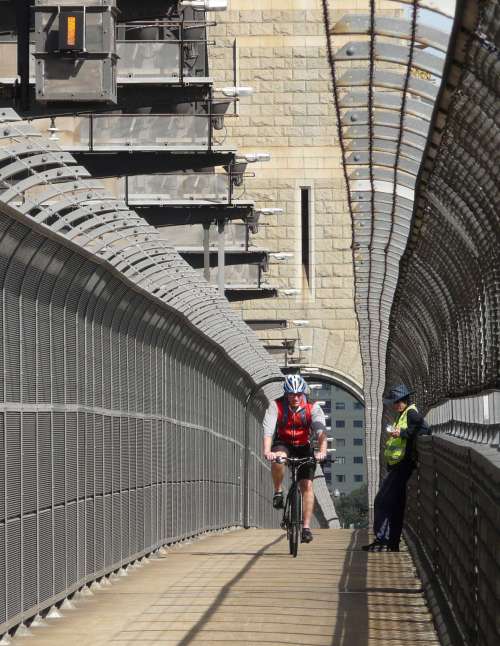 Security guards keep the joggers off the path. 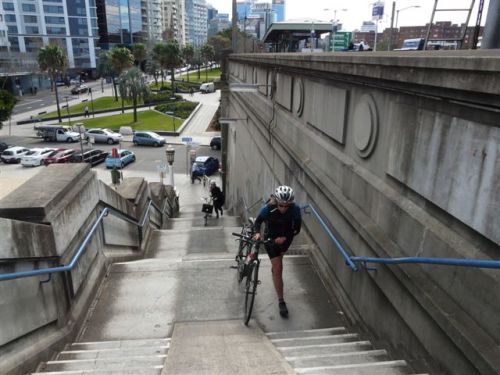 Shame about the steps at the Milson's Point end - a ramp would be good, though I'm told the serious MTB boys and girls like the challenge of riding the steps. 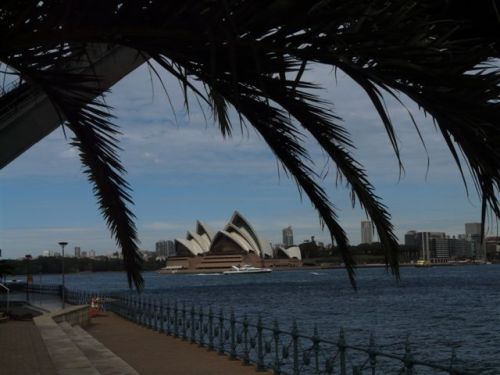 The view from the Milson's Point side makes you think Sydney's not a bad city at all. 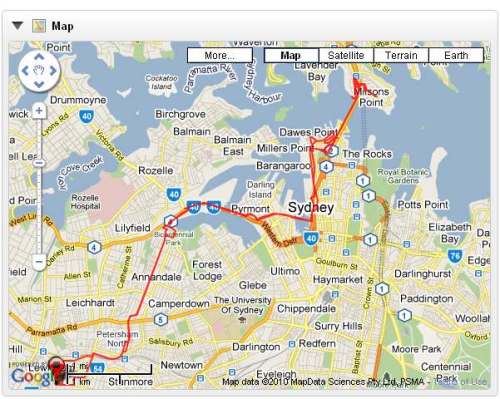 This is not a route for getting up great speed, and there are often frustrating waits at intersections where the cycle path stops and you share a footpath with pedestrians. However it is generally very safe, and certainly spectacular. More tourists should try it!

At Milson’s Point I met a couple of Sydney riders who had taken a week’s holiday just to go bike riding in their own city. ‘The bikes have been gathering dust in the shed,’ they told me, ‘and this is a cheap holiday.’ And how has it been? I asked. ‘Best holiday we’ve had in ages!’ was their verdict.

It was about a 26.68km round trip, including a few false turns and a bit of backtracking as I searched for photo opportunites. To see my route in detail, click here.