WALKING WITH KIWIS – a week on the Shaky Isles

My final adventure for this trip was just outside Auckland in the Waitakere Ranges. Only a half hour drive out of town – spectacular forest with some mighty kauri trees, nikau palms, plenty of birds and beautiful black sand beaches including Karekare, the beach featured in Jane Campion’s film The Piano. 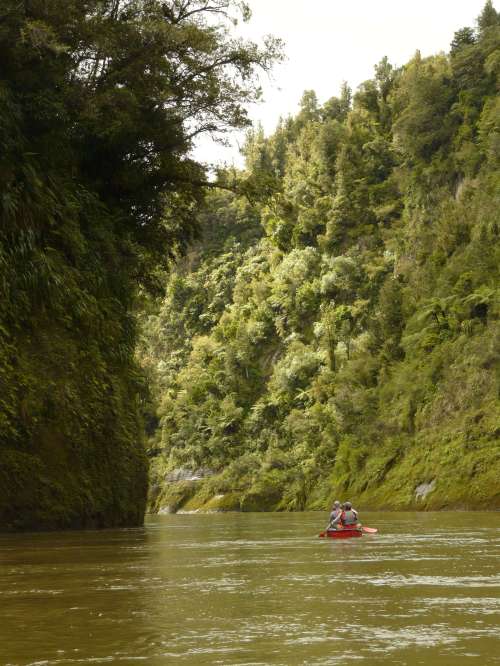 Saturday 5/12/09 – Monday 7/12/09
What a truly brilliant excursion is the three-day canoe trip down the Whanganui River! “Chuck an empty canoe in the river here and it will make it to the finish”, said our guide Dave. “It’s just the people in it that complicate things.” He was right, really. We rookies did our best to paddle in straight lines, but most of the time just relaxing and letting the river take us downstream was enough.

We passed through fabulous forest, gorgeous gorges, gentle water with the odd stretch of rapids to keep us from getting totally complacent. Add to that good company – from Denmark, New Zealand, Scotland, Canada and Australia.

This is the one New Zealand “Great Walk” that everyone can do sitting down.

The weather forecast was bad and the weather itself no better, so the dawn walk up Mt Tongariro was called off. The dawn event would have required getting up at 1.30am to start hiking at a ridiculous 2.30am. So I was happy to sleep in, eat a big breakfast in the Powderhorn Chateau in the ski village Ohakune, then drive out to start the walk in the mist and drizzle around 10am. This meant missing the crowds of backpackers who usually turn the crossing into a parade.

Just six of us formed the party, led by Adrift Outdoors director Stewart and guide Chris. It not an easy walk, though anyone who puts in the effort is going to survive it if they’re careful and well equipped. Stewart made sure that we were.

The view of Mt Ngaruhoe, which starred as Mt Doom in the Lord of the Rings trilogy, was non-existent, and Stewart had to valiantly paint us a word picture of the (normally stunning) Red Crater and Emerald Lakes as we peered into impenetrable mist and driving rain.

To further take the road less travelled, Stewart led us off the main path, up Mt Tongariro, then down “off-track”, picking our way between the rocks to make a 7-hour loop back to our starting point. Weather improved as the day wore on, but this is a great walk in any conditions. 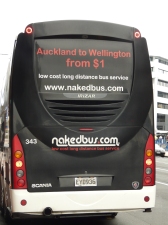 The Naked Bus from Auckland to Rotorua wasn’t quite as exciting as it sounds. Driver Craig remained fully clothed for the entire four hour trip and I for one was pretty pleased about that. He was a big boy for his height.

Rotorua, hotspot of geothermal tourism and centre of Maori culture, was in the middle of a power blackout when I arrived. Toilets in the tourist information office were in pitch darkness. I could only guess that I was doing the right thing in the right place, with sound alone as my guide. Until a gentleman next to me switched on his mobile phone and suddenly there was light.

It was all good practice for tomorrow’s adventure, hiking up Mt Tongariro in the dark (start time 2am) so as to get to the summit for breakfast at dawn. I’ve been sent an equipment checklist which includes many layers of warm clothing and a headlamp, with no mention made of sunscreen and wide-brimmed hats. The rain seems to have cleared for the moment, and the predicted thunderstorms have held off, so maybe the adventure will be on.

New Zealand weather reports could really be the same every day : ‘We don’t have a clue what the weather will be like tomorrow. It will probably rain, but maybe it won’t.’
After Tongariro it’s straight up to the Whanganui River, a wifi-free zone, so probably can’t post news till Monday. But stay tuned…

Here I am, the Grim Reaper of Auckland, or maybe one of those Star Wars guys, in New Zealand for a week or so, with a series of death-defying experiences planned, highlights of which should be (1) Hiking up volcanic Mt Tongariro, starting in the dark at some ridiculous hour, so as to be on the summit for dawn (2) Canoeing down the reputedly lovely Whanganui River (3) active adventures, details to be confirmed, which can be done as a day excursion from Auckland.

Weather forecast: Same as today – wet and dismal, as is typical for this little country which unwisely sticks its mountains up into unbroken westerly winds, tickling the tummy of every passing cloud and causing it to wet itself. If it turns really nasty, some of the above activities may be cancelled and we’ll have to play inside instead.

However, to start with some good news…

I found what seemed to be a good deal on a flight, picking up the tail end of an Emirates flight from Dubai to Auckland via Sydney. AUD420 including taxes – not bad.

To that I added a bus fare (NZD35 – ‘cheap as chups’) to my first destination, Rotorua. Air New Zealand must have hacked into my online activity, because no sooner had I committed to Emirates plus bus than Air NZ announced a direct Sydney-Rotorua flight for AUD199. As the Kiwis would say – “Bugger!”

However, EK412 turned out to be a near empty Airbus380. I had three seats at the back of economy, with good leg room, power supply for the laptop, acceptable omelette and fruit salad and wide screen TV showing a wide selection of movies. I bet they didn’t screen Azwaj Te’shoun on that direct flight to Rotorua. I watched Julie and Julia instead, but it was nice to know those Arabic movies were there.

More good news: the currency exchange rate.
Normally people can track my movements around the world by following the international currency exchanges. When the Euro skyrockets, it means I’m heading to Europe soon. British pound at record levels? That’s because I’ve just booked London accommodation and haven’t paid for it yet. Any rise in the value of the Aussie dollar means I’m not going anywhere anytime soon.

But this time I’ve had a win. The poor little Kiwi dollar hasn’t fared too well during the GFC, while the Australia has enjoyed an economic miracle (being the first country after the meltdown to raise interest rates and all that) So at time of writing the Kiwi dollar is hovering around 80 Australian cents.

I’d read about controversy over the Whitcoulls’ Santa, who’s graced the corner of his Auckland city building every Yuletide since 19…, well he’d been there a long time and become an institution. This year he’s been given a new face, because the one he’s worn all those years was considered a bit creepy. Here’s the new one. You be the judge, but it’s a worry if the old one was creepier than this.

More tomorrow, when I’ll be riding the curiously named ‘Naked Bus’ to Rotorua. Note to self: keep camera handy, you never know.