Tag Archives: Lord of the Rings

‘This Red Crater is a spectacular volcanic gash, deep red like your rain jacket, with soil as black as…that beanie. The Emerald Lakes below us are an amazing blue-green, um, like Chris’s eyes.’ Our guide Stewart is painting us a word picture of the highlights of New Zealand’s Tongariro National Park. He has to. We’re perched on the edge of a chasm beyond which the world seems to end. There is no view, only thick mist, with a fierce wind driving freezing rain horizontally into our faces.

Tongariro, in the middle of the North Island, was the location chosen by Lord of the Rings director Peter Jackson to represent Mordor, which you may remember as a very bad place, the Dark Lord Sauron’s HQ. Its volcano Mt Ngauruhoe became the sinister Mt Doom. The terrain is harsh and unforgiving, the weather unreliable, but the scenery is quite literally fantastic.

The Kiwis advertise the famous Tongariro Crossing, the hike across the park’s northern end as the greatest one-day tramp in New Zealand, if not the world. So it’s popular. Any fine summer’s day the crowds of backpackers erupt out of shuttle buses with names like Volcanic Adventures to swarm over the track.

But we won’t see many of them today. I’m with a tour group guided by Stewart and Chris from Adrift Outdoors, who have devised cunning ways of seeing the best of the area while avoiding the crowds. Stewart guides walks starting in the dark to catch the sunrise, winter expeditions with crampons and ice-axes, as well as today’s planned adventure, an ‘off track’ loop taking us to the summit of Mt Tongariro itself, and across a part of the park where few people go.

There are just six of us in our party – outdoor enthusiasts Asa and Lennart from Sweden, fresh from climbing Mt Kilimanjaro, Sophie from Ohakune village down the road who has never walked here, our two guides and me. Before we leave, Stewart checks we have adequate clothing and footwear, and lends gear to anyone who didn’t realise that these mountains can suddenly turn very cold indeed.

But at 10am the rain is holding off, so we start walking. We’re in no hurry, and best of all, we’re alone; the backpacker hordes left earlier. The track begins gently, climbing slowly up the Mangatepopo Valley, through button grass and the heather introduced to the area by a misguided Scotsman who hoped to establish a grouse shooting business. Heather is pretty enough in its place, but it has become a noxious weed here.

Setting off - Mr Ngauruhoe in the mist

Through the gathering clouds we can just make out the imposing outlines of the perfect snow-capped cone that is Mt Nguaruhoe towering in front of us and the ragged escarpment of Mt Tongariro on the left.

At Soda Springs, a waterfall at the end of the valley, we pause briefly at the last toilet for 12km. Most of this route is devoid even of convenient trees; that Dark Lord Sauron certainly knows how to cause maximum discomfort.

From here the steep stuff starts, up the Devil’s Staircase between jagged outcrops. The track is well-made and easy to follow, and we can catch our breath as Stewart and Chris point out geological features, including some uncomfortably recent lava flows. Ngauruhoe is an active volcano, ten years overdue for an eruption, but with luck today won’t be the day.

The mist closes in as we emerge on the South Crater, but we can see enough of this extraordinary moonscape; a broad, flat desert, dotted with loose rocks. The further we go, the weirder the landscape becomes. Slipping and sliding on the scoria we scramble up to the lip of the Red Crater. Legs and lungs are feeling it now.

After Stewart’s valiant word-picture description of the invisible crater (‘you should have been here last week’) we branch off the main track and head toward the summit of Mt Tongariro. As we do, the rain stops, the wind dies and the mist lifts, allowing tantalising glimpses of Lake Taupo in the distance.

It’s not a hard climb, though we’re now a creditable 800metres above our starting point. As we bump down off the summit and pick our way across open ground, between rocks and tussock grass, the sky suddenly clears, giving us spectacular views across to Mt Ngauruhoe and snow-capped Mt Ruapehu. 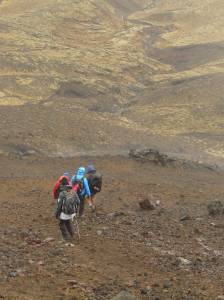 After six hours of walking, my creaky legs take a battering on the short steep descent back to the Mangatepopo Stream, but Stewart has a beer waiting for us at the car park and any pain is soon forgotten.

So is it the greatest one-day walk in the world? If you want a moderate physical challenge, extraordinarily varied scenery and spectacular volcanic terrain, I certainly can’t think of a better one. Never mind that we missed some views today – the weather conditions added a touch of magic, and made us all the more appreciative when they improved.

The Swedes enthusiastically declare it ‘the best day we’ve had in New Zealand’. Sophie (‘I’m not a walker’) intends to do it again some time. So do I.

The writer was a guest of Visit Ruapehu.

Getting there: In summer months, trains run daily from Auckland to National Park and Okahune for NZD99. Many shuttle bus services are available to the ends of the track.

Staying there: The Powderhorn Chateau in Okahune has rooms from NZD195.

November to May is the normal tramping season. In winter the walk is for experienced, well-equipped alpinists only. At any time, a reasonable level of fitness is needed to enjoy the walk rather than just endure it.

For other activities and accommodation, see www.visitruapehu.co.nz