John and Yoko famously spent their honeymoon in bed in Amsterdam’s Hilton Hotel on the Apollolaan. If Artzuid had been on at the time, it may have drawn them down to the street.


This biennial art event (well, the first one was two years ago) is on its way to becoming a major Amsterdam institution. We hope it will get there. END_OF_DOCUMENT_TOKEN_TO_BE_REPLACED

It’s inspiring for a humble hack to read the polished work of great writers.

But it can also be intimidating, so I also enjoy seeing how geniuses sometimes struggle.

I love reading their rough drafts, spotting the false starts, the wrong turns, the indecision and the writer’s block, as well as the flashes of brilliance. They are on display, warts and all, in the British Library.

There are over 150 million items in the library, including what must surely be the world’s greatest collection of manuscripts from the most illustrious scribes and composers of all time. Jane Austen, Thomas Hardy, Mozart, Beethoven, Lennon and McCartney are all there, waiting for us to enjoy their little mistakes and eccentricities.

In 1998, after years of delay and budget overruns, the library moved into smart new premises, with the towers of St Pancras Station peering over its roof. Eduardo Paolozzi’s large statue ‘Newton: after William Blake’, squats in the forecourt, playing with geometric dividers. 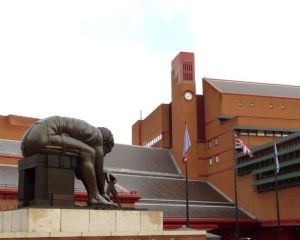 There’s a queue forming well before the opening time, so we hop across for a coffee at the Last Word Café, as a mixed bunch – students, bearded academic-looking types, and a few tourists – line up at the doors. Many have their noses buried in books.

At 9.30 the doors open and in we go. Shakespeare’s statue looks down to welcome us and information boards advertise exhibitions on Darwin and ‘The Sound and the

Fury’, archival recordings of great and memorable speeches. We listen to Winston Churchill promising to fight on the beaches, Martin Luther King having a dream, and Gwyneth Paltrow tearfully thanking the world for her Oscar. 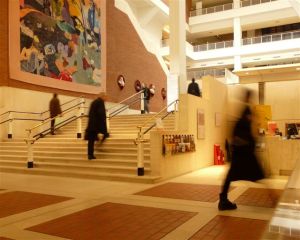 Inside it was all a bit of blur…

But we’ve really come here for the Sir John Ritblat Gallery. In the glass cases under dim light, we pore over the illuminated manuscripts of the Lindisfarne Gospels, ancient religious texts from the Indian and Arab world, and copies of the Gutenberg Bible of 1450, the first book to be printed in England.

Star attraction of the collection is a parchment copy of the Magna Carta. It rates a special alcove all to itself, though I confess I don’t entirely understand its significance. I know it was a breakthrough when King John, under duress from the barons, acknowledged that the monarch, like his people, was subject to the law, but I believe he repudiated the document soon after.

More accessible and appealing to me are the handwritten drafts by writers and composers I know and love. Jane Austen was already writing very well as a teenager. A story written for her sister is displayed next to her draft of ‘Persuasion’. I’m encouraged to see that she edited far more as she grew older, losing the certainty of youth.

Other great works also began life as stop/start affairs. Thomas Hardy wrote ‘The Daughter of the d’Urbervilles’ in his notebook, then deleted his first two words and inserted ‘Tess’. William Wordsworth and Joseph Conrad had plenty of second thoughts. Playwright Harold Pinter apparently got bored with typing ‘pause’. Pinteresque pauses turned up so frequently that he just typed ‘p’ between his speeches; then amended them with litres of red ink.

There are Leonardo da Vinci’s notebooks, letters from Florence Nightingale, Newton and Charles Darwin, and Captain Soame Jenyns’ eyewitness account of the charge of the Light Brigade. The logbook of Nelson’s flagship, Victory, is next to one of Captain James Cook’s journals, (Cook also scrubbed out many lines he was unhappy with).

For heart-wrenching stuff, nothing beats Captain Scott’s diary from his fatal Antarctic expedition. It lies open at the poignant final page, ending, ‘For God’s sake, take care of our people.’

Douglas Haig wrote an inspiring call to arms to his troops in his Special Order of the Day in April 1918. He first included the sentence, ‘But be of good cheer, the British Empire must win in the end.’ Then he crossed that out. Too hollow perhaps, in view of the carnage, or was he having doubts about the outcome?

Opposite the writers’ displays are the original scores of famous composers. Even Mozart, I’m pleased to report, occasionally blotted his copybook, and Beethoven was a particularly messy worker. His violin sonata has phrases cross-hatched out violently, as if Ludwig was determined to ensure that nobody should ever see what stupid ideas he’d considered.

A group of French students cluster round the glass case dedicated to Beatles drafts. There are the lyrics of Michelle, penned by Paul McCartney on an envelope. A Hard Day’s Night is scrawled on the back of John Lennon’s birthday card for his son Julian.

My favourite is the sheet of paper with the words to ‘I Want To Hold Your Hand.’
Although it went on to be their breakthrough single in America, it seems that Paul was initially not confident that he and John had just written a hit. At the bottom of the page he’s scrawled a mock teacher’s note – ‘3/10. See me’.

I love Edward Elgar’s efforts. After two lines of music, he begins to doodle a series of comic faces on the staff, and interposes a line… ‘Waiting for 3rd symphony’. That’s what I like to see – someone getting really stuck and chucking it in.

Braced by the knowledge that great artists are also human beings, I risk humiliation by typing my own name into the library’s catalogue. Out of 150 million items, is it asking too much for them to have just one of my books there? They have seven. Phew! Hey, maybe they’d like to display my ancient floppy discs?

Getting there: The British Library is opposite St Pancras underground station.

Staying there: Numerous London accommodation options are on wotif.com/hotels/united-kingdom-london-hotels

Further information: Entry to the British Library is free. More information about the permanent collection and special exhibitions is on the website bl.co.uk