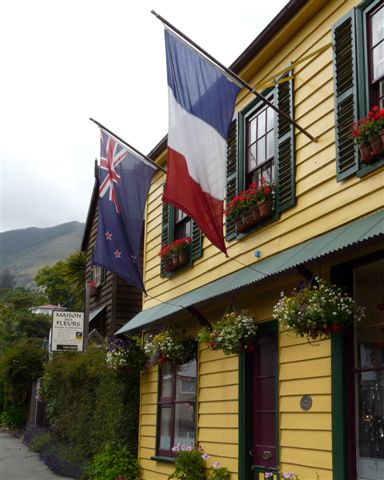 I’m not in France, Belgium or Quebec. This is Akaroa, a village 80km south of Christchurch, on the Banks Peninsula or, as it proudly calls itself, “the Riviera of Canterbury”.

But for a small historical accident, the whole of New Zealand’s South Island could have been dotted with French towns, and this part of the country is playing up its French-ness for all it’s worth. Mon Dieu! They’ve even bussed in a party of British tourists to make the place seem authentically continental.

The Banks Peninsula has plenty of other things going for it before it starts beating the tambour francais (French drum). It’s geographically spectacular for a start. Ancient volcanic explosions left a major crater that is now lovely Akaroa Harbour, and lava flows formed steep spurs down to beautiful secluded bays all around the edges. 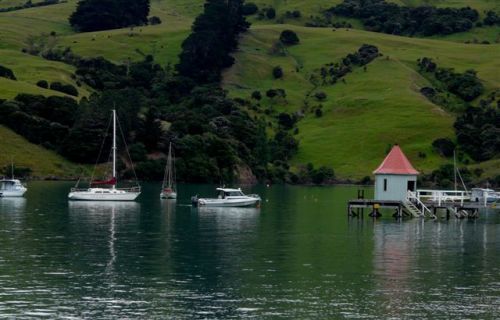 Fishing trawlers and pleasure craft bob in the sage green water of French Bay, the rolling hills form a pleasant backdrop and the rocky cliffs on the eastern shore add some drama.

It’s quiet enough in the off-season, but it must really boom in the summer holidays. Attractive yachts offer the ‘Sail Akaroa Experience’. Tours take visitors out of the bay to fish or to swim with Hector’s dolphins, the smallest and rarest variety of that creature.

The information office provided me with a self-guided audio tour of the town. La Marseillaise (what else?) introduced each stop. I promenaded along the foreshore, admiring the almost-too-cute-to-be-true wooden houses and churches, and listening to the town’s story.

Captain James Cook, normally so meticulous with his mapping, had an off day here in 1769. He failed to circumnavigate what he mistook for an island, quickly named it after Sir Joseph Banks, and sailed on to Botany Bay.

There followed a tragic period of exterminations as first the seals, then the whales, the trees and finally the local Maori were ruthlessly exploited. In 1838, French whaling captain Jean Langlois ‘bought’ the peninsula from Maori people. It may seem surprising that they wanted to offload prime real estate with sweeping water views, presumably in return for axes and muskets, but probably they and M. Langlois had different concepts of what land sale meant.

Langlois returned to France to bring back 63 settlers to colonise his new beachfront property. The British were having none of that so they sent a warship to nip into Akaroa, raise the flag and claim the land for England. A hastily assembled court ruled that nobody but the British crown was allowed to rip off indigenous people, so Langlois was effectively gazumped.

The French, no doubt bitterly disappointed, nevertheless gave Gallic shrugs, struggled ashore and formed their colony under British law. Visitors these days can be very pleased about that.

If the standard of local cuisine took any dip after the British invasion, it’s back with a vengeance now. Little Akaroa has more cafes and restaurants per head of population than anywhere else in the country and prides itself on its gastronomy. C’est la Vie cafe had such an excellent reputation that I couldn’t get in, but there were plenty of alternatives.

On the terrace outside l’Hotel, my young waiter’s t-shirt wished me ‘Bon appetit’, but he didn’t seem very French. Not surly or superior enough perhaps, and when I ordered a flounder fresh from the Akaroa Harbour, he replied with a cheery ‘Sweet as. Inny problems, just guv us a yill.’ There were no problems. The flounder was ‘tres bon’ (very good), and the glass of local ‘chardonnay’ (chardonnay) even better.

Next day I took a drive over the spectacular summit road to the bays on the other side – it wasn’t always easy going. The sign warned that the road was unsuitable for towing or campervans. Would my ageing rental car cope? It strained to reach 25kph and my knuckles turned white on the steering wheel as I negotiated a narrow bumpy road with few safety barriers and disconcerting drops below me.

Little remains of the forest that formerly covered the peninsula, but there was still plenty of nature to enjoy. There were rocky outcrops on every peak, and vistas to the bays below, whenever I dared to flick my eyes off the road to enjoy them. An eagle swooped on a rabbit. Endangered yellowhead birds flitted across my path, but fortunately I was driving so slowly I wasn’t endangering anyone but myself.

Across the water from Akaroa a sign pointed to the French Farm and Winery. It sounded like the perfect spot for an ‘au revoir dejeuner’ (see you later lunch). It looked perfect too, with lavender hedges by a French provincial-style building with heavy wooden doors and vaulted ceilings. The cuisine was of French provincial quality as well. My excellent salmon was caught in the bay and the vegetables locally grown.

As I downed the last drops of my sauvignon blanc, I noticed a family next to me, having a little trouble reading the menu and making themselves understood by the Kiwi waitress.

‘Sacre bleu! (Heavens!)’ I thought, ‘They’re really French! Are they perhaps descendants of Jean Langlois?’ No, they turned out to be tourists, and very happy ones. They admired the décor, they enjoyed the food, and they took a photo of the fromage (cheese) platter.

So how did genuine French people find the Banks Peninsula experience? I asked. ‘Formidable! (Sweet as!)’ they said.