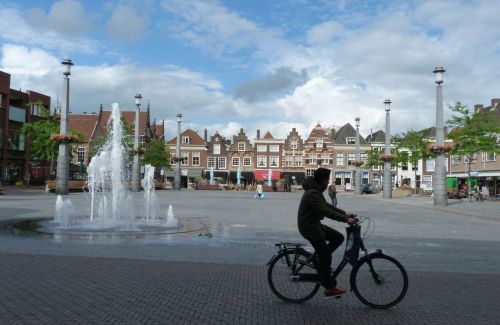 The oldest town in the Netherlands. Not so many people know about it.

‘This landscape always reminds me of Holland,’ said my mother, years ago, somewhere outside Melbourne, on a road between Springvale and Frankston.

She’d never seen Holland and neither had I, but we both knew what she meant. What I only discovered recently was that the image we had of classic Dutch landscape came from 19th century paintings. Even the word ‘landscape’ comes from the Dutch ‘landschap’. END_OF_DOCUMENT_TOKEN_TO_BE_REPLACED 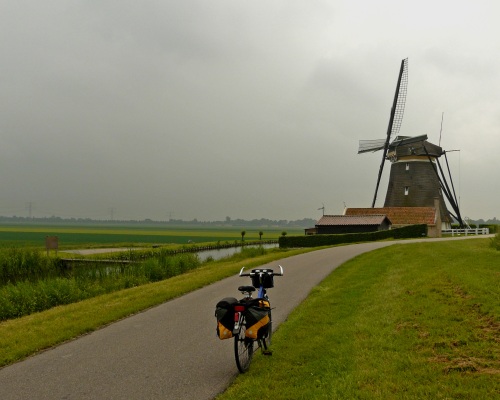 I rode a bike around a bog for five days and enjoyed it. Mind you, we’re talking about a world-class bog here; there can’t be many nicer ones than the Groene Hart (Green Heart) region of the Netherlands.

The Groene Hart, the area directly south of Amsterdam, is the Dutch landscape of the postcards – lush green fields where cows and sheep graze, old windmills turn slowly, ducks dabble on canals and barges glide under willows along the rivers. It’s the largest ‘preserved land’ area in the country; 1500 square miles of farms and nature reserves, dotted with little villages.

Poking up around its edges are the surprisingly interesting cities of Leiden, Rotterdam and Utrecht, so whenever my backside had had enough I could pull off the cycle path and check out a museum. Or I could research a local café, which in this part of the world means ‘bar’.

This was my sort of cycling – flat, safe, and with regular access to food, drink and beds. I hardly needed the gears on my basic touring bike and, even with my unreliable knees, averaging 35miles a day was a breeze, at least when the breeze was behind me.
It was vaguely disconcerting to pedal out of Amsterdam, perched on the dyke beside the Amstel River and notice that the surrounding countryside was several metres below the water level. 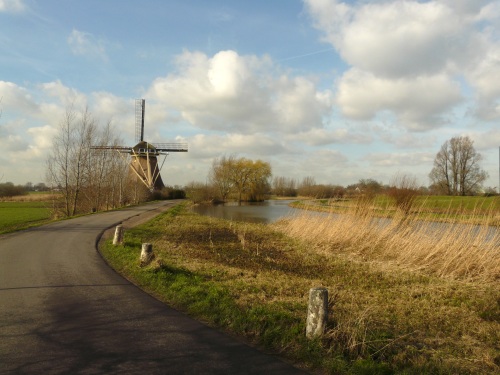 Until the Middle Ages, this was all swamp. Decaying vegetation formed a soggy peat layer several yards thick. So when the growing industries of brewing, weaving and brick-making demanded fuel, there it was in the Groene Hart, just waiting to be dug, dried and burned.

Turf-cutting was relatively lucrative work for mediaeval peasants, but it had a major downside. Drying the land caused subsidence, thus requiring more drainage canals, which in turn led to more drying, more sinking and more flooding, hence the windmills needed to pump the water back up to the rivers.

Now only the dykes are keeping the rivers honest and I hoped I wouldn’t have to stick my finger into one. Incidentally, the author of that classic 19th century tale about the brave little boy who saved the land by putting his finger in a hole was Mary Mapes Dodge, a New Yorker who never saw a Dutch dyke.

Farming here is now barely economical, and environmentally friendly activities are subsidized. So the Groene Hart is becoming an area of lakes and bird sanctuaries, its old farms turned into homes for city commuters, mini-campgrounds and B&Bs. Agriculture’s loss is the cyclist’s gain.

I reached Leiden, famous for cheese studded with cumin seeds. It also boasts the oldest university in the Netherlands, whose most notable alumnus probably dropped out around 1625. He was a young tearaway called R.H. van Rijn, later known just as Rembrandt. The bridges arching over the canal offered an excellent lunch stop.

Then I went rolling down towards Rotterdam, Europe’s busiest harbour. By reputation it’s a no-nonsense commercial centre, devoid of appealing old buildings. On May 14th 1940, as punishment for Dutch resistance, Hitler’s Luftwaffe bombed it flat, killing 800 Rotterdammers. The event is recalled by Ossip Zadkine’s powerful sculpture by the waterfront, The Destroyed City. 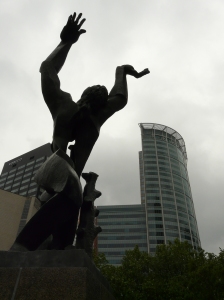 But Rotterdam bounced back. Instead of rebuilding in the old style, the city went for radical modern architecture, and very impressive it is too. 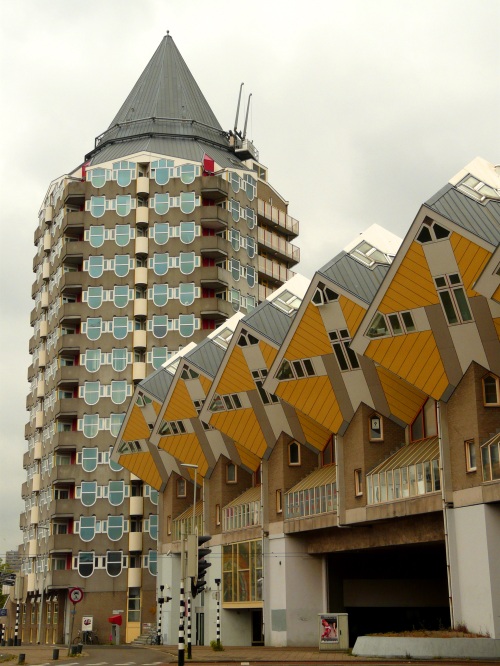 Most extraordinary are Piet Blom’s Cube Houses of 1984. His row of yellow boxes, set on their points, spans a bridge over a busy road. They look award-winning from the outside but could anyone actually live in a house with no vertical walls? One cube is open to the public, so I saw how they ingeniously solved the problem of where to put the bookcases and wardrobes.
Bars by the old Rotterdam harbour were uninviting, but I found one attractive cafe. ‘Can I get good coffee here?’ I asked the waitress. ‘They have better coffee machine next door,’ was the answer. I appreciated the honesty, so I stayed. She was right – the coffee was indeed average, but the food and service were worth tipping.

At the signpost outside the city I had a choice to make. I could fight my way into the gale blowing off Kinderdijk, where World Heritage windmills line a canal, or I could ride with the wind at my back towards Gouda. It started to rain. Suddenly cheese seemed very interesting. 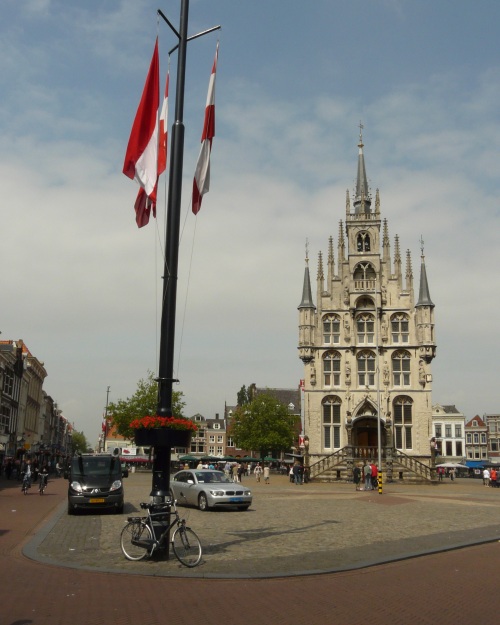 Gouda has perhaps the most beautiful town square in Holland, dominated by a seventeenth century town hall in the middle. A wedding party arrived in a horse-drawn carriage, which sent tourists scrabbling for the cameras. The bride posed for us, then went inside for a very short ceremony – she was married in less time than it took me to eat a cheese sandwich.

30miles further across the Groene Hart I came to Utrecht. It features one of the world’s quirkier museums, with the cumbersome name Het Museum van Speelklok tot Pierement. It’s a museum of mechanical music.

I joined the free tour, as guide Pieter explained the instruments in Dutch and English.
We listened to delicate French musical clocks, pianolas and mighty pierements, the Dutch street organs.

My favourite exhibit was a musical cabbage. When Pieter wound it, tinkly music played, and a fluffy white rabbit emerged to make chewing movements above a cabbage leaf. That was it. Kids were apparently easier to entertain in the pre-Nintendo age, though the young members of tour group enjoyed the bunny too.

Most over-the-top item had to be the grand Heizmann Orchestrion, the 19th century predecessor to the jukebox. It’s a massive structure of polished wood, formerly housed in an expensive café. Insert a coin and you get the sound of a full brass band blaring out. Unfortunately it only ever played one short tune, its internal cylinder being too clumsy and expensive to replace. Not surprisingly, the novelty soon wore off and customers left to find another café, with live music maybe?

Utrecht also claims to have Europe’s only Museum of Aboriginal Art. Kathleen Petyarre of Utopia was the featured artist when I visited and I enjoyed the guide’s thoughtful presentation for a group of Dutch primary school students, who had already been well prepped on Australian Aboriginal culture.

I’d planned to test out a Dutch farmer’s campsite for my final night on the road, so I could report on that experience. I really did mean to do it. My tent and sleeping bag were rolled up in the bike’s panniers.

But the rain was still around, so instead I tested two beers (both good), a Turkish meal (excellent) and put the bike on the train to Amsterdam (easy). From my second-class seat (padded, comfortable) I had a final view of Holland’s Groene Hart sinking in the twilight (very beautiful!)

Bicycles can be hired at most Dutch railway stations for around EUR8-10 a day. A day pass to take the bike on the train outside peak hours costs EUR6.

Entry to the Museum of Aboriginal Art costs EUR8.

Tip: A museumkaart (museum card) costs EUR40 and gives free entry to most Dutch museums. It can be bought in the museums mentioned, as well as many others, and is valid for a year. Visit over five museums and you’ll be ahead.

Guidebook: Fietsen rond het Groene Hart (Cycling round the Green Heart) is in Dutch, but with self-explanatory maps and a useful campground list. It is available at tourist information offices.