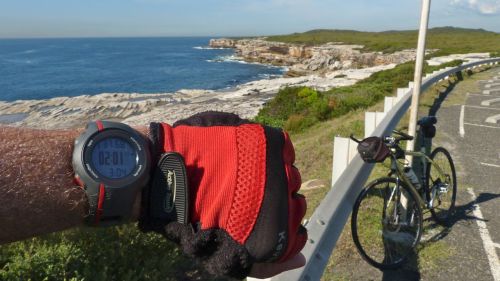 My son thoughtfully gave me a heart rate monitor for my last birthday.

I was touched that he was concerned about his old dad’s ticker, but wait, there’s more… In the package with the heart monitor was a Garmin Forerunner 110, a GPS device designed for runners. It was a generous present, which I’ve been putting to good use, hoping to keep my heart going for several more birthdays at least.

The Forerunner 110 is really intended to adorn the wrists of athletes who care about their personal bests, their lap times and indeed, their heart rates. I’ve been trying it out on my cycling expeditions, on most of which I’ve left the heart monitor at home. END_OF_DOCUMENT_TOKEN_TO_BE_REPLACED 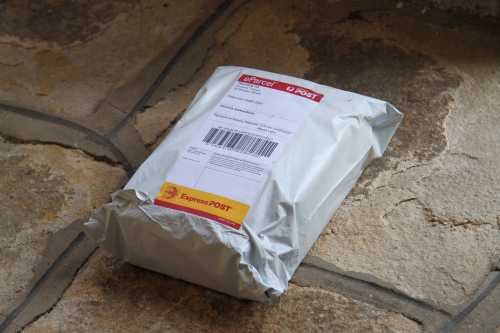 It's arrived, and I'm excited!

A package arrived on the doorstep. My pulse rate probably quickened, but I had no way of checking this. The heart monitor was in that package, along with a new Garmin Edge 800 GPS satellite-guided navigation bicycle computer. I’d been invited to take it on a test drive.

I should explain that I’m not a techy-geeky-dudey-type guy. I know how to insert a DVD into my machine, but getting it to play…that’s what you have kids for. So maybe I’m not the ideal person to be reviewing a wham-bang, state-of-the-art Garmin Edge 800 GPS bike computer. On the other hand, if I can work it, so can everybody else. 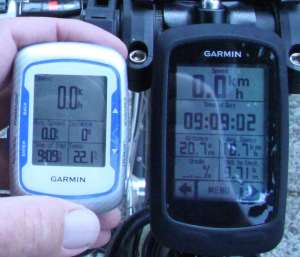 I’ve been riding bikes since before the launch of Sputnik. I know the way along my favourite cycling routes in Sydney and Amsterdam, and the Dutch ones have signposts giving the distance to the next town. I even know a clever trick for calculating average speed; I divide the distance travelled by the number of hours I’ve been riding. I learned to do this back when calculators filled large rooms in bank offices.

Nonetheless, I was excited by my new Garmy’s arrival, because GPS thingies are fun. END_OF_DOCUMENT_TOKEN_TO_BE_REPLACED

GARMIN 500 GPS – does it work in the Himalayas? 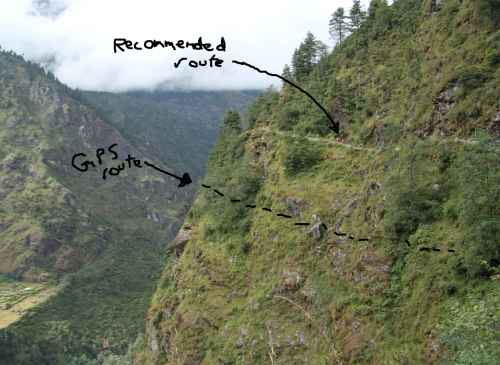 Navigation in the Himalayas is not difficult, at least, not when following the ‘Everest Highway’ in peak trekking season. Just follow the yaks, the guides, the porters and the Germans and you’ll be fine. It’s not a road you’d want to divert from anyway. A step or two off the beaten track could leave you several hundred metres lower in a matter of seconds. END_OF_DOCUMENT_TOKEN_TO_BE_REPLACED

CYCLING SYDNEY – to Ku-Ring-Gai and Kurnell 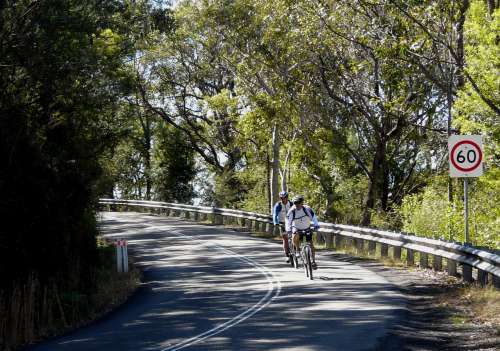 Ku-Ring-Gai. Whoever goes up, gets an easy ride down.

The Young Bull and his father went out on the bikes this weekend, riding in a couple of local national parks. We have new toys to play with – Garmin Edge 500 GPS bike computers which by some mystical process chat to NASA satellites and measure our speed, elevation, calorie count and wobbles around manhole covers.

The YB’s computer is linked to a heart monitor that calculates how fast he should be riding for maximum efficiency and endurance. The old bloke is happy just to wake up each morning and find that the ticker is still vaguely functioning.

The Ku-Ring-Gai Chase National Park has been YB’s favourite ride for a while now. He likes the hills there. Okay, they’re not the mighty Rockies or the Italian Alps but they can be steep; gradient 14% in places, according to the computer, and regularly over 10%.

We park the vehicle just outside the official National Park entrance. It costs $11 to go in there with a car, and it’s free on foot or on a bike. That means there are fewer cars than bikes in the park, and the road, newly surfaced last year, is excellent. 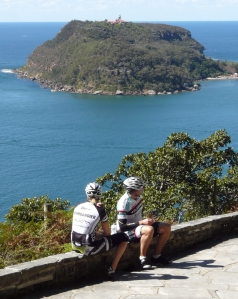 We settle for a short, sharp out and back route to West Head – just about 26.98km (approximately – NASA’s satellite wasn’t sure about a few of the metres.) ‘We could loop down to Akuna Bay, but that’s 44km and a big climb up,’ says the Young Bull, ‘and I’m feeling a bit tired’. Meaning he may not have the energy to carry his dad up the hill after the heart attack.

That suits me. I feel my honour has been satisfied just by getting up those hills, despite picking a gear way too heavy for me. And I freely admit to doing what YB calls ‘delivering the mail’, weaving back and forth across the road to reduce the gradient on the steeper sections.

Ku-Ring-Gai Chase has beautiful forest, but the real aesthetic appeal is the chance to see glimpses of the spectacular sea and islands in Pittwater below us. Serious riders may find the road surface even more beautiful than the scenery. 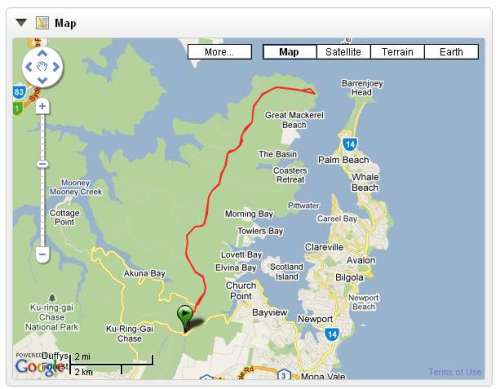 For details of the route we took and to sample the Garmin Edge 500 computer readout, click here.

On Sunday we tackle my regular ride, 69.37km out to Kamay Botany Bay National Park. We can start at our front gate. A short ride through Marrickville streets takes us down to the Cooks River. From there it’s mostly bike paths by the beach or wide, quiet roads past Brighton-le-Sands and Ramsgate to the Captain Cook Bridge. 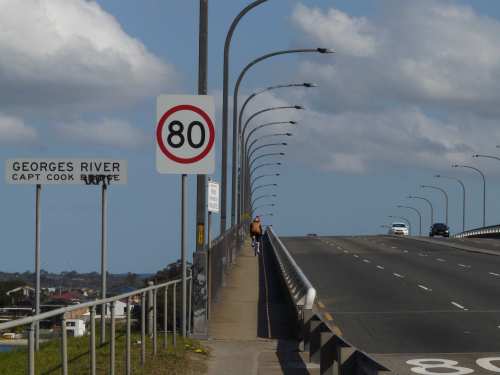 The Captain Cook Bridge - separate bike path, but I see too much of the back of that rider in orange

Once across the bridge into Taren Point, we’re into a mostly industrial area. Heavy vehicles are a bit of a menace on weekdays, but the surface is good and the roads are wide. On a Sunday we cyclists almost have the roads to ourselves.

Riding into the wind on the flat, it helps to have a big fit rider punching a large hole in the air in front of me. It would be even better if he’d slow down enough to let me slipstream him. 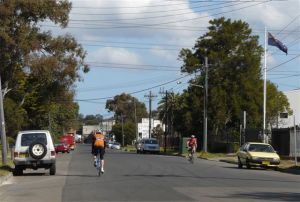 No cycle lane here, but a wide road with good visibility. Getting tired of trailing that orange guy.

Captain Cook Drive, which leads out to Kurnell, also carries heavy vehicles during the week, but the cycle lanes are wide, so it’s always quite safe. Then for the last few kilometres we can climb up into the national park at Cape Solander. The $7 parking charge keeps the cars at bay, and though the road surface is coarse, it’s pothole free. 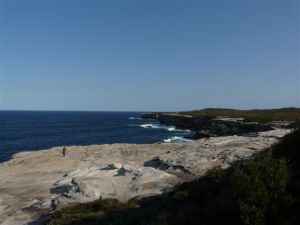 No whales at Cape Solander today, but worth the trip anyway.

Cape Solander is one of Sydney’s best whale-spotting vantage points. Humpbacks and southern right whales can pass at any time…except today. Sorry, they only surface when you forget to bring the camera. 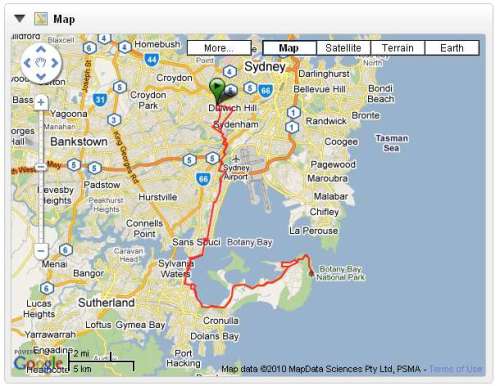 For details of the route we took and the Garmin computer readout, click here.