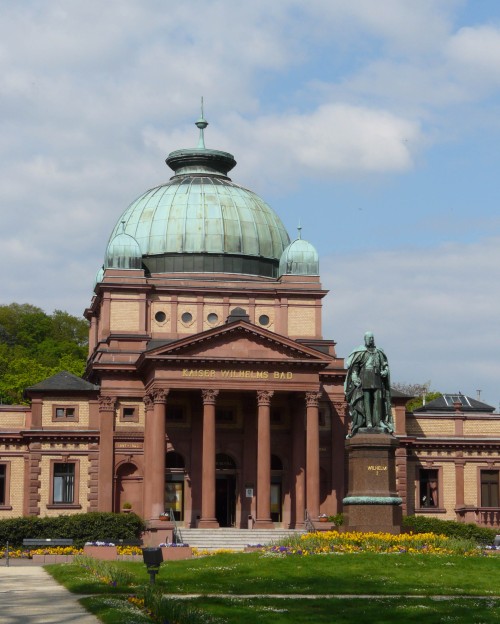 Where did Roman Emperor Hadrian and Fyodor Dostoyevsky share a bath with Elvis?

If you’ve ever been to Frankfurt, I bet you weren’t there just to enjoy yourself. You went for a conference or a trade fair, or you passed through Europe’s third busiest airport on your way to somewhere else.

I was there to work too, talking to students about my children’s books, but I had the weekend off and needed to unwind. Saturday brought the first fine weather after a grey week, so the Frankfurters turned out for some serious fun. The path by the River Main was crowded with bikers and joggers, most professionally dressed in lycra. Water and bananas were available at organised rest stops.

So the next day, my knapsack on my back, I headed for the hills of the Taunus region, north west of Frankfurt. A local expert had told me there was good walking there and it turned out to be excellent advice. 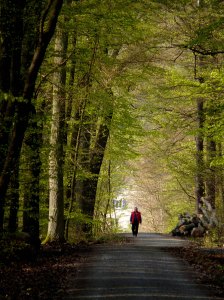 The train took just under 20 minutes to reach the old village of Oberursel. It’s a half-timbered town. There’s nothing like half-timbering to give a place appeal. If they half-timbered Rooty Hill it would become a tourist mecca.

But the buildings in Oberursel’s narrow streets are all original. During World War II, allied POWs were housed here, strategically close to the aircraft engine factory, so the town avoided the bombing that flattened much of Frankfurt. The little museum (also half-timbered of course) displays relics of the area’s Celtic pre-history, and evidence of the town’s claim to be the site of an historic event, the world’s first Soap Box Derby, in 1904. 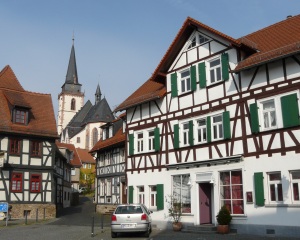 I walked on up the road, past the supermarket and apartments that now stand on the old prison camp site, and the motor factory that now turns out Rolls Royces.

Then at Hohemark, I walked into the woods. Local outdoor group, the Taunusclub, had marked a 25km ‘wanderweg’ with symbols on trees to make sure I didn’t wander from the weg. The Taunusclub itself was filtering into the forest with mountain bikes, schnauzers and nordic walking poles, and each passing member greeted me with a cheery ‘Morgen!’

Spring was springing in the woods, with bright new growth standing out against the dark conifers, and birds flitting around. Val-deri, val-dera! The walking was easy; steadily uphill on well-made logging paths.
Interpretative boards explained (in English and German) that the vague ditches and rises I was crossing were the remains of the Heidetrank Oppidum, or fortified Celtic village.

A statue of Jupiter on a tall Roman column rose surprisingly from the forest floor. The Taunus Mountains marked the edge of the Roman Empire, where the ‘civilised’ world met the barbarian world. Emperor Hadrian, on his way to erect his wall across Britain, installed a series of watchtowers on the ridges to protect the empire from the ravaging hordes to the north. 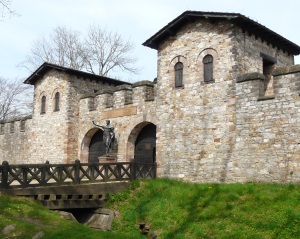 A little further on I arrived at a smart Roman fort in Saalburg, a statue of Hadrianus Imperator guarding the gate. It was in remarkably good condition for a Roman ruin, having been rebuilt in 1901 by Kaiser Wilhelm II. I’d heard archaeologists have their doubts about just how accurate the reconstruction is, but inside the walls were the crumbling remains of the real Roman buildings, and a museum displaying weapons, armour and sandals. Outside the taverna a small legionnaire in a plastic breastplate was eating ice-cream with his dad.

A 6km stroll downhill through the forest, following more Taunusclub signs beside a pleasantly babbling stream, took me to Bad Homburg. It’s not an inferior hat, but a charming and popular resort town with thermal baths. The tables were out on the terraces and people enjoyed the sunshine and absurdly large beers.

Hadrian must have kicked back here too. After a sweaty day beating off barbarians, he’d certainly have taken a relaxing dip in Bad Homburg’s roman baths. In the nineteenth century Kaiser Wilhelm, ever keen to improve on Roman architecture, built an elaborate bathhouse over them, surrounded by the extensive gardens of the Kurpark.

Now for EUR60 ($100) you can spend all day on simulated beach in the Sand Light Bath, shower in hail under the Ice Fountain, and finally have a Wave Dream in a dark room. Those in a hurry to relax can pay EUR25 and whip through it all in two hours. Lie on a real beach on a hot day, get caught in a hailstorm, then go home to bed and you’ve done it all for free.

Across from the baths is Bad Homburg Casino, ‘the mother of Monte Carlo’ according to its advertising. I walked in and out without losing any money, which makes me smarter in one respect than Dostoyevsky, who went broke here and in nearby Wiesbaden in 1865. No doubt he needed a cold shower in the Ice Fountain afterwards.

Dostoyevsky wrote a fictional version of his experience in the novel ‘The Gambler’. Was it a coincidence that the following book he wrote was ‘The Idiot’?

Bad Homburg itself is well worth a walk around. The squares have more of that attractive half-timbering and the tower of the schloss (castle) and steeples of the Erloserkirche overlook the beautiful schloss gardens.

‘So what about Elvis?’ I hear you ask. In 1959 he was stationed in Germany while in the US army, though because he was famous, he was given leave to stay in hotels instead of at the barracks with the boys. He chose Bad Homburg and Bad Nauheim as his home bases, and reputedly met 14-year-old Priscilla in baths in this area.

The Taunusclub signs directed me back towards Oberursel, through fields of yellow canola, with the wind sweeping down from the hills on one side and Frankfurt’s office towers poking out of the smoke haze on the other.

Outside Oberursel I found an educational billboard with a diagram explaining how the wind from the Taunus Mountains cleans the air of the towns. It had blown some clean air into my lungs too and I was ready for more serious work.

Trains from Frankfurt Hauptbahnhof (central station) to Oberursel and Bad Homburg leave every 15-30 minutes and cost EUR3.60 ($6) one way. Day tickets for all transport in the Taunus area are EUR8.90, and all the places mentioned above are accessible for non-walkers by train and bus.
Entry to the Roman Castle at Saalburg costs EUR3.