BRISBANE – riding after the storm 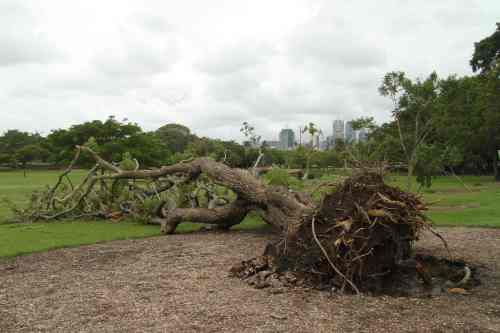 It could have been worse. It has been worse. But with at least four people dead and thousands of homes flooded it’s been quite bad enough.

One way or another, I didn’t choose the best day to arrive in Brisbane, along with ex-tropical cyclone Oswald. END_OF_DOCUMENT_TOKEN_TO_BE_REPLACED

Lycra is not required for cycling the Tour de Paris. Neither is a helmet!!!!

No street scene in Paris is complete without them now. The chunky brown bikes, shopping baskets on the front, are everywhere. It’s a reminder of the days when archetypal Frenchmen wore berets, carried strings of onions and rode bicycles.

We’d never worked out how to use them, but when we saw that everybody else was getting round on Velibs, we had to try them too. It was pas difficile, monsieur! END_OF_DOCUMENT_TOKEN_TO_BE_REPLACED 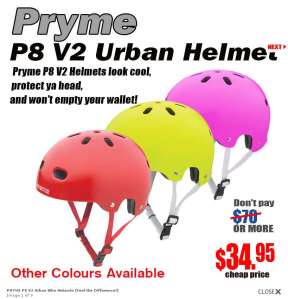 I can’t recommend these helmets. I haven’t tried one on. I have no idea about their comfort, safety or magpie-repelling qualities.

All I can be sure about is that I’d look very silly wearing one. But they may serve a very useful purpose… END_OF_DOCUMENT_TOKEN_TO_BE_REPLACED

While out on my morning ride today, I was swooped by a magpie. A sudden flutter of wings around my ears, a slap on the helmet and two squawks – one from the bird, the other from me. Australian cyclists know the problem only too well.

It’s that time of year; magpies defend their territory during the nesting season. These handsome black and white birds have a pleasant, musical call, strong necks, sharp beaks and a nasty nature. They are carnivores, direct descendants of velociraptors, it would appear.

They are also cowards, according to the old wives’ tale. They know they’re a protected species in Australia (though a noxious pest in New Zealand). They won’t attack if they know you’re watching them. Sneaky assaults from behind are their modus operandi, and they’re particularly vicious if you’re a dog, a toddler or a shaky cyclist who needs to steer with both hands.

Melbourne has produced a useful magpie swooping map to warn people about black (and white) spots, where the birds are at their most deadly. Melbourne looks like a dangerous place. Alfred Hitchcock could have used it as the location for his film The Birds. It’s rumoured that Melbourne cyclists are leaving the city in droves and heading north, hoping we’re not quite as badly affected up here in Sydney.

But we should all be grateful to a few courageous people who are prepared to put their heads on the line in the interests of scientific research and getting a laugh on YouTube:

BIKE HELMETS – an on again off again argument

Before the 'incident' - this man is invulnerable 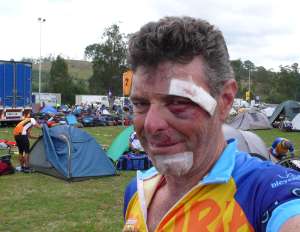 After - not so confident, but note that hair remains undamaged. Helmet at work?

I’ve heard the most contentious issues on the internet at the moment are burka bans, gun control, gay adoption…and mandatory bike helmet laws.

I’ve decided to bite the bullet, grit my teeth and step up to the plate and into the minefield… END_OF_DOCUMENT_TOKEN_TO_BE_REPLACED