Australia Day will be upon us at the end of the week. There’ll be Twenty20 cricket, barbies in the park and citizenship ceremonies. And indigenous Australians will be prominent too.

Some may be protesting at what they regard as white Australians celebrating ‘Invasion Day’. Many more traditional owners of the land will be taking part in the official and non-official Australia Day events.

We broke our road trip up the Hume Highway with a diversion to the national capital, Canberra.

My eye was caught by this memorial I hadn’t seen before, though it’s been there for over a decade. END_OF_DOCUMENT_TOKEN_TO_BE_REPLACED

Darling Harbour, Sydney. Rick Everett (kangaroo on right) has plenty of spring left, even after all the energy he put into Snow on Mars. But a good party needs good bouncers.

I took the bike for a loop around Sydney on Australia Day – through the kids’ concert at Darling Harbour, past the Opera House where the ferries were churning the water, up to the picnics at Hyde Park, and finally back to Enmore Park for the citizenship ceremony and the food fair. Not a hint of trouble anywhere – everybody busy and happy, though the temperature was over 40 degrees. END_OF_DOCUMENT_TOKEN_TO_BE_REPLACED 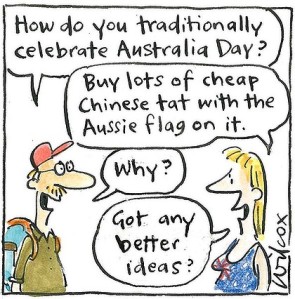 January 26th is Australia Day, and as I was trawling cyberspace in search of interesting things to do on a midweek holiday in Sydney, I came across a disturbing discussion on Twitter.

‘Like most women in headscarves I stay at home on Australia Day. Take a wild stab as to why,’ somebody tweeted.

‘Just pragmatism,’ it went on. ‘Last thing I want to deal with is drunks draped in the flag treating me like shit.’

I can’t judge whether the threat is real or imagined, but has our day of national celebration really come to this? How can it be that people fear harassment from fellow citizens who regard themselves as proud ‘real Australians’?

My most memorable Australia Day was some years ago when Mevrouw T and I attended her citizenship ceremony. We weren’t taking it very seriously. Mevrouw T will always feel more Dutch than Australian, though she’s been a resident here for years. Having an Australian passport would simply mean spending less time in immigration queues at Sydney Airport. To our surprise, a number of our friends insisted on coming along to the ceremony, to be held outdoors in Enmore Park, Marrickville. Our New Zealand-born friend Euan made us a plate of lamingtons with little Aussie flags stuck in them. It turned out to be a wonderful party.

Unforgettable was the large African family seated behind us. All were taking their citizenship together and their joy and excitement was obvious. We never found out their story, but it was wonderful to see them cheered by the crowd as they almost danced their way to the stage. They were delighted at what they obviously saw to be the start of a new and happy phase in their lives.

As people who spend a large proportion of our lives overseas, we’re not particularly nationalistic. Why should we or anyone else feel pride in simply being Australian or Dutch? Nationality is an accident of birth and history, not a personal achievement. Those treacherous boundary lines drawn on a map can be the cause of as many wars, distrust and human misery as differences of race or religion.

I cheer for Australians when they’re kicking or hitting a ball around, but I take it no more seriously than supporting Essendon AFL Football Club. It’s just a game, and if we lose, at least it will make some New Zealanders happy.

Let’s by all means feel pride in our nation when we get together with other Australians and do something worthwhile, preferably sacrificing some of our personal and national interest for the sake of other human beings with whom we share the planet. Like perhaps taking action on climate change even if others are hanging back, or welcoming an African family into our country.

On Australia Day I plan to get out and look for good things happening. I think Enmore Park, Marrickville would be an interesting place to start.