THE PRICE OF EATING GREEN – a little survey

Ten Kate Market...great looking vegies, but where have they been?

With our planned trip along the Pieperpad ahead, we’re taking more interest in organic food. We love the idea of organic farming. It sounds as if it will be good for our health, our taste buds and the environment.

It’s no surprise that it’s more expensive. We’re prepared to pay a premium for produce in a health food shop or farmers market, where we get the added benefit of being served by a healthy looking girl in a green apron or a bearded chap in a goats’ wool beanie who looks as if he was out tramping dewy fields in his gumboots, pulling vegetables out of the ground earlier that morning.

We want our eggs to have dark yellow yolks and to be laid by happy hens. In Holland they make a packaging distinction between an ‘egg’, a ‘free range egg’ (scharrelei) and a ‘free walking outside egg’ (vrij uitloop ei).

But how much more are people prepared to pay to buy organic?

Today I did a little price comparison between three local Amsterdam shopping establishments, all within a few hundred metres of each other. END_OF_DOCUMENT_TOKEN_TO_BE_REPLACED

If Nederland doesn’t win tonight, it won’t be because the fans didn’t try hard enough.

The first vuvuzelas started moaning early on Sunday morning. On the Museumplein, the square behind the Rijksmuseum, workmen were setting up TV screens bigger than most Amsterdam houses. The Oranje fans were crowding the cafes and marking out their picnic spots.

The jokes are flying around. The Spanish are splitting their sides about a new Dutch striker, Van Aperter. “Van a perter” is Spanish for “going to lose”. The Dutch have a joke about the Silver Fleet, a Spanish armada they pirated in 1628. ‘Tonight we’ll give them back their silver,’ goes the hilarious Nederlands one-liner.

The Albert Hein supermarkets are running out of ‘beesies’, the free furry worm-like toys being given away with every 15 euros’ worth of shopping. They come in red, white and blue, and also in orange. There was no warning of this impending beesie drought. I feel so lucky to have got my hands on one of the last blue ones, and I can only imagine the disappointment of beesie lovers who missed out. Expect to see these wonderful collectors’ items on ebay from Monday morning. 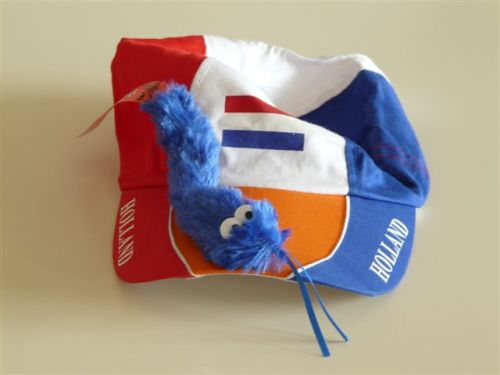 STOP PRESS: Ah well, the result is known. The team tried hard, lost ugly, won the battle for yellow cards, had their chances, blew them, and went down 0-1 in extra time. This being Holland, the fans will retire to the pub and plan the welcome home party for the team on Tuesday. Should be good.