The oldest town in the Netherlands. Not so many people know about it.

‘This landscape always reminds me of Holland,’ said my mother, years ago, somewhere outside Melbourne, on a road between Springvale and Frankston.

She’d never seen Holland and neither had I, but we both knew what she meant. What I only discovered recently was that the image we had of classic Dutch landscape came from 19th century paintings. Even the word ‘landscape’ comes from the Dutch ‘landschap’.

The painters of the Haagse (Hague) School – Anton Mauve, Willem Roelofs, the brothers Maris and others celebrated the flat, green, boggy fields, low skyline, big clouds, black and white cows and a windmill or church spire to add a point of interest.

When their paintings started to achieve recognition in the US, the charm of Holland entered the collective consciousness.

There’s a wonderful exhibition Holland op z’n mooist (‘Holland at its most beautiful’) in the Gemeentemuseum Den Haag and in the Dordrechtsmuseum. If you can get there before 30th August, do! If you can’t, do not grieve; there are great examples of the work in their permanent collections.

This kind of thing…

Mevrouw T and I took a few days to ride through the area depicted. It’s the Groene Hart (Green Heart) of Holland, the area roughly bounded by Amsterdam in the north, Leiden in the west, Rotterdam in the south and Utrecht in the east.

We found plenty of scenery that would have reminded my mother of Holland.

Outside Gorinchem. Though the windmills may have changed shape, things are much the same as 100 years ago.

The cows are still there too.

Apart from the charm of the countryside, there was the bonus of visiting towns we didn’t know very well. 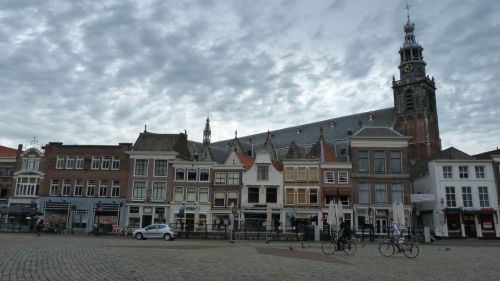 Gouda is well known as the producer of the most popular cheese in NL. It’s less well known for its beautiful market square… 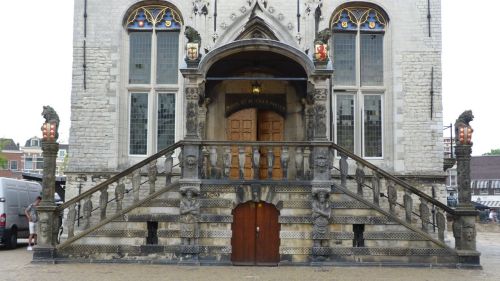 …and its ornate stadhuis (town hall).

From Gouda we pedalled on to Dordrecht, the oldest and one of the most attractive towns in the country. That’s it at the top of this post. We stopped in at the museum to see more of those lovely Haagse School paintings.

…and for comparison, here’s the Dordrecht stadhuis.

There are plenty of Dutch people who know little about Gorinchem. Nice square though, when the sun is shining…

…and a view of the harbour from our boutique hotel.

We’d had to fight our way into headwinds (they normally come from the south-west during the summer months) to get here.
So it was a relief to be able to pedal north for a day, with the wind behind us… 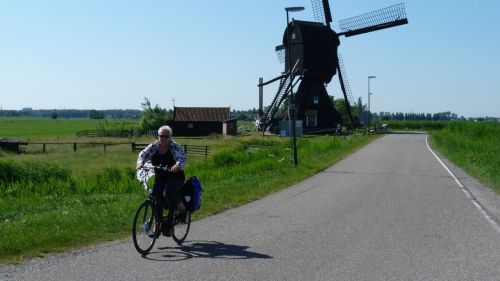 How much more Dutch can you get?

3 responses to “CYCLING THE GREEN HEART – Holland’s most beautiful”