WHERE DUTCH ARCHITECTURE IS A JOKE

The gable of the Zaandam Stadhuis (Town Hall) enters into the playful spirit of things.

Dutch architects have been hard at work in and around Amsterdam, inserting colourful humour into some very public buildings, and it’s remarkable that, in the Zaanstreek, local planning authorities have been happily going along with the joke.

It’s remarkable because the Dutch are not noted for being whimsical. They’re a nation of merchants, shipbuilders and sailors. Their farmers have spent generations slogging around in clogs, shovelling manure onto fields, while engineers laboured through the centuries to keep the whole country from sinking into the sea. These serious pursuits are on display in the Zaanstreek, the district along the River Zaan.

The Zaan region is a short train or bus ride from Amsterdam. Just for a laugh, I decided to travel there the Dutch way, on the bike, a pleasant 40km round trip through the Twiske nature reserve. It was a very sensible decision. The Twiske’s fields, forests, lakes and wetlands are popular with recreational cyclists, walkers and picnickers. The land is flat and the cycle paths safe and well signposted.

It took me just over an hour to reach the Zaan. I knew I’d arrived when I saw the tourist buses disgorging visitors to take their selfies in front of the windmills on the riverbanks, turning slowly under sail.

Windmills of the Zaan.

Local farmer Cornelis Corneliszoon patented a crankshaft in 1597 and his windmill could saw logs thirty times faster than anyone could do it by hand. What seems to us now such an obvious device, converting circular motion into linear, turned the Zaanstreek into the first industrialized area of Western Europe. Soon there were over six hundred mills in the region, grinding corn, sawing timber and mixing paint to support the mighty Dutch marine industry.

Several of the twelve remaining windmills, maintained by enthusiasts, are open to the public in the theme park known as the Zaanse Schans, now one of Holland’s biggest tourist attractions, with 800,000 visitors each year.

Calling it a ‘theme park’ makes it sound false and cheesy, and indeed it does feature all the clichés that many visitors associate with The Netherlands – clogs, cheese, tulips and of course those windmills.

However, the charming wooden houses with their dark green walls, white window frames and terracotta roofs are authentic 18th and 19th century originals, moved here since the 1960s from other parts of the country to create a living, working village.

There are small museums of clogs and clocks and casks. There’s a sweet shop and a recreated grocery store. Some houses have genuine Dutch families living in them, paying affordable rent in return for maintaining them in their original state and putting up with tourists stickybeaking through their lace curtains. 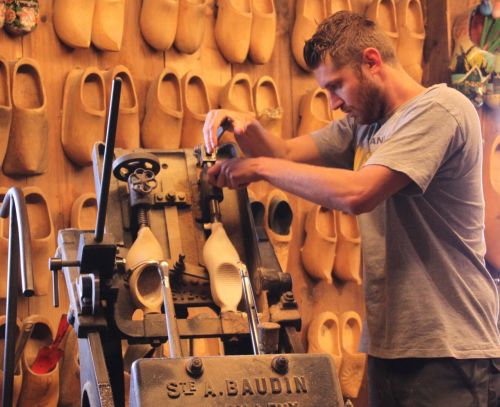 Zaanse Schans clog-maker doing his thing in an entertaining way.

My first stop was the clog museum, where I could admire more weird and wonderful clogs than I ever thought I needed to know about; plain ones for work, elaborately painted ones for Sunday best. There were even a few jokey ones, with funny faces.

In the workshop a clog-making demonstration was in full swing, with an English commentary that was entertaining, if slightly, ‘I’ve told this one ten times already today; it always gets a laugh.’ A tour guide translated it into Russian for her bus party. They laughed too.

Making a pair of wooden ‘klompen’ by hand used to take two to three hours, we were told. We didn’t have to wait that long. Our Zaanse clog expert did the job with an electric machine, rather like a 3D version of a key cutter. The blank model turned on a spindle, while next to it the chips flew from a lump of wood as the machine carved a clog in less than five minutes.

The Russians applauded. The clog-maker took a mock bow, ‘on behalf of the machine,’ he joked.

A Chinese tour group replaced the Russians as a new wood block was mounted on the clog machine and we spilled out into the gift shop. A simple undecorated pair of clogs costs from EUR25, about $35. Not bad value. Learning to wear them may be a painful process (yes, I have tried) but drill a hole in the bottom and they make attractive flowerpots.

The Museum van het Nederlandse Uurwerk, the Museum of Dutch Clockwork, is not a large museum, but it holds a wonderful collection of examples of the clockmaker’s art through history, with an enthusiastic and knowledgeable English-speaking guide. 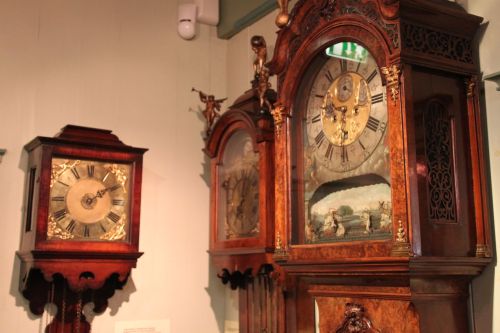 Superb examples of the clockmakers’ art.

I skipped quickly through Catharina Hoeve (‘homestead’), more a cheese shop than a working dairy, and other gift shops, not being in the market for Delft blue pottery, diamonds or wooden tulips.

Then I climbed back in the saddle and followed the river into the township of Zaandam.

Russian Czar Peter the Great came to Zaandam in 1697 to study shipbuilding. A sculpture in the town square, a gift of the Russian government, commemorates his stay, and the house in which he lived, albeit for just eight days, is now a small museum.

Artist Claude Monet also spent some months living and working in Zaandam in 1871 and a little blue house he painted (that is to say ‘depicted on canvas’) still stands in the Hogendijk.

Now Zaandam has a new card to play in the quest to attract visitors. Last year, the main shopping drag underwent a radical transformation. The Gedempte (filled in) Canal was unfilled, turned into real canal running down the middle of a mall from which cars and even bikes are excluded. The result is a thriving retail strip – one of Holland’s busiest, the canal crisscrossed by little bridges with plenty of places to sit by the water.

Things change when you land in one of Holland’s busiest shopping streets. Last year they re-inserted a canal down the middle, making it a pedestrians-only zone.

At the station end is a group of extraordinary buildings, one of which is fast becoming one of the best known in the country.

Zaandam’s Inntel Hotel, opened in 2010, looks like a cluster of over sixty traditional Dutch wooden houses, piled on top of each other by a playful child to create a higgledy-piggledy structure twelve storeys high. Architect Wilfried van Winden even perched a tribute to Monet’s blue house in a top corner. 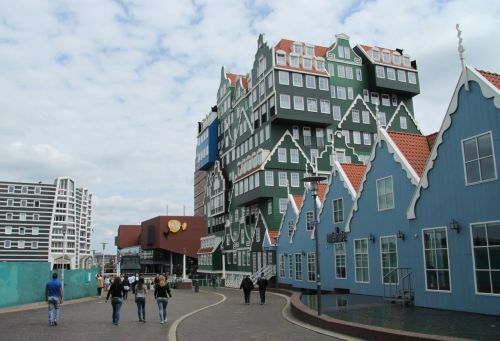 The designer fun continues inside, with rooms decorated with wall-sized photos and advertising posters from the Verkade biscuit and chocolate factory, a Zaanstreek institution.

The fence by the Stadhuis.

All of this was predictably a controversial development, with serious opposition even from Dutch friends of mine who don’t completely lack a sense of humour. ‘Horrible kitsch! A punchline to a joke that will soon wear thin!’ growled some killjoys. But Zaandam resident Marlies told me she loves it, ‘If you’d seen what was there before…Zaandam was nothing!’

Love it or loathe it, it’s certainly daring, different and undeniably Dutch. Architecture as fun has unquestionably put Zaandam on the tourist map. It gave me a smile that lasted most of the way as I rode back to Amsterdam. That can’t be bad.

8 responses to “WHERE DUTCH ARCHITECTURE IS A JOKE”