Markermeer – they don’t call it ‘Waterland’ for nothing.

A sunny day, a gentle breeze, a work deadline met, bike chain oiled and legs in need of a stretch. Time to do one of my favourite loop rides from Amsterdam, out into Waterland, aiming to visit five of Holland’s most picturesque villages.

Two of the most visited posts on this blog are about Waterland and Dutch villages, so there’s another excuse to put the two together in one pretty, watery ride and have a story to tell at the end of it.

Amsterdam knows that lots of people want to ride and walk in Waterland. The ferries leave from the wharf behind Centraal Station every few minutes. They’re free, and take only (motor)cyclists and pedestrians.

After that, there are any number of routes I could have chosen. I opted for an easy ride, first through the parkland along the North Holland canal, then following the signs to the first of my villages, Broek in Waterland.

The village is notable for its 15th century church (rebuilt in the 17th century), its many old wooden houses, its lush gardens and its extreme cleanliness. Early travel books referred to it as the temple of Dutch neatness, wikipedia informs me. In the spring, massed hydrangeas are the fleurs du jour.

It’s only 3 or 4 kilometres from here to Monnickendam. Normally. I tried to be tricky and scout out a route I hadn’t ridden before. After a couple of kilometres I discovered why cyclists should follow the signs. The road takes a dogleg and becomes a sand track. So that’s why there were no cars!

The ‘monks’ dam’ probably takes its name from the 15th century cloister by the great St Niklaas Church. Now it’s a pleasant place to stop for a koffie in the old building with the charming, chiming clock tower – the Waag, or ‘weigh house’, looking out on the harbour.

Or you can get your koffie at the cafe across the road, with a view of the Waag instead. I think it may be cheaper in the less spectacular establishment.

If the wind is in your face, it can be a bit of a slog to ride first the dyke and then the causeway to the former island of Marken. It’s worth a bit of effort, and you can promise yourself a ride back with the wind behind you. Meanwhile you have a good view of the Markermeer, pictured at the top of this post.

Marken is touristy these days.

It’s apparently compulsory to paint your wooden house on Marken dark green or black with white trims. It has the feel of an open air museum and indeed attracts a steady stream of visitors tricking out of their buses.

I took the extra trouble (I hope you appreciate it, dear reader) to ride out to the lighthouse on the tip of the island, to get a shot that appears on many Marken postcards: 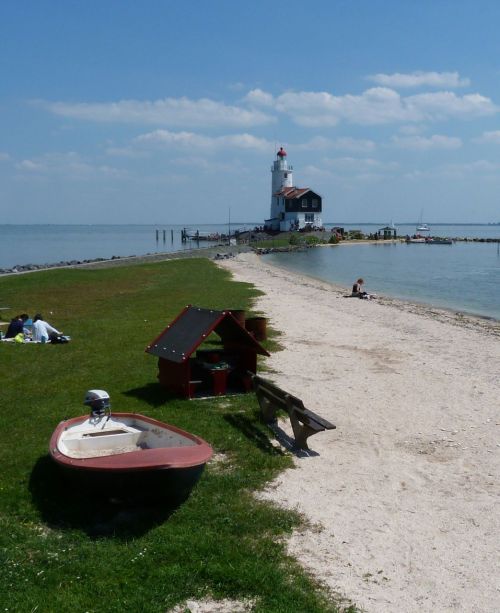 The lighthouse, known as the ‘Paard van Marken’ – the Marken horse.

With the wind behind me, now I could sail back along the dyke, the Markermeer to my right, the Ijsselmeer to my left, waterbirds breeding on both.

The road is narrow and cobbled along the dyke through Durgerdam. I used to be a little nervous here when faced with an oncoming bus or delivery van, until I worked out that they are so used to cyclists squeezing past them that they drive carefully too.

So I found the cafe with the koffie (it’s ok when you need a rest, but nothing like real ‘coffee’) and watched the kids cycling home from school – always something that tells me I’m in a civilized country.

Just a few kilometres to go…

‘Woude’ is a wood or forest, ‘schelling’ a old Dutch word for a divide. So this is where the forest separated city from countryside. There’s no longer a forest in Schellingwoude, but there are couple of old churches, a line of historic cottages and yes, of course, more cafes.

My 72km loop ride around the five villages took me just over four leisurely hours, but it included a few kilometres to get to and from Centraal Station, that false turn by Broek in Waterland and a circuit of Marken. A better-organised cyclist could cut the route to about 55km and still get to all the villages.

There are many other places I could have included on a longer Waterland ride – Edam, Volendam, Ransdorp, Zunderdorp…next time?

Non-cyclists can get around Waterland by bus. The bus station is also right behind Amsterdam Centraal. A day pass costs EUR10. For information on buses CLICK HERE.

For an inzoomable map of my ride CLICK HERE.