OFF THE HUME #2 – Australia’s prettiest town? 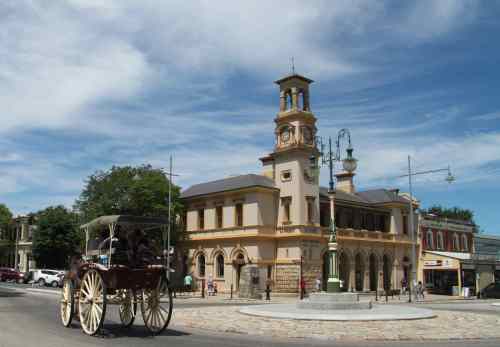 The horse and cart may be a modern addition, but the Post Office is old.

I’m open to suggestions here. What’s Australia’s prettiest small town? My bet is that it will be a short list. There are very few Australian towns worth visiting for their appearance.*

Plenty have spectacular locations by beach or forest, some have arty-crafty communities, trendy shops or lively festivals, but hardly any have attractive streetscapes.

So it was a rare treat to duck off the Hume Highway and find a place in northern Victoria where residents have gone to the trouble and expense of preserving some heritage. It seems to be paying off for them.

Making things pretty has simply not been a high priority for most rural Australian communities. Why waste money painting the Town Hall in heritage colours and putting up historical plaques for tourists when the local swimming pool needs re-tiling? You’d feel the same if you had our blazing summers.

The new McDonald’s/KFC/Pizza Hut will bring jobs and give the kids somewhere to hang out, so we’ll let them have the prime real estate on the corner of Main St. They’d like the trees lopped so they don’t obscure the neon sign? No problem. We’re a ‘can-do’ council in Oodagajarrigaringa Shire.

Apart from the fact that few Australian towns have a history of more than 150 years, it takes a time of prosperity to provide the money to invest in buildings worth preserving. Doing it tough in the bush has been more the Australian story.

Beechworth boomed during a gold rush in the 1850s.

The result was a main street lined with elegant public buildings and hotels featuring wide verandahs and elaborate wrought iron.

The main drag of Beechworth, Victoria.

The rush was short-lived, but when the gold ran out and the miners left, Beechworth found itself with a grand post office and a gaol.

A very young Ned Kelly passed some time on remand here. In the nearby courthouse his mother was sentenced to three years’ hard labour. The gaol is still a going concern.

These days Beechworth also benefits from being close to the Victorian Alps, and is a convenient stopover for those heading for the ski slopes in winter or the hiking trails and wineries in summer. So although it’s a few kilometres from the Hume Highway, it still attracts a steady stream of visitors, Mevrouw T and I among them, strolling the streets.

It was a shame about the line of parked cars getting in the way of my shots, but we have to be practical. It appeared that every facade has been restored and every sign painted in heritage colours.

They may not all be nineteenth century, but they’re trying to look that way.

Signs in colonial colours only, please. 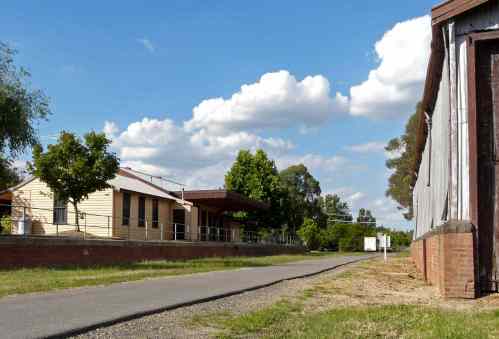 The Murray to the Mountains rail trail, some 95 kilometres long, is another aspect of Beechworth that appeals to me. I must ride it on the bike some day.

The local museum is named after Robert O’Hara Burke, co-leader of the ill-fated Burke and Wills expedition. He was Senior Inspector of Police, stationed in Beechworth from 1854-1857.

Our detour off the Hume added a couple of hours to our trip to Sydney. Time well spent, we felt.

We’d stop the night in Albury/Wodonga, then move on at a leisurely pace.

*I tried to think of examples of attractive Australian towns. Leura in the Blue Mountains, Berry on the NSW south coast…all further suggestions are welcome.