MERRICKS, VICTORIA – walking on the mild side 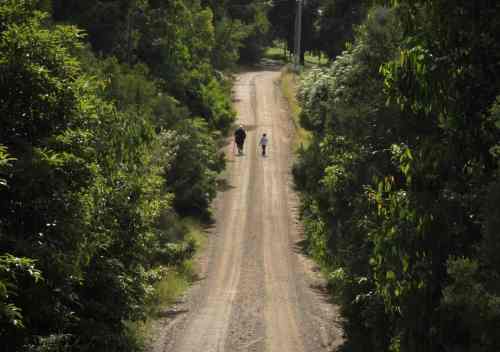 A car may come along, but it probably won’t.

Like most right-thinking people, we ate and drank more than was absolutely necessary over Christmas. Fortunately we did it in an area with ideal places to walk off the damage and the guilt.

The Mornington Peninsula, the strip of land between Port Phillip Bay and Westernport Bay is Melbourne’s summer playground.

The Port Phillip side is the busy, almost suburban one, boasting all mod cons and proper shopping. Westernport is more rural – farms and wineries, broken by patches of forest. We’re committed Westernporters.

Port Phillippians pity our lack of attractions. Where are the cinemas and bars? Where’s the nightlife? Where’s the golf and the surf? And those daggy shops…!

As we listened to the New Year’s Eve fireworks popping from the distant side of the hill, we toasted our good sense in choosing the quiet side.

Westernport towns (Hastings, Bittern, Balnarring) stock the basics, but they are a little dull. We like that.

Merricks General Store. Once a general store, now a restaurant and wine outlet.

Westernport beaches are not great for swimming, at least by Australian standards. They’re generally safe, even for kids, but there is no surf except at Point Leo. Somers Beach has all but disappeared, replaced by a stone sea-wall protecting the now rather run down Somers Yacht Club.

Shoreham is rocky. Merricks is famous for the seaweed that sloshes in the water and clings to the legs and hair of swimmers.

They’re all excellent walking beaches, however, with rockpools to browse at low tide. And they’re seldom if ever crowded. 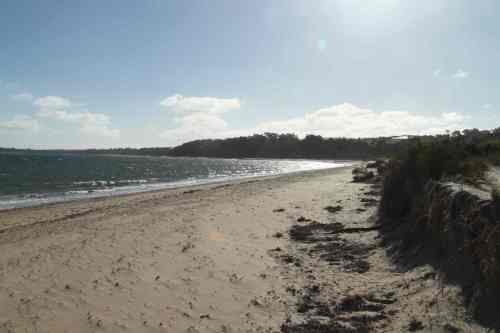 Further inland there are lovely walks too. It’s been many years since a railway ran between Merricks and Red Hill and we don’t expect it back any time soon. Meanwhile the route has been turned into a 6 kilometre trail for walkers, joggers, mountain bikers and horse riders.

Victoria has led the way in building these rail trails. Would that other states could emulate them. The Red Hill to Merricks route is well used, but not so much that it becomes overcrowded. We still manage to wish everybody we meet good morning.

There are a few busy roads cutting across the Peninsula, though there are plenty of quiet ones too, attracting serious and recreational cyclists to their rolling hills. I must bring the bike down here some time, though I’m intimidated by some of the fast-moving traffic on narrow roads.

We haven’t been getting down here often enough. We must do it more in future.

11 responses to “MERRICKS, VICTORIA – walking on the mild side”