WHITE RABBIT GALLERY – is nothing too hard for a Chinese artist?

Something that impresses us about much Chinese art, quite apart from what it looks like, is the amount of time, effort and detailed work which has gone into its creation. It seems that nothing is too much trouble.


In Sydney’s White Rabbit Gallery, one of the world’s greatest private collections of contemporary Chinese art is available to anyone who’s interested, absolutely free. Thanks, owner Judith Neilson, for opening our eyes to this world of imagination and whimsy combined with extraordinarily patient effort.

Would any western artist bother to create a hill of sunflower seeds, each one a hand-painted ceramic? That’s what Ai Weiwei has done.

Ai Weiwei’s hand-painted sunflower seeds, inspired by his family’s times of hunger, when such things were luxuries. ‘Each one is valuable,’ he says, and given the work involved we believe him.

Mr Weiwei possibly knows a local factory that could knock out a heap of plastic sunflower seeds which would look exactly the same as what he’s made. But that would defeat the purpose. The whole concept is to do it by hand, however much work that involves.

Gao Feng‘s Flying features hand luggage wittily reincarnated as miniature helicopters. Any other artist would be happy with the concept and would leave it at that. Mr Feng goes a step further. The video in the gallery shows that Gao Feng’s creations really can fly, with the aid of a remote control. 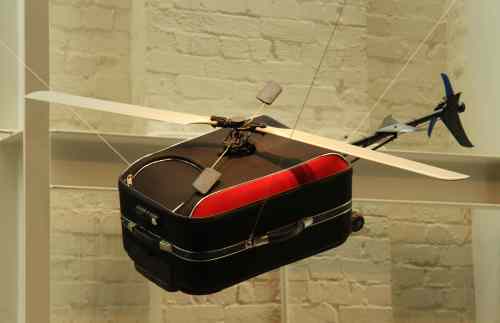 Nice idea of Ye Sen’s to chain these blocks together. Then we’re told the whole thing, chains included, is carved from a single piece of wood.

Inspired by Chinese lanterns, Li Hongbo has pressed together sheets of paper into concertina stacks which he then cuts into shape with an electric saw. There must be an easier way to do this, but here is the result…

And when an almost identical stack is spread out, it looks like this:

The shop and cafe are very popular, and if the oolong tea was a little lacking in oomph (well, that’s what Chinese tea is supposed to be like, isn’t it?) the surroundings were very congenial.

We loved the ceiling decor of massed birdcages.

It took us far too long to organise our first visit to White Rabbit Gallery, a short walk from Sydney’s Central Station. Since it opened in 2009, friends have regularly raved about it, but it wasn’t until last week that Mevrouw T and I managed to find our way to it through the back lanes of Sydney’s Chippendale.

The world needs more philanthropists like Judith Nielson and her husband Kerr. Packed into four floors is some of the most exciting, entertaining art we’ve seen. Exhibitions rotate every few months. We’ll be back soon. 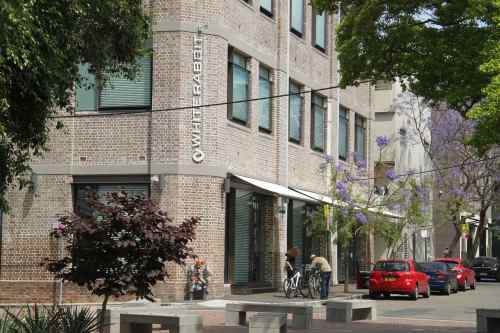 15 responses to “WHITE RABBIT GALLERY – is nothing too hard for a Chinese artist?”