AMSTERDAM – back home on the Schinkel

If you’re lucky enough to have wifi access from the cafe across the road, you can work in the outdoor office.

It’s nice to be ‘home’ in Amsterdam, at least for a little while. Followers of this blog may have noticed that Mevrouw T and I have been getting out and about rather a lot recently.

‘When are you going to spend some time in Amsterdam?’ Dutch friends and neighbours are asking. ‘Aren’t we interesting enough for you?’

We came back this week and Mevrouw T found an article in a Dutch newspaper featuring the history and present-day delights of our part of town, the Schinkelbuurt. The writer made it sound very interesting indeed, so I took the camera out for a walk, then googled the Schinkel to see what we’d been missing.

I’ve taken so many dawn photos on the Schinkel, but I never get tired of them.

The Schinkel is a river leading out of the Nieuwe Meer (New Lake), which became ‘canalized’ in 1808 when a connection was dug to the Kostverlorenvaart, a major shipping traffic route to the sea since the Middle Ages.

It’s still one of Amsterdam’s busiest waterways. We enjoy watching the steady stream of boats that use it – the heavy sand barges that steer under the bridges with only centimetres to spare on either side, the pleasure boats and runabouts, and in the warmer months, the cruise ships with the bikes on deck.

It was nice to get my own barge-eye view of the Schinkel earlier this year.

The Schinkelbuurt is on the border between the stately 19th century homes of the ‘old money’ in Amsterdam South and the less well-to-do, now culturally diverse Baarsjes area.

The  Vondelpark kept the two neighbourhoods apart with its narrow strip of green, until Amsterdam’s expansion in the early 20th century let them spill over into each other at the Schinkel end of the park.

The ferry across the Schinkel, around 1900. Photo: Gemeentearchief, Amsterdam

We love it here.

I love my morning pilgrimage to Klopper and Stolk bakery.

I love crossing the bicycle bridge as the office workers, the high school students and the mothers ferrying children to school cycle past into the Vondelpark, the easiest and most pleasant route to the centre of Amsterdam.

The leaning tables of Cafe Gent aan de Schinkel. Hold onto your coffee!

The coffee at Gent aan de Schinkel may be disappointing, though no worse than most Amsterdam swill, and it is a great place to sit at the ricketty tables by the water.

Dirk van den Broek has a reputation as a cheap supermarket and our particular ‘Dirk’ supplies us well with life’s necessities.

We make no use at all of the smaller businesses that line the canal – the Imps and Elfs kids’ clothing, the smart Boffi kitchens, the small art galleries, the tailor on the corner, KwikFit car repairs – but it’s nice to know they’re there.

And it’s a short and pleasant bike ride along the Schinkel to the nature reserves at the Nieuwe Meer and Amsterdamse Bos. It’s good to be back. 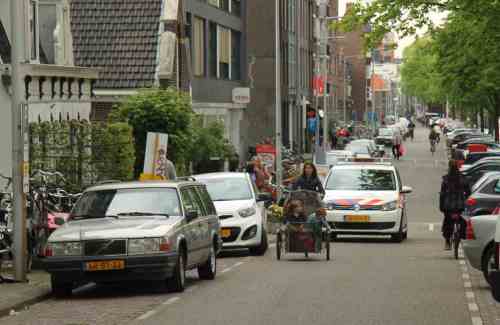 The Sloterkade is no longer a wharf. It’s a narrow street, where bikes outnumber cars.

There used to be a lock here at the Overtoomse Sluis, hence the little sculpture on the bridge.

The geese on the Schinkel – they breed on the banks up near the Olympic Stadium. 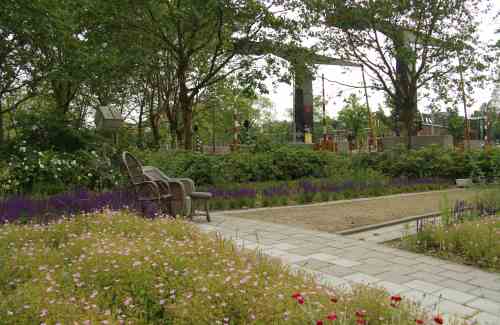 The communal garden tended by residents.

Elegant houses in the Schinkelhavenstraat.

Parking is sometimes an issue, for bikes, cars and small circuses. 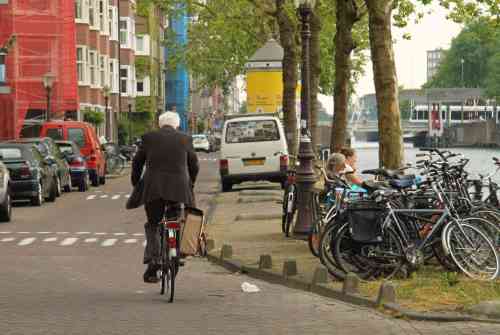 The bike is the preferred means of transport for most people.

The 1634 house of the waterways master has survived.

Amsterdam bikes come in any colour, as long as it’s black. An exception is by the werkplaats ‘workplace’ of Imps and Elfs children’s clothing.

4 responses to “AMSTERDAM – back home on the Schinkel”