HAS THE BRONX GONE SOFT?

Nobody we’ve met on this trip wants to be from Manhattan. It’s almost acceptable to live there in some down-market neighbourhood, but to COME from there suggests a cossetted, privileged background.

Everyone is quick to tell us they’re from the ‘boros’, Brooklyn, Queens or the Bronx. (Yes, a few people live on Staten Island too, but we haven’t met them yet.)

‘Nothing soft comes out of the Bronx’, says the advertising for Everlast, the company that began manufacturing boxing gloves and punching bags back in 1910. In fact, Everlast themselves threw in the towel and left the Bronx a few years ago, and went elsewhere to make trendy street shoes for those who will never need a mouthguard.

Al Pacino comes from the Bronx, so do hip-hop and break dancing. So in the interests of research, Mevrouw T and I went into the Bronx to see how tough it really was.

I’d thought the name was Dutch, but it was a Dane, Jonas Bronck, who established a farm here under Dutch rule in the early 17th century. The indigenous Lenape were gradually edged out (of course) and over the following centuries in came a stream of immigrants – Irish, German, Jewish and Italian.

After World War II they were joined by African American, Caribbean and Hispanic settlers. I had to ask directions a few times and Spanish would have been more useful to me than English.

Our introduction to the area came on a Real Bronx Tour, during which guide Gerry (from Queens, lived two years in the Bronx) gave us an entertaining running commentary and detailed history as we watched the Bronx slide past the tinted windows of our comfortable bus.

I went back later on the D train from Manhattan, then continued on foot, taking Gerry’s excellent advice about the best places to visit.

At first glance, the Bronx streets can look intimidating…

At second glance, interesting things are happening in the Bronx. 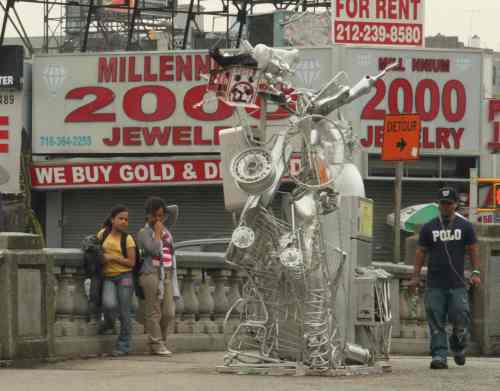 No idea who did this or why, but there it is.

‘The Bronx is burning!’ was the cry of the 1970s as disaffected tenants and shonky landlords after some easy insurance money set fire to the place. It was a no-go area for the police, and ‘nobody cared what happened up here,’ according to Gerry. That was forty years ago, and things have improved enormously.

The Bronx still houses some of America’s poorest, but some of its richest too. The 15,000 students at the Jesuit Fordham University give the area around their campus a lively buzz. 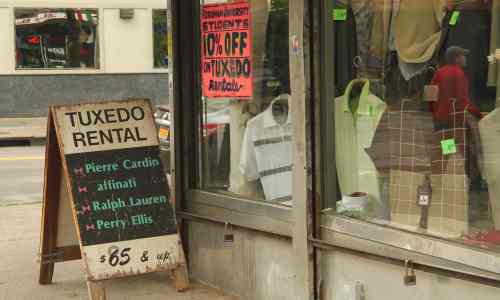 I hope the Pierre Cardin tuxedos are in better condition than the sign, but in the bad old days nobody in the Bronx would have wanted to hire one.

Gerry directed us to Little Italy, smaller than Manhattan’s version perhaps, but equally old (it’s celebrating a centenary this year) and with few tourists.

The coffee really tasted like coffee, a rare thing in New York. 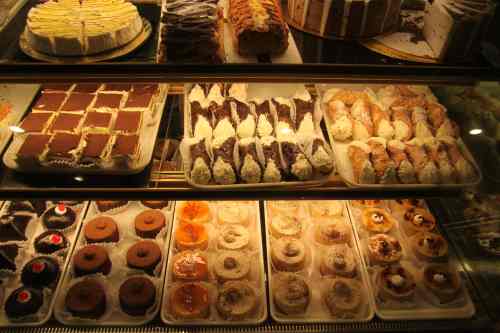 Giovanni Palombo opened his pasticceria in 1897. It’s still doing an excellent job and has expanded into six locations around the Bronx area.

The Bronx has become the greenest of the five New York boroughs, home to the enormous New York Botanical Gardens, and the Bronx Zoo.

Langurs in Jungle World, Bronx Zoo. A very theatrical enclosure and the monkeys seem happy with it too.

And of course, the Bronx has one final attraction, which appeals to New Yorkers from all boroughs. 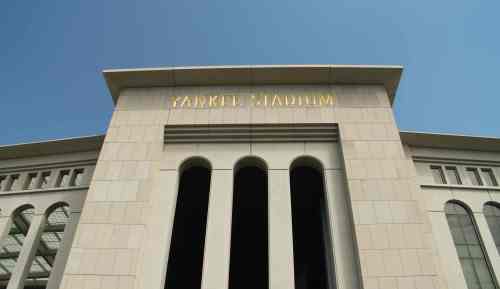 It took about half an hour on the D train from the Rockerfeller Centre to reach Fordham in the heart of the Bronx.

The writer and his fellow researcher were the guests of Real Bronx Tours and NYC & Company.

3 responses to “HAS THE BRONX GONE SOFT?”