Of course when in New York we had to go to a ball game. Yankees are the team all the other fans love to hate, we heard. They bought Babe Ruth from the Red Socks, er, some time ago now. They have an obnoxious owner, too much money and think they can buy a World Series.

They also have Derek Jeter and A Rod, Alex Rodriguez, two of modern baseball’s biggest stars.

But the Detroit Tigers, beaten 5-6 by the Yankees on Friday evening, promised to offer stiff opposition at 16.00 on Saturday.

Our friends Liz and David had booked tickets – a modest $20 for seats in the bleachers – so we took the D train for the Bronx.

We surfaced at Station 161, and emerged into the merchandise, the bars and the swarming army of blue and white Yankee fans. Tigers fans were rare, but certainly not endangered. The atmosphere was relaxed and friendly, more like an Australian cricket crowd than an English football crowd.

Get your Yankee cap, shirt, beanie...cheaper than inside the ground.

Stan's Sports Bar and the Yankees, an Institution, according to Stan.

Outside the ground a little league game was in progress, significantly with amplified commentary in Spanish. 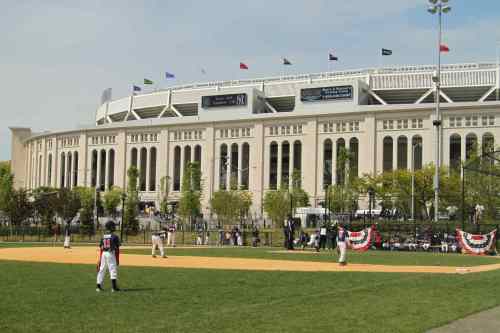 The stadium itself is brand new, the third edition of the Yankees arena.

Inside the stadium we ascended to the dizzying heights of section 428. Oxygen was not available, though other sustenance was.

We settled for Miller Lite - the healthy alternative.

They do know how to ingratiate themselves with ageing Australians though. The girl insisted on seeing my proof of age before she’d serve me alcohol. Usually I’m only asked for proof of age when using my seniors card. We established that I’d been over the legal drinking age for about 40 years.

We stood for the National Anthem (we’d later stand to honour our servicemen and women overseas, and rise to our feet as the groundstaff swept the diamond while dancing to ‘Down at the Y.M.C.A’.)

Then the game began. Badly, for the Yankees. By the top of the second innings, they were 1-6 down with their starting pitcher replaced.

There was some desultory abuse hurled from the bleachers, then the fans settled back for a couple of hours of stoically enduring the humiliation. And the popcorn.

We're here for the cultural experience, after all.

Choreographed sweeping to the music of the Village People.

Only in the 9th and final innings was hope restored. Three Yankee runs brought the score to 5-7, with two out. A man on second. One homer, just one hit, would force the game to extra innings…

He swings, he connects, it’s high, it’s caught. It’s all over.

The fans packed into the subway trains...

...while the rest of us patiently waited for a less-crowded train. Thanks for taking us there, Liz and David!