That's North Head in the distance. The end of the road is in sight.

If you want a nature walk by Sydney Harbour, this is as good as it gets. The ten kilometre track through the national park from The Spit to Manly is easy to walk if you don’t mind a few steps, gives lovely views out over the water and offers a useful coffee stop by the water at Clontarf.

Picking up the route from Balmoral was a bit of a bore, since I soon had to turn away from the coast and trudge uphill, then wind my way through suburban streets. A little bit of bushy track down to Chinaman’s Beach was a welcome break from the bitumen-bashing and after that the Spit Bridge was within, well, spitting distance.

Past the bridge and around the corner, things became considerably nicer. Fisher Bay and Sandy Bay led me to Clontarf and the aforementioned coffee stop. There was not even an extra charge for an extra shot in a large flat white.

Around the depths of Balgowlah Heights a track winds up into Sydney Harbour National Park, at Grotto Point suddenly opening out onto an area of Aboriginal rock art.

Aboriginal rock art at Grotto Point. Explanation is below... 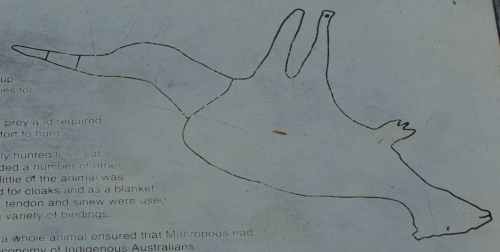 It's a kangaroo or wallaby, standing on its head from this angle.

Around Dobroyd Point there are brilliant views across to the heads, with the Pacific Ocean beyond. That’s one of the views in the photo at the head of this post.

At high tide, there’d be more of that road-slogging needed to get around to Manly, but at the time I was there it was possible to rock-hop around the points.

I could have continued up onto North Head, but there’s enough up there to explore another day. I particularly want to have a look at the former Quarantine Station, now converted to holiday apartments which visitors can share with smallpox-ridden ghosts.

For now, the ferry is waiting…

Sir, your ferry is ready for boarding. 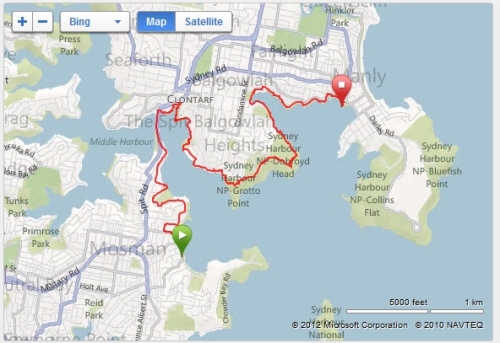 The route from Balmoral to Manly.

Coming up – the final stage – Manly to North Head.