‘He’s called a mata-mata and he’s come all the way from South America.’

‘Why?’ The five year old of our family is very interested in animals.

The zoo keeper holding the strange-looking turtle is pleased to have an excited customer. ‘He was a present from an American zoo to our Taronga Zoo here in Australia.’

‘When is he going back home?’

‘Does he miss his mummy?’ 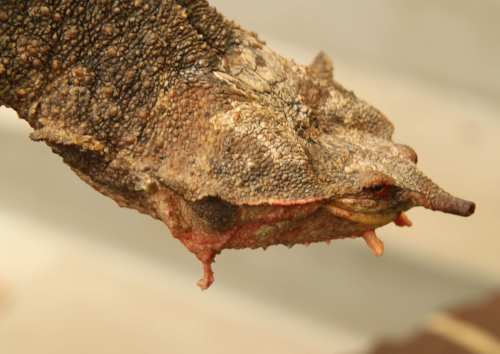 It's hard to say he looks happy, but he does look interesting.

Mevrouw T and I have been regular visitors at Sydney’s Taronga Zoo and thought it worth our while becoming Zoo Friends ($110 adult, $260 family).

When we bring the younger family members, we always spend a lot of time at the reptile and amphibian house. The big cats, giraffes and elephants may be more spectacular, but you can’t get as close to them as you can with the amphibians. It costs money to be photographed with a koala, but you can touch a tortoise for nothing. And the reptile house is just inside the top entrance, on the right.

I like amphibians too. They sit still while you adjust the camera settings. This is a green and golden bell frog - a 'vulnerable' Australian species.

‘Oh look, there’s a lizard in there,’ says a lady, spotting a small reptile in the alligators’ enclosure.

The five year old quickly points out her error. ‘It’s not a lizard, it’s a water dragon.’ (We saw one near the Parramatta River recently.) ‘But it hasn’t got wings,’ he adds. 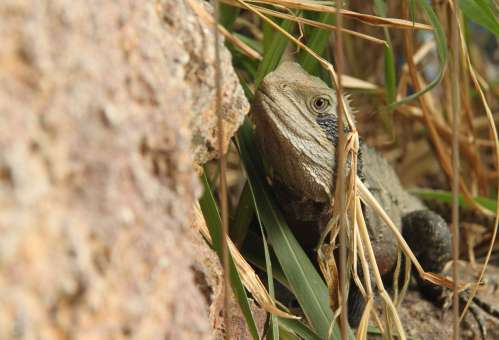 Eastern Water Dragon. Locked in the alligator's cage, he may wish he did have wings.

The zoo is not large, and on a rather cramped site, though a spectacular one, overlooking Sydney Harbour. 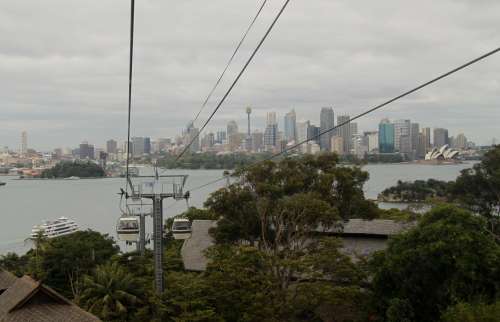 We always start our visit with a ride up from the ferry on the Skytrain. Does any other zoo in the world have a view like this?

Wisely, the zoo has opted to have less different kinds of animals on display, while giving the ones they have better facilities. The serious breeding program goes on at Western Plains Zoo, the open range zoo at Dubbo in the west of the state. A visit there is recommended too, if you’re out that way.

Taronga’s modern enclosures, with no bars, let the chimpanzees and gorillas roam freely on grass and climb on their play equipment, separated from visitors only by a moat.

Get involved with no evil, eat no evil, get bitten by no evil.

Three new Sumatran tiger clubs are on display between ten and two daily.

My photo of the tiger cubs. Maybe those in the front got better ones, but I'm not so sure about that.

The bears are nowhere to be seen. Bears are always sleeping when we come past.

‘Why?’ asks the five year old.

A volunteer has a bear skin on display, however, and lets the children feel it.

‘He was a real bear, until he died. His name was Barney.’

Oh. I find this a bit creepy. I remember Barney, the giant kodiak bear who was a zoo favourite for years. I don’t think I want to feel the claws I’ve seen ripping into a fish in an iceblock.

‘Has Barney gone to heaven?’

The volunteer smiles, ‘I think so.’

‘Then why is his skin still here?’

‘Come on,’ I say, ‘Let’s go and see the elephants doing their show.’

That’s popular too, so much so that the children have to crawl between adult legs to get a spot at the front. The keeper doing the commentary tells us that most of the Taronga elephants have been rescued from Thailand where they are no longer used for logging. They and their handlers are forced to work in shows for tourists. These Taronga elephants love doing their show, playing football and performing balancing feats.

The commentary may be a little stilted, but the elephants seem to enjoy their work.

A few minutes is enough for the younger family members. They still have a lot of questions, though they’ve switched topics:

The thing about turtles is that they don't mind you coming close to them.

Taronga Zoo’s entrance price is $44 for adults, and $112 for a family of two adults and two children.