Nobody should accuse this blog of unbalanced journalism. I’ve just ranted about what a depressing place Australia has become, so now here I am giving it a rave review.

There are good things about this country which we human residents can take no credit for – the landscape, the wildlife and the weather. The first two we’ve had a good crack at abolishing, and when climate change seriously kicks in we may find we’ve even stuffed up the weather too.

Nevertheless, when I get back to Australia after some time away, I find there is plenty to love about life here. I only wish people would value it more. 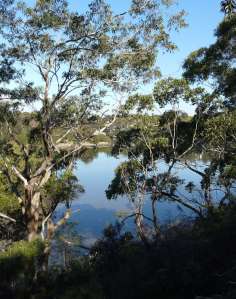 Thanks to Sydney sandstone being rocky and hard to build on, we still have some really nice places left. Are there any other big cities with this sort of nature right through their suburbs?

The Australian bush may be an acquired taste. It can seem harsh, prickly and colourless. To visitors, eucalyptus trees seem too big for the amount of foliage they carry, and their patchy trunks and peeling bark make them look damaged.

I acquired the taste for the look and smell of Australian landscape long ago, and I love it.

These pelicans are paddling on the Cooks River, just down the hill from our place.

When I wake in the morning to a chorus of inner-suburban birdsong, I realise what I’ve been missing while in Europe.

They have birds there too, but no rainbow lorikeets getting noisily drunk on bottlebrush nectar, and no wattlebirds or carolling currawongs. There are no pelicans gliding along the Amsterdam canals.

Maybe we don’t need so many Indian mynahs and feral pigeons, but we’re supposed to be a nation that welcomes immigrants.

A fine cappuccino from an unpretentious cafe.

Naturally it’s found where Italian migrants introduced it to Carlton in Melbourne and Leichhardt in Sydney, but it’s now also possible to get a perfectly acceptable heart-starter in almost any cafe in the country.

The cost is creeping up – $3.50 has become usual in Sydney, but I don’t mind paying that if the quality is there.

Okay, maybe it doesn’t deserve to be on the front pages of the papers quite so often, but I do like Australian Rules Football. It’s fast-moving, spectacular and caters for a range of physiques (though every player in the modern game needs to have extraordinary agility and fitness).

The crowd atmosphere is excellent too – passionate but friendly. You can safely sit next to fans screaming their heads off for one team, and there’s no chance they’ll want to bash your head in if you express vocal support for the opposition. European football fans could learn something from an AFL crowd.

The footy season has just finished for this year, but not to worry – the cricket is coming.

Few tourists would come to Australia for an artistic experience. If you want theatre, go to London or New York. If you’re looking for famous paintings, go to Paris or Amsterdam. Yet in the short time we’ve been back here we’ve seen some excellent theatre (not all of which I’ve been involved in), enjoyed the Sydney Children’s Festival and note that the new Australian film Red Dog is doing great business.

What I like about the best of Australian art is that while skilful and serious it also has an energy, lack of pretension and determination to connect with the audience which is often lacking in theatre we see in the Europe.

Australians, you’ve never had it so good, you don’t know how lucky you are, and you wouldn’t be dead for quids.

5 responses to “REASONS TO LOVE AUSTRALIA”