Fortunately this is not our boat.

Kayaking at night seemed a strange activity. Wouldn’t it be pointless to paddle around beautiful surroundings in pitch darkness? ‘Oh no,’ the girl in the Skibbereen Visitors Centre assured me, ‘It’s wonderful! Out there on the water, under the stars. On a clear night.’ I glanced through the window to the street, where people were scuttling for cover as the leaden Irish sky unleashed another shower.

By 7.00pm the rain was clearing, though the evening mist was rolling in as I drove around the water at Union Hall. I stopped to take a few shots; this would probably be my last photo op of the evening. Kayaking and photography don’t sit well together. I’ve tried it once before, in New Zealand, without great success. There’s barely room for my body in that little hole on top of a kayak, and none for a camera. Once I was wedged in and pitching in wind and waves I couldn’t hold the camera steady anyway.

Union Hall. Grey and misty, but at least the water is calm.

I drove on through bushland, following the signs to the designated meeting point on the Castlehaven Inlet.

There was just enough light left to photograph the kayaks. They looked fairly stable, but I hadn't got into one yet.

Kayaking guide Declan rolled up in his car and I introduced myself.

‘Have you been in kayaks before, Richard?’ asked Declan.

‘Only once, in New Zealand.’ I’d paddled for a few hours out from the Coromandel Peninsula.

‘Why is it that everyone who’s ever been in a sea kayak has done it in New Zealand?’he asked.

There are lots of things I’ve done once and only ever done in New Zealand; caving, canoeing, abseiling, eating feijoa ice-cream, sharing a hostel dormitory with a rugby team…

It was getting seriously dark when local couple Joe and Jane arrived to join us for a paddle. ‘We’re not very experienced,’ Jane said quickly, ‘We’ve only ever kayaked once. In Australia.’

Declan strapped us into overalls, rubber skirts and lifejackets -‘Which you won’t need, because you’re not even going to get your feet wet’. He gave us a quick refresher course in paddling, and explained what to do if the kayak capsized. ‘Which it won’t!’ he hastened to add.

We pushed off. The sky darkened. The rain fell. ‘Kayaking is one of the best things to do in the rain,’ said Declan cheerily.

The rain stopped. The sea was calm, and although there was no starlit sky, the lights of Castletownshend beckoned. Declan regaled us with tales of the town and its restored B&B by the water, ‘Sort of shabby chic, but without the chic.’ I’ve stayed in lots of places like that.

It was too dark to see anything but the looming shapes of moored boats. ‘There’s a beautiful beach just over there,’said Declan, and we took his word for it.

We were establishing a steady paddling rhythm in the calm water, and as it became clear we weren’t going to need Declan’s emergency capsizing procedure, I relaxed. The phosphorescence began to appear. Bioluminescence actually, I later discovered. Every dip of the paddles brought flashes of blue light just below the surface. Plankton cause it, Declan explained. When disturbed, they think they’re under attack, so they make the light to attract larger predators to scare their attackers away. ‘Or so I’m told. I’m not a marine biologist.’ I didn’t really care why they did it. It wasn’t too important to me to get inside the plankton brain, but the effect was extraordinary and the paddling was becoming more and more pleasant.

Two hours slipped past as we chatted about life and work, the economic ills of Ireland and the solutions to the world’s problems, pausing occasionally to drift on the gentle swell and feel the silence and the solitude.

It had turned out to be an unforgettable evening, unlike anything I’d done before. Thanks, Declan. 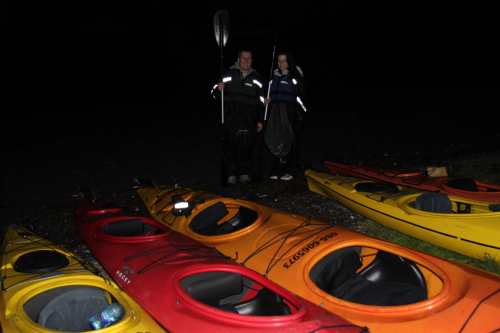 The writer was the guest of Failte Ireland and Atlantic Sea Kayaks.

5 responses to “SPLASH IN THE DARK – West Cork sea kayaks”