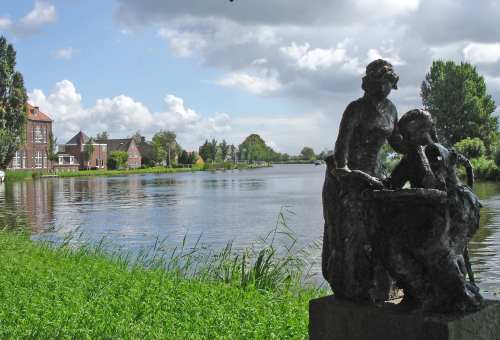 Out past the village of Nes aan de Amstel. The 18th century writers Betje Wolff and Aagje Degen, depicted in this little sculpture by Hans Bayens

Cows, dykes, windmills, Rembrandt, locks, churches, appeltaart, a Spinoza connection (no, that’s not a European group-set brand) and roads with no potholes – a perfect little cycling loop out of Amsterdam.

The Ronde Hoep is the largest road-free area of polder in the West Netherlands. Drained 1000 years ago, the wheel-shaped pattern of canals and dykes is still visible. 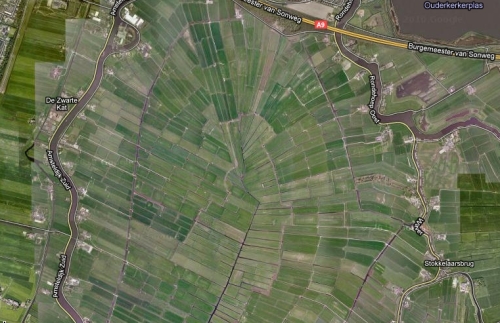 The results of a thousand years of digging and draining.

From central Amsterdam, head out through the Vondelpark, turn left at the Schinkel canal and follow the signs to ‘Amsterdamse Bos’ (woods), the recreation area of forest, lakes and sporting fields which is Amsterdam’s largest playground.

Amsterdamse Bos - many kilometres of car-free paths for cycling, walking and horse-riding.

Head east from here for a few kilometres and one way or another you’ll find yourself at the Amstel River. 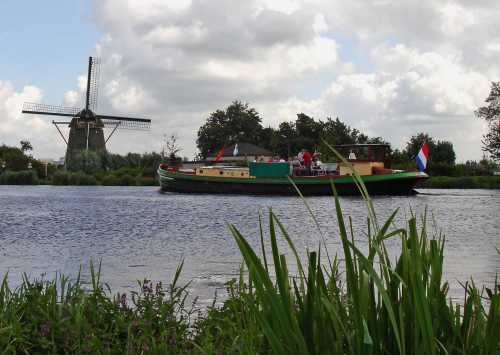 Amstel River: 'Amsterdam' = 'dam on the Amstel'. Of course you'll want to take a windmill photo.

My friend Ward is an artist himself, so he's well qualified to give Rembrandt a few pointers.

A Rembrandt Walk out of town and along the river is being set out.

The master painter, formerly the most famous Amsterdammer until first van Gogh and then Johan Cruyff took over, used to enjoy walking and sketching here himself.

Heading south along the river, you’ll reach the village of Ouderkerk aan the Amstel (the Old Church on the Amstel). It’s worth a stop to have a look at the Jewish Portuguese cemetery, where the parents of my favourite philosopher Baruch Spinoza lie buried.

When they were evicted from Spain and Portugal in 1492, many Jews fled north to Belgium and Holland. I like the symbolism on this grave.

On the outskirts of Ouderkerk the Ronde Hoep begins – about a 20km loop along the Amstel and Waver Rivers and back to Ouderkerk again.

I promised you cows, didn't I?

The Ronde Hoep route has been one of my favourite rides over the past few years. It’s flat, it’s quiet, and it’s always interesting.

Here’s the map of my route. For inzoomable map with more detail, including my maximum speed, the calories I used, and generally more info than you will ever need, click here.