LOST IN LUCCA – what to do? 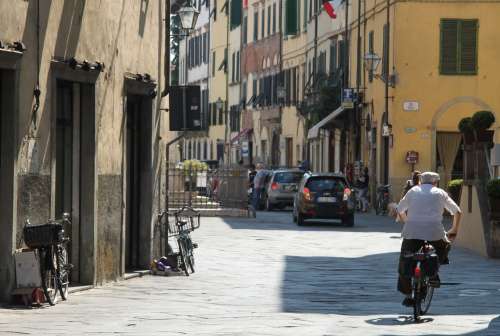 Somewhere in Lucca. Don't ask me where - a lot of it looks like this.

I had the impression people feel a little lost in Lucca, in more ways than one.

The week before we came here, the BBC screened an episode of Top Gear, the motoring program which we never watch except this time, featuring a stunt set in Lucca.

Lucca's Roman Amfiteatro. The Romans have gone, and the apartments shut out any chance of a cooling breeze.

The task was to drive out of the town. Much merriment followed as they tried to squeeze their hatchbacks down ridiculously narrow alleys without losing the wing mirrors, attempting to navigate out of the maze.

Inconvenienced locals quickly became charmed by the hilarious Englishmen, when they realised they were Famous Television Celebrities.

Forewarned, we parked our rented hatchback (a Fiat Panda – 0-30kph in 37 seconds with me driving) outside the city wall and entered the puzzle on foot.

We liked this statue of Puccini, near the house where he was born (which we failed to find).

Within minutes we were lost in the winding alleys too.

We chanced upon the church where Puccini used to play the organ. But when the same pillar with the same statue on top appeared in front of us the third time we were telling each other ‘this is where we came in’ and wondering if there were important things to do in Lucca that we were missing.

There was little use asking directions – we had no idea what we were trying to find anyway.

Lucca is on lists of Top Ten Towns in Italy, but it has no world famous museums, works of art, or must see icons for visitors to tick off.

There are three obvious things to do: (1) walk or ride a bike around the 4km walled perimeter (2) take a photo of your companion posing in front of the duomo and (3) climb the tower with the trees on top and take a shot of Lucca’s rooftops. 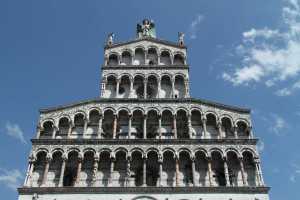 The duomo. More interesting on the outside.

You can comfortably do all three in less than an hour, which leaves visitors with most of the day to fill in.

The gleaming white duomo is indeed impressive on the outside, though a few minutes in the sober grey interior was enough for us.

With some difficulty and the help of an inadequate free map we found the Palazzo Pfanner. Entrance EUR4.50.

Apart from an elderly French couple, we were the only visitors. It was indeed a pleasant oasis, though like much of Lucca, the outside (the garden) was more interesting than the few refurnished rooms on the inside. 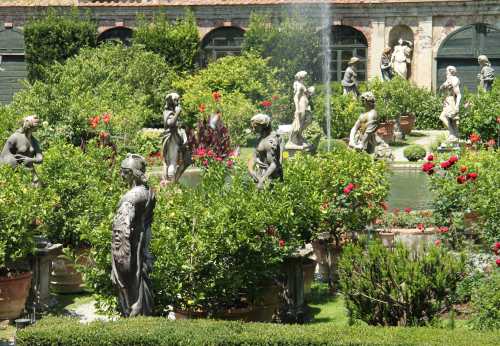 The garden of the Palazzo Pfanner. Ah, this is more like it - water and shade!

After sitting in the shade for half an hour, we realised we’d found the answer to enjoying Lucca.

Forget about the maps and the guidebook. Don’t worry about getting anywhere in particular, just stroll, admire the little details of the architecture, sit on a terrace, drink caffe and watch the passing stream of locals and tourists.

We possibly missed some fabulous things but we didn’t mind. Lovely Lucca had earned its place on our Top Italian Cities list.

The bike is the way to get around Lucca. We would have rented them ourselves, if we'd found the bike shop.

Washing drying in the street - this must be the real Italy.

Not much going on here, but who cares?