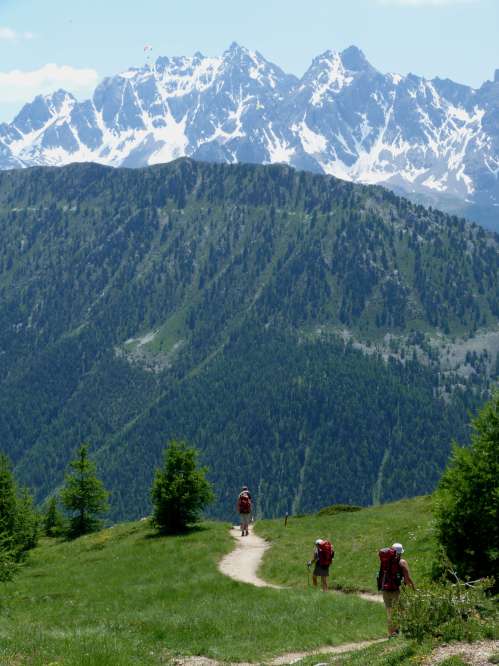 An easy section. But it looks like there are tougher bits up ahead.

I don’t normally have jam on my morning baguette, but in the mountains you take all the calories you are offered. I’ve paid for them and by golly I’m going to use them.

We’re hiking the GR5, one of the French Grand Randonnees (Great Hikes), a classic long distance route that officially begins in Belgium and ends in Nice, on the way passing through Luxembourg, the hills of the Jura and the mighty French Alps.

This week’s stage is from Briancon to Barcelonnette, 109.78 kilometres according to my trusty Garmin GPS, with 6,524 vertical metres to climb along the way.

We’re a few days into it, our muscles a little harder, so today’s 13km stage from Ceillac to Maljasset should hold few terrors, though navigator and map reader Klamie warns it includes a solid thousand metre climb over the 2700m Col Girardin. 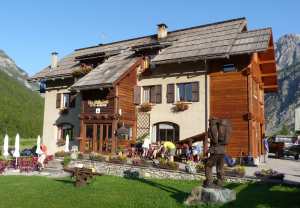 Packing the rucksacks at les Baladins (the Hikers) Auberge.

After the aforementioned bread and jam breakfast in the Gite-Auberge Baladins in Ceillac we make a quick trip to the boulangerie, and add a couple of baguettes to the fromage and saucissons in our backpacks.

My rule for buying French sausage is to pick the ugliest, most misshapen specimen available. If it doesn’t taste good I can at least pride myself on being a daring gourmand francais.

The sign directing us off the road and up the steep GR5 trail reads ‘Lac Miroir 2h, Col Girardin 4.5h’. ‘H’ is ‘heures’.

The GR5 is generally well signposted and easy to follow, with little red and white markers stencilled on rocks and trees every few hundred metres. But we occasionally stray from the path, accidentally or to take a short-cut, so it’s advisable to carry a map and guidebook. 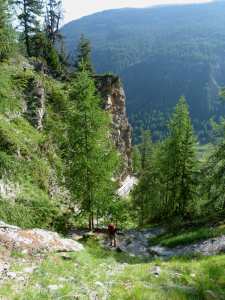 For a brief moment I'm able to look down on Edwin.

It’s a steep climb, through pine forest broken occasionally by rocky outcrops and waterfalls, and clusters of pink azaleas.

As one by one we stop to catch our breath, in my case under the guise of needing to take a photo, the group strings out into its customary formation, Bert and Edwin (the youngest and the skinniest) leading, the rest of us trailing behind.

It’s a six hundred metre uphill slog, but the forest is beautiful, and when the track emerges at the promised Lac Miroir, the ‘Mirror Lake’, it has been worth the effort. 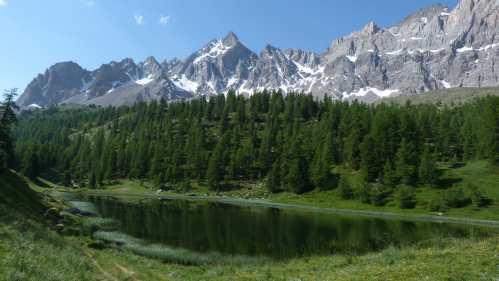 This is it, Lac Miroir. Worth climbing an hour and half to see.

It’s still early in the day, but I need to get rid of some French sausage and Bert needs to lighten the packet of Dutch stroopwafels he’s carried since leaving Amsterdam. 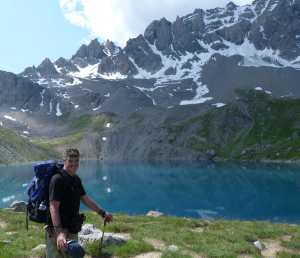 So we eat an early lunch while we wait for the rest of the party to filter in, then head on over the hill and up another two hundred metre climb to Lac Sainte Anne. That’s worth coming here for as well.

From Lac Ste Anne the real work begins. The steep slope up to Col Girardin is covered in loose glacial moraine, inclined to slip treacherously away under our feet, even on a perfect fine day.

It’s probably not as dangerous as it feels, but in places I have to force myself to watch the track and not the drop.

Once on top we eat lunch again. Lunch 1 was sausage and stroopwafels, so we make Lunch 2 stroopwafels and sausage. Strange that we can do all that walking and not lose weight. 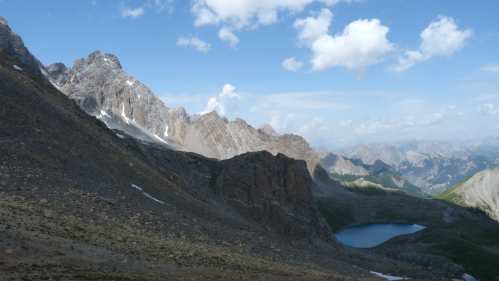 The view from Col Girardin, Lac Sainte Anne far below.

From the Col we roll down the hill. For my ageing knees, going down is only marginally easier than going up, though the rest of my body marginally prefers descending; it doesn’t make you as thirsty on a hot day with too much salty sausage in your bloodstream. 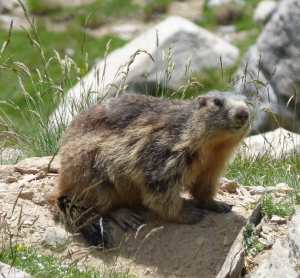 Marmots won't usually let you get close to them, but my camera has a long lens.

Entertainment on the way down is provided by spotting marmots.

These rodents (someone’s going to tell me they’re not really rodents) look like a cross between a beaver and a prairie dog, with the meerkat-like habit of mounting guard, then whistling and diving into their burrows.

It takes a good two hours to pick our way down the rocky slope to Maljasset, a village of wood and stone, where our accommodation supervisor Marga has arranged for us to spend the night. 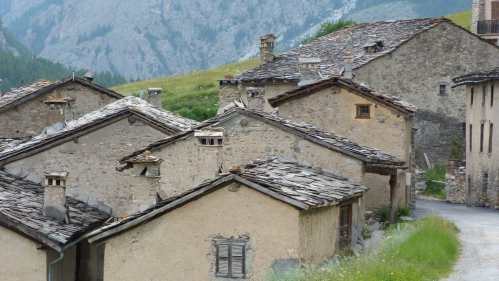 One of these houses has beds and beer waiting for us. 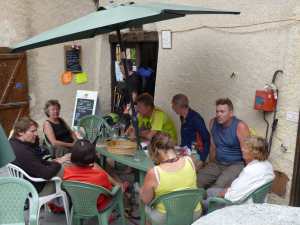 The sign over the entrance, made from old horseshoes, says ‘CAF’. It’s not that someone has stolen the ‘E’; this is an auberge of the Club Alpin Francais.

And oui naturellement, monsieur, they do have beer.

Maljasset’s mysteriously named Church of Saint Antoine of the Desert provides a final photo opportunity for the day.

Thanks to the late sun breaking through the clouds, the lighting is perfect. 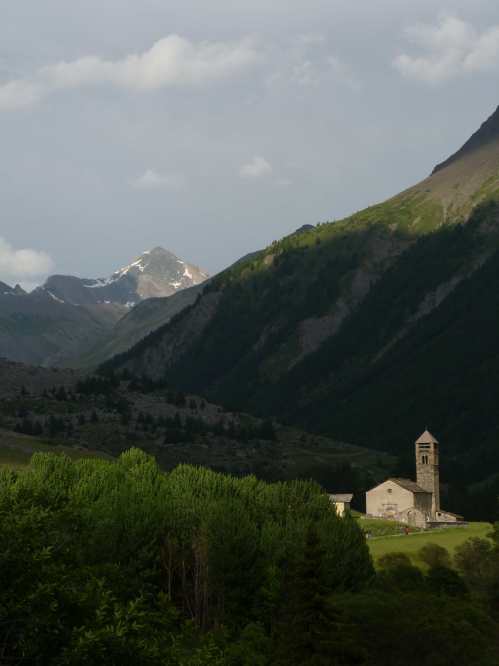 Getting there: There are train stations along the GR5 at Modane and Briancon. Other towns (including Ceillac, Larche and Barcelonnette) have bus services.

Staying there: There are numerous gites and refuges along the GR5, as well as small hotels in some towns. Cost is about 35-40 euros a night for demi-pension (bed, dinner and breakfast). Alcohol is extra!

Route description: www.grfive.com has a good English description of the route and the GR5 experience.