Yes, I know. These are grey geese, not ducks.

Mevrouw T has been doing a short architecture course, and knows a lot about W.M. Dudok, the Dutch architect whose masterpieces are on display in Hilversum, the prosperous ‘Media Town’ which produces most of the Dutch radio and television.

It’s an easy ride from Amsterdam, when the wind is at your back.

I’m getting tired of the few kilometres riding through the built-up areas on Amsterdam’s outskirts. No problem; we saved ourselves an hour and 15km by putting the bikes on the train and taking them to Abcoude.

Abcoude is a pleasant enough village at any time, but it’s also the gateway to one of my favourite stretches of road, the narrow, winding path beside Het Gein river.

Het Gein river on the fringe of Abcoude.

On a fine spring day with the wind in the willows, yellow iris blooming wild by the water’s edge, restored windmills and old farmhouses, and cars that move over and give way to bikes, is there a nicer cycling path anywhere?

Weesp - one of my favourite Dutch villages

This part of Holland is blessed with a number of beautifully preserved villages. We stopped by the canal in Weesp for koffie and a ‘Weesper mop’, a small, soft, sugary cookie.

In Muiden we watched old boats pass through the lock in front of the Muiderport Castle, and finally ate a picnic lunch in front of the Town Hall in the walled fort of Naarden.

Then we rode to Hilversum. 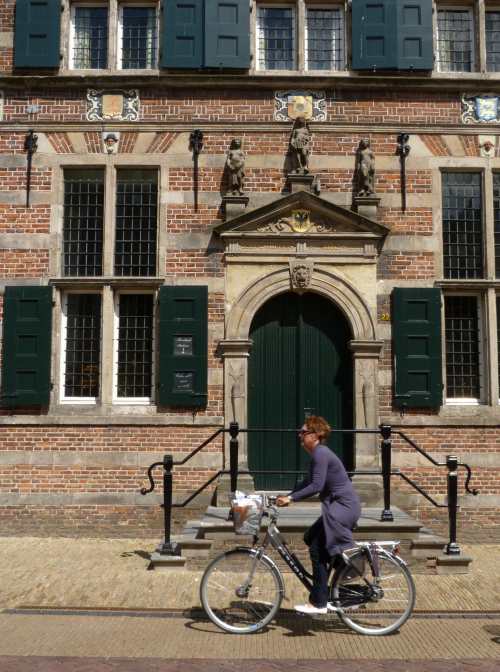 …it was only to be expected that there would be controversy when in 1924, Mr Dudok came up with this design for Hilversum’s Raadhuis.

Dudok's Raadhuis was well ahead of its time, but is now Hilversum's pride and joy.

Nor was Dudok limited to grand designs. As well as numerous schools and private homes in Hilversum, he also designed this modest pumphouse, which squirts water into an ornamental lake to keep Hilversum dry.

The entrance to Dudok's Athletic Stadium.

We found plenty to interest us for a day in Hilversum, even leaving a visit to the Museum of Image and Sound for a return trip.

When we’d had enough of Dudok, we rode on past the ducks, the geese, more windmills…

This windmill is known as 'de Trouwe Wachter' (the faithful guard), since during German occupation of the Netherlands in WWII, the miller used to warn of approaching German soldiers by the way he set the sails.

…and caught the train back to Amsterdam from Utrecht.

Hotel Ravel, Hilversum has double rooms from EUR95 per night.

Train from Amsterdam to Hilversum takes 21-33 minutes and costs EUR5.20.

5 responses to “HILVERSUM, NEDERLAND – cycling round ducks and Dudok”