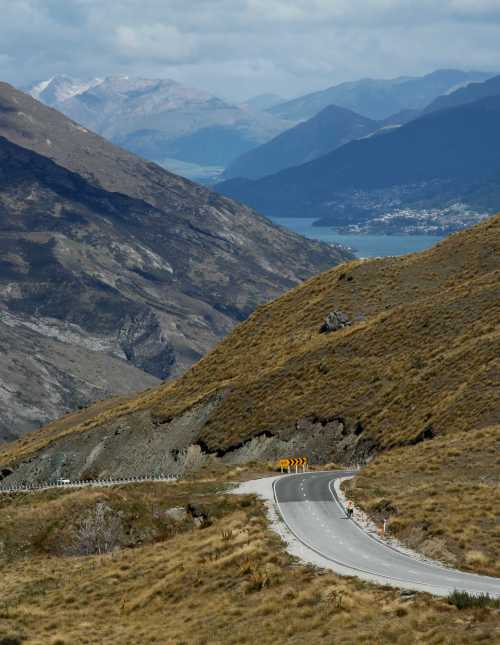 It's hard to imagine a more beautiful country to cycle in, or a hillier one. Hugo was the only one of us who made it up the Crown Range under his own steam. I had to take the sag wagon...so I could be there at the top to take this shot.

So here we go, on a six-day cycling tour of New Zealand’s lovely South Island.

Seven riders, two guides, several hundred kilometres (I’ll tell you the exact figure when it’s all over), lots of hills, one van for carrying gear, and us too if things get really grim, wind and sandflies guaranteed, rain forecast.

We’re from Australia, New Zealand, Northern Ireland, Hong Kong via South Africa and Peru. The planned route is roughly from Queenstown up to Wanaka, then out to the West Coast and north past the Fox and Franz Josef glaciers, then back inland towards Christchurch.

Here’s the report on Day One…so far so very good!

The road out of Queenstown ‘undulated’, which is cyclist-speak for ‘was hilly’. 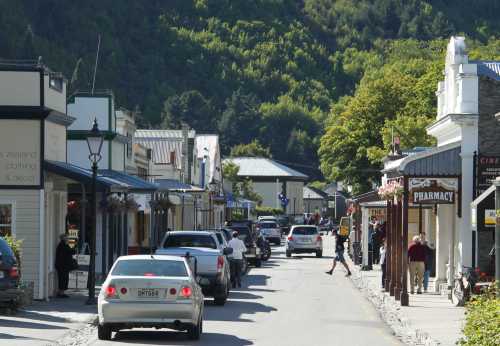 The gold has run out in Arrowtown, but the tourists have run in.

It is a very attractive place all the same. I spent some time in the former Chinese settlement, where the sites of Tin Pan and Ah Gum’s huts are remembered and other huts restored. The Chinese were invited but not welcomed into New Zealand in the 1860-80’s.

Some of the Chinese miners' huts have been preserved.

Only the hard men attempted the climb up up the 1100m Crown Range, and only one of them made it to the top with the bike. I dips me lid to all of them, particularly Hugo.

The wind was predicted to be ‘predominantly from the north’, cyclist-speak for ‘howling gale blowing straight into our faces for the next 40km’. It was pedalling downhill all the way, despite the big descent to our lunch spot at Cardrona.

Cardrona Hotel may not be much to look at, but it does a mean flat white and chicken salad.

Onwards and downwards we rode towards Wanaka, into the teeth of that howling gale – I tried to photograph it, but it was hard to see the wind. You had to be there.

My shot of this windsurfer coming to grief on Lake Wanaka is the best impression I can give of the hurricane we rode into.

Tomorrow is another day…rainforest and rain as we head for Haast.

I’ll send more reports from the road from time to time…stay tuned.

The writer was the guest of Adventure South.