Waitakere coastline - the orcas will be here in a tick.

Your time in Kiwiland is limited? Try a tramp in the hills just outside Auckland. Sweet as, bro!

Charles* was a traveller in a hurry; not an ideal trait in a tramper, it must be said. The Swiss banker had a four-week break from stuffing people’s cash into secret vaults, and was squeezing in a quick round-the-world trip. He’d just flown into Auckland from South America, and had another plane to catch that afternoon.

Nevertheless, he didn’t want to miss the famed NZ natural beauty, so Charles engaged guide Neill Sperath to show him some. Neill’s company is called ‘Time Unlimited‘, but he’s prepared to get a wriggle on if necessary. ‘T-I-M-E’ is an acronym for ‘To Integrate Maori Experiences’. Neill is German/Irish, his wife Ceillhe is Maori and together they run hiking, fishing and Maori culture tours in and around Auckland.

I could squeeze in a quick tramp too, so I was invited to tag along on their expedition into the Waitakere Ranges, less than half an hour’s drive from the centre of town. The Waitakeres are convenient, spectacular and perfect for trampers in a hurry.

‘How much walking do you guys feel like doing today?’ asked Neill.

‘Oh, as much as we can fit in,’ I said enthusiastically, given the early hour, ‘but I’m happy to do whatever Charles would like to do.’

‘To be honest,’ said Charles, lighting a fag, ‘I do not really like to walk at all.’

This was going to be an interesting trip.

We collected provisions and heart-starting coffees at pretty Titirangi village, then headed for the hills.

At the gateway to the regional park, in the Arataki Visitor Centre a short film filled us in on the history of the Waitakere Ranges. Volcanic activity 20 million years ago pushed these mountains up out of the sea. They’ve weathered somewhat since then, but they’re still new in geological time, which means they’re still pointy, rough and spectacular. 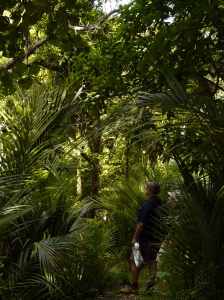 Up there you can see the tuis...there, just behind that...oh, they're gone.

The giant kauri trees were felled for their hard, straight wood, then hauled out by bullock teams…That was all we had time for; we had to get walking.

It was a gentle stroll through dense forest of nikau palms and pohutukawa (Neill knew the real name; I always called them ‘New Zealand Christmas trees’).

‘Hear that sound?’ said Neill, ‘Those birds love feasting in the canopy. Tuis.’

‘My favourite New Zealand birds,’ I said. True. I like their musical calls, and their handsome dark blue glossy feathers, with two distinctive white plumes, hanging like wattles below their chins.

‘Do you see them, Charles?’ asked Neill.

The trail emerged from the forest and climbed through heathland, overlooking cliffs, outcrops and black sand beaches.

Remember that wild remote beach in Jane Campion’s film The Piano? The one where seamen lug a piano across the black sand, with surf crashing behind them and rocky cliffs and dense rainforest on the slopes around them? That beach is called Karekare and there it was below us. The Waitakere beaches are as good as any I’ve seen in the wild South Island, though perhaps not ideal places for leaving a piano below the high tide mark.

The Waitakere Ranges comprise 16,000 hectares of subtropical rainforest crisscrossed by 250 kilometres of walking tracks. A new 80km route, named the Hillary Trail after the Kiwis’ most famous hiker, opened last year. It isn’t Mt Everest, but it is beautiful, and far less busy than Everest was last time I was there. We didn’t meet any other trampers.

Charles seemed content to take a breather (and a gasper) at our lunch spot while Neill led me up the hill to the highest cliffs in the area, with stunning views up the coast. ‘We sometimes see orcas here,’ said Neill, though they must have been on their lunch break too. Never mind, the views alone were good enough.

‘Well, time to go,’ said Neill, and down we trotted, picked up our companion, and looped back through the forest to the car. Then we drove a short distance to lean against a stand of mighty kauri trees.

The verdict? The Waitakares are well worth the quick trip if time is limited. If time were not so limited, I’d happily spend more of it there.

‘Yes,’ said Charles. And he was still able to catch his afternoon flight to Namibia.

Thanks, Neill – that must have been a tricky little job for you, but you did it well.

The writer was a guest of Time Unlimited.

Karekare Beach, the world's worst place to park a piano.

How to get there: "A" marks the spot