JUST HOW DANGEROUS IS A SHARK? – Sydney Maritime Museum 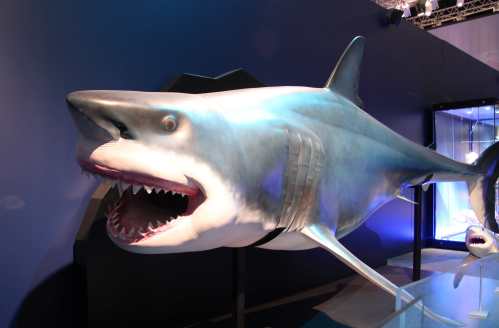 We’re trying to broaden the grandchildren’s interests from tyrannosaurus rexes to other creatures with big teeth, so we took them to the shark exhibition at Sydney’s Maritime Museum. They liked the life-like models, the films, the photos of bloody flesh torn from soft pink bodies, the skulls with rows of fangs…

Meanwhile my attention was caught by film footage of terrified swimmers scooting out of the water, fleeing from a gently drifting toaster. The caption read: People killed last year by faulty toasters – 791. People killed by sharks – 4. The film went on to compare annual deaths caused by chairs (652) and kites (about 370 if memory serves) with those 4 shark-related ones.

The information plaque informed me that 20 Americans were attacked and injured by sharks in a given year, while nearly 44,000 were injured by toilets. Even allowing for the likelihood that most of us visit the toilet more often than we swim outside the shark nets, the stats are damning against the fearsome porcelain unit with the heavy seat which can flop down without warning. And don’t get me started on the dangers of those fancy models with built-in electrical heating and jets of hot water directed from below.

While those sharks are killing about 4 members of our species each year, we’re killing some 78 million of them, mostly for shark fin soup. Fins from large sharks contain mercury levels dangerous to children and pregnant women, and very little other nutrition. Claims for the medicinal properties of sharks’ fins are unproven.

Visitors to Australia take note. You can swim with little fear in the sea which girts our land, but when the toilet siren sounds the alarm, get out of the bathroom fast!

For more information on the exhibition and on the place of sharks in the world, click here.

2 responses to “JUST HOW DANGEROUS IS A SHARK? – Sydney Maritime Museum”