SNOW ON MARS – for one week only

My play Snow on Mars opened last night. I’ll leave the serious reviewing to others, but thanks to the audience who came, laughed, gasped and applauded, and to Gale Edwards (director) Kim Carpenter (producer/designer) and the fabulous hard-working cast and crew from Theatre of Image. No-one can say it’s not a wonderful production to look at. 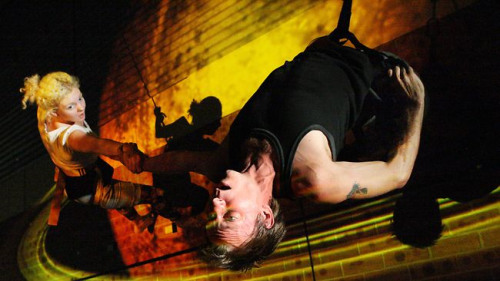 Waylon hitches a ride with the Ghost Astronaut (Dean Cross)

Dean Cross and Rick Everett show what good core strength training can do for a physical performer.

It never fails to excite me, watching a scene taken from the bare bones of a script, through the hard, sweaty work of the rehearsal room...

Thanks too Jamie Williams and Branco Gaica for the photos.

Snow on Mars runs in the Seymour Centre, York Theatre as part of the Sydney Festival until January 16. Bring the kids, and see it if you can!

STOP PRESS: Reviews for the show are out and they’re terrific! Here are the ones from the Daily Telegraph and The Australian.

Phew! Of course we pay no attention to reviews (unless they say nice things; then they’re written by geniuses who really know their stuff), but after all that work by all those people over all that time, it’s a relief to find that we’re loved and appreciated!

Naturally arts awards and all those ceremonies, acceptance speeches and trophies are meaningless sideshows…unless we win!

9 responses to “SNOW ON MARS – for one week only”