I discovered a new candidate for Best Short Hike in the Blue Mountains last weekend. It’s got the lot – waterfalls, forest, cliffs, views across the Jamieson Valley, plenty of birds and an antechinus (a marsupial bush rat) running up my mate’s trouser leg.

The route is roughly: Wentworth Falls Conservation Hut, Wentworth Pass, Slack’s Stairs, then back along National Pass to the Conservation Hut. It’s about 5km horizontally, 400m vertically and it took two old blokes 3.5 hours including lunch.

I’m often looking for a good hike for visitors to Sydney. I usually drive them up to Katoomba, and let them take a quick photo of the famous Three Sisters from the Echo Point lookout. It’s spectacular on a good day, but the busloads of tourists quickly take the edge off the event. 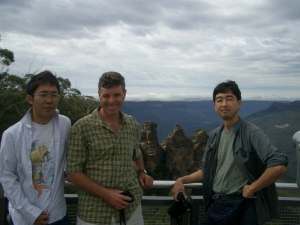 The trouble with the Blue Mountains for the uninitiated is that they don’t seem very mountainous, and usually they’re not very blue either. Bear with me here, while I explain this to RT’s LOTR readers who don’t know them…

The Blue Mountains are just an hour’s drive out of Sydney. They are only about 1000m high, and the climb up the road is so gentle that it’s unlikely to pop your eardrums. Yet they are so rugged that after the first European settlement of Sydney in 1788, it took 25 years before an official expedition managed to find a route across them and open up some new pastures. I say ‘official’ expedition because Aboriginal people had probably been crossing them for thousands of years, but those early colonists had a bit of an issue about consulting locals before setting off on a hike.

The reason these mountains are so impenetrable is that they are not so much mountains as a series of canyons. Early explorers attempting to find a way through by following river valleys always came to sheer sandstone cliffs and had to turn back. We Aussie kids learned at school that in 1813 Blaxland, Lawson and Wentworth followed the ridges and found their way to the plains beyond. Here endeth the history lesson.

There is still only one main road across the Blue Mountains, so driving up there can be a slow business. In recent years extensive, ongoing road-widening works are having an overwhelming, ongoing road-narrowing effect. It will be great when it’s finished.

But back to our walk…

Just past the village of Wentworth Falls an unobtrusive signpost to the left directs us off the highway to ‘Valley of the Waters’. It’s a promising title. A kilometre or so down this road another hidden sign points to ‘Conservation Hut’. We should be grateful for the poor signage, because what’s on offer there is every bit as spectacular as Echo Point and far less crowded. The Conservation Hut is a cafe with a brilliant view out over the Jamieson Valley. Currawongs and kookaburras hang around the balcony, hoping customers won’t finish their muffins.

From the hut tracks loop out into the Valley of the Waters, an area of streams and tumbling waterfalls. It is popular, and at weekends you share the easier trails near the cliff-tops with dozens of others. Then at the Empress Falls there’s another track leading steeply down into the valley. ‘WARNING: For experienced walkers only’ said the sign at the top. ‘What do you reckon?’ my mate Ward and I asked each other. We regard ourselves as moderately experienced hikers, but what we’ve gained in experience over the years we’ve lost in knee cartilege.

WARNING: FOR EXPERIENCED WALKERS ONLY. Would this man qualify?

‘We can always turn back if it gets too hairy,’ we decided, and down we went. The Wentworth Pass Track is certainly not as well made as the more accessible routes. It required some creek hopping and at one point between the ladders known as Slack’s Stairs, an ungainly scramble up a few metres of boulders with the aid of a knotted rope and Ward’s hand on my rear end. The rewards were a series of small but beautiful waterfalls, and a track which even on a Sunday was all but deserted. The route back along the National Pass trail which cuts across under the cliffs, has recently been upgraded, and is now mostly flat and was a much easier walk back to the hut.

Finally to our brush with nature – the antechinus story. These little rat-like marsupials are mainly nocturnal and seldom seen, so I was surprised to find this one darting along the path towards us. We stopped and watched, expecting it to dash into the bush as soon as it noticed us. Instead, it kept coming, sniffing around our feet, eventually crawling over Ward’s boots and up the leg of his trousers (on the outside, despite my suggesting to it that climbing up the inside could lead to more fun). I’ve never seen a wild Australian animal that was quite so tame.

Rat attempting to scale drainpipe. Those iphone cameras aren't quite as good as they claim to be.

Back at the Conservation Hut the National Parks ranger was at a loss to explain it. Until he added as an afterthought, ‘You didn’t give it any peanut butter, did you? They love that stuff.’ As it happened, we’d just eaten peanut butter sandwiches for lunch. The smell from the wrappers in Ward’s backpack must have been so attractive to the bush rat that it overcame the smell of Ward himself. 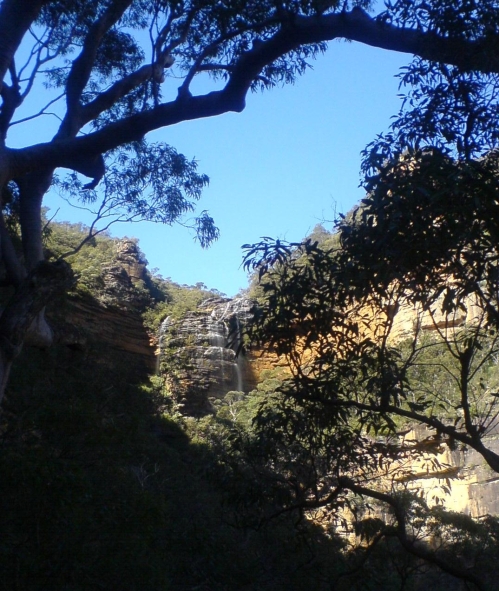 NOTES: For more details on walks in the Blue Mountains, and in other NSW national parks, see www.wildwalks.com 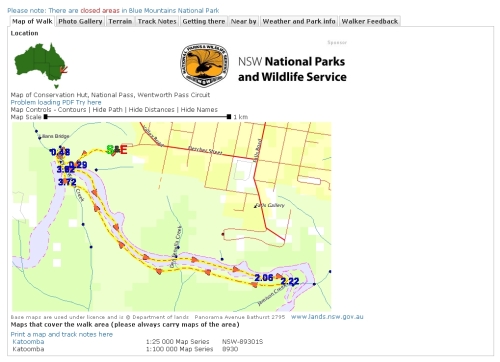 Map from http://www.wildwalks.com. Click on map for clearer image. We rebels walked the route in the opposite direction to the one indicated.