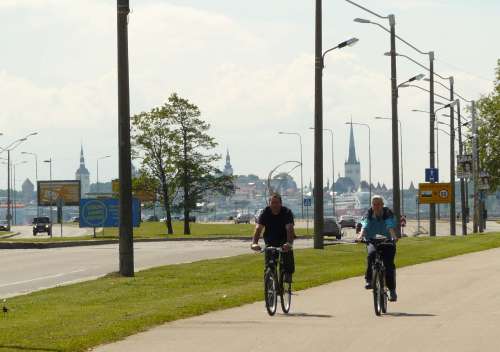 Thinking of cycling round northern Latvia and southern Estonia this summer? No, I didn’t think you were, but maybe you should put it on the ‘to-do’ list for another time.

A new 1296km cycle route, the Tour de LatEst, has just opened, and it sounds very interesting. I can’t claim to have done it myself, but in the streets of Tallinn, Estonia I recognised two heavily-laden Dutch touring bikes and got talking to their owners. Brilliant trip, they said, on quiet roads with only one car every ten minutes or so.

The route connects old villages with plenty of cheap accommodation options and sights of historical interest.

I was travelling by bus myself, from Riga to Tallinn via Sigulda and Cesis, but I noticed that through both countries cycle paths, fully separated from the road, ran beside the motorways for most of their distance.

The LatEst route is part on asphalt, part on gravel, though my informants told me this was in fine condition in good weather. It would be a bad idea to tackle the route in winter – temperatures can drop to minus 30 in Estonia. Latvia and Estonia are mostly flat – the biggest mountain in the Baltic States is less than 300m high. Both countries are heavily forested, and sprinkled with attractive lakes and farmland.

Inspired by the Dutch riders’ example, I rented a bike in Tallinn and went out for a few hours myself, just so I could say I’d done it. Most impressed by the infrastructure, and this in a land which is supposed to be struggling economically. More ‘developed’ countries could learn something from them!

For more information and cycling routes in the area, see:
http://www.vidzeme.com/eng.php?v=&id=29

Or if that isn’t challenging enough – try the EV10 – 4300km round the Baltics via St Petersburg and Scandinavia.
http://www.routeyou.com/route/view/197209/cycle-route-hansa-circuit-or-baltic-sea-cycle-route-ev10.en

4 responses to “Tour de LatEst – cycling in Latvia and Estonia”