If you’re a party animal or a bargain hunter, try to be in the Netherlands on April 30th. If you’re not, arrange to be somewhere else. Each year on Koninginnedag or ‘Queen’s Day’, it’s as if the entire Dutch nation dresses in the royal colour orange and paints the town red.

Officially Koninginnedag celebrates the queen’s birthday, though it was former queen Juliana, not present monarch Beatrix, who was born on April 30th. It doesn’t matter, because although Queen Bea probably enjoys a quiet glass of champers with her feet up at the end of the day, overwhelmingly this is a people’s party. All the city fathers do is relax laws restricting street trading for 24 hours, and the enterprising Dutch community does the rest.

On Koninginnedag it’s open slather for garage or car boot sales, there are street performers and micro-profiteers on every corner, and every cafe has an outside terrace in full swing, with live music pulling in the customers.

We start our day with an early morning trip to the world’s biggest garage sale, along Amsterdam’s wide Apollolaan (‘Apollo Lane’). Anybody with a collection of Abba vinyl, a pair of antique skis or a souvenir tribal mask from Uganda is out there trying to sell it. The Apollolaan is one of Amsterdam’s best addresses, so we expect this flea market will sell a superior class of fleas, although these days would-be merchants flock from all over town to flog stuff here.

We’re in the market for a child’s travel cot and locate one within minutes. It’s a terrific bargain, but how are we going to transport it back to our accommodation? On Koninginnedag many roads are blocked to cars and the trams are not so much running as crowd surfing, inching through the packed streets with the bells ringing constantly. Oh well, they call them ‘carry cots’, so that’s what we do. It’s a long walk, but there’s plenty to see along the way.

Vendors, many having staked out a pitch the night before, try to outdo each other in attracting punters’ attention by wearing the most outrageous orange costume or silly orange hat. There are orange wigs, cowboy hats and feather boas, and inflatable orange crowns, cheeses, and windmills to be worn as headgear. If you haven’t brought one with you, don’t worry – someone else will sell you one.

Suitably stupidly attired in orange t-shirts with absurd inflatables on our heads, it’s off to the famous Vondelpark in the centre of town. The park is traditionally devoted to kids’ activities on Koninginnendag. Under the shady trees, kids try to sell their surplus Buzz Lightyears and Teletubbies videos to the hordes shuffling past. Every child who’s ever learned a tune on the violin or keyboard is out busking, some of them displaying precocious ability. Others show less talent, but still get money for effort and looking cute.

Kids who can dance and kids who can’t put on the CD player and strut their stuff on a sheet of orange plastic. They run coconut shies, or brace themselves to have eggs thrown in their faces, or sell cookies and orange juice (with a shot of vodka if you want it – Dutch liquor licencing laws are very relaxed on Koninginnedag). There are inventive games of chance, like betting on whether the beetle on a modified ouija board will crawl to the picture of George W. Bush, Barack Obama or Osama bin Laden.

Our vote for most original and entertaining event goes to ‘Amsterdam’s Cheapest Skydiving’. For a small fee kids can put on goggles and be strapped into a chair with a large bunch of balloons attached to it. Three young attendants then give the customer a simulated near-death experience. One blows air into the client’s face through a tube, another shakes the chair around in a way calculated to resemble turbulence, while a third scrolls hand-painted pictures first of sky, then of rapidly approaching ground in front of the daredevil’s eyes. Is there any better thrill to be had for a euro?

We take a break for a quick look at the telly to see how the rest of the country is celebrating. Each year the royal family visits different towns in their kingdom and residents turn out in force to entertain their Royal Highnesses with a series of displays and performances, none more than a couple of minutes long.

The Dutch royals pride themselves on their informal relationship with their subjects. Queen Beatrix and her family walk around the chosen town, shaking thousands of hands, filing past displays of pottery by handicapped artists, and stopping to join a bongo drum band of local schoolkids. They slip into a church for a brief organ recital and a concert by a local opera singer, then outside Crown Prince Willem Alexander and his popular, glamorous wife Maxima strap on roller-blades and skate with the locals, occasioning warm applause.

In the late afternoon there’s one more excursion we need to make, into Amsterdam’s canal belt. Spring has already sprung, and we’re unusually lucky to have fine weather. Amsterdam looks even more lovely than usual with the trees wearing their new green growth, and the river of orange-clad humanity flowing underneath.

The canals are packed with boats and the boats are packed with orange partygoers, waving enthusiastically to other orange people on the bridges. The Heineken is flowing freely and the volume dial of every sound system is turned up to 11.

At night the party crowd move on to the Museumplein behind the Rijksmuseum, where the bands play into the night and the orange crowd rocks on.

All in all, it’s a right royal day, a day of the people, for the people and by the people, the only major cost to the state being the cleanup afterwards. This being scrupulously hygienic Holland, cleaning anything is handled with amazing efficiency. By the time we walk back through the Vondelpark in the evening, the garbology team has done its job, and you’d hardly know there’s been a party there. 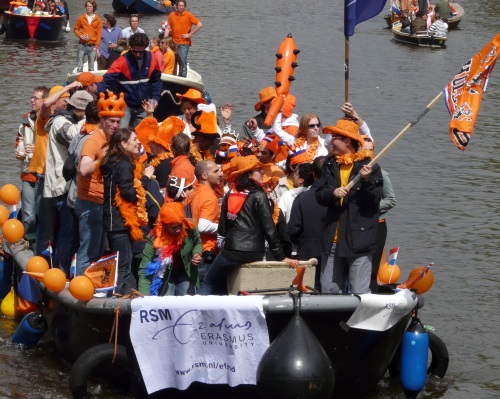